The country’s political focus will shift to the South on Tuesday with elections in Georgia, Alabama, Arkansas and Texas that will signal voters’.. 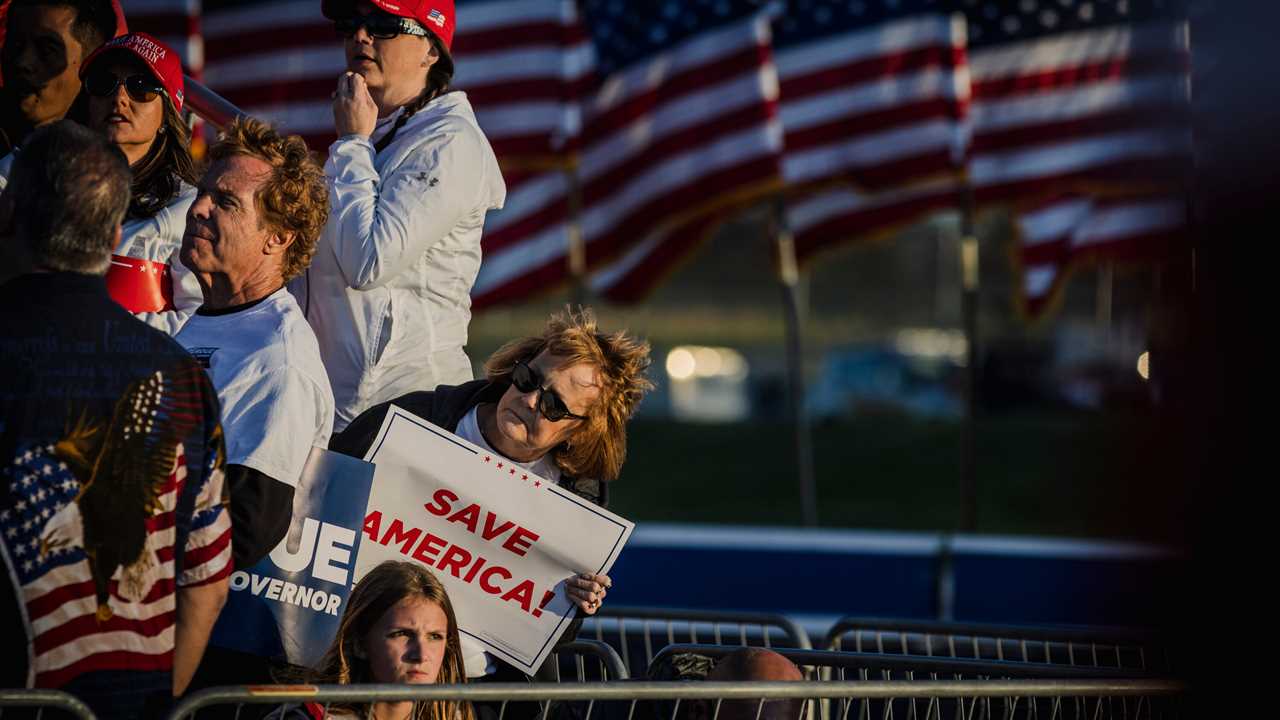 The country’s political focus will shift to the South on Tuesday with elections in Georgia, Alabama, Arkansas and Texas that will signal voters’ views on national issues and the strength of former President Donald J. Trump’s endorsement power.

In Georgia, Gov. Brian Kemp appears to be easily fending off a challenge from former Senator David Perdue in the Republican primary for governor, which would set up a rematch with Stacey Abrams, the presumptive Democratic nominee. Mr. Trump recruited Mr. Perdue to run after Mr. Kemp refused to help overturn the state’s 2020 presidential election results. A Trump-backed challenger is also trying to oust the state’s Republican secretary of state.

In Alabama, a competitive Republican primary for Senate is unfolding after Representative Mo Brooks lost Mr. Trump’s endorsement in the race in March. The election could head to a runoff.

In Texas, voters will decide runoff races for attorney general and a House seat in the Rio Grande Valley. The congressional race will pit Representative Henry Cuellar, an anti-abortion Democrat who remains part of an F.B.I. investigation, against Jessica Cisneros, a progressive challenger.

And in Arkansas, Sarah Huckabee Sanders, Mr. Trump’s former press secretary, is expected to win the Republican primary for governor.

Here are a few of the themes we’ll be following on Tuesday:

In Georgia, Trump’s ‘big lie’ will be tested.

Mr. Trump put Georgia at the center of his crusade against what he has falsely claimed was a “stolen” election. But his influence on the state’s politics has appeared to wane.

Mr. Perdue, a former Kemp ally, has made challenging the results of the 2020 election the focal point of his campaign. He opened all three debates against Mr. Kemp by falsely arguing that he and Mr. Trump were victims of fraud in Georgia’s presidential election and its Senate runoff races in early 2021.

The May 24 primary will feature several Trump-backed candidates in closely watched races.

Yet Georgia Republicans have gravitated toward issues beyond the last election, focusing on the state’s economy, education and rising crime rates in Georgia cities. Partly as a result, Mr. Kemp has outpaced Mr. Perdue by more than 30 percentage points in recent polling and has surpassed the former senator in fund-raising by nearly $10 million.

The only other race in which the 2020 election — and Mr. Trump’s influence — is as prominent is the contest for secretary of state. The Republican incumbent, Brad Raffensperger, is fending off a primary challenge from Representative Jody Hice, who has Mr. Trump’s backing. Polls indicate that neither candidate has garnered more than 30 percent of support from voters, which suggests that the race is likely to go to a runoff.

Still, there are signs of life among Georgia voters: Turnout during the state’s three-week early voting period topped 850,000, a large increase from the same time during the 2018 primary.

This week, Georgia will also kick off one of the country’s most important Senate elections, between Senator Raphael Warnock, a Democrat running for re-election, and Herschel Walker, a Republican backed by Mr. Trump who is widely expected to cruise to victory in his party’s primary.

How will an Alabama Senate candidate fare after being abandoned by Trump?

Representative Mo Brooks, a longtime ally of Mr. Trump’s who was involved in the effort to overturn the 2020 election results, is making a last-minute surge among conservative Alabamans that could lift him into a runoff.

But the race remains anyone’s to win. An Emerson College survey of Alabama voters conducted days before the primary showed Mr. Brooks trailing two rivals: Katie Britt, a businesswoman and the former chief of staff to Senator Richard Shelby, who is leading the pack, and Mike Durant, an Army veteran.

Mr. Brooks faces headwinds at home and in Washington. Mr. Trump’s move to withdraw his endorsement in March damaged the congressman’s reputation among the state’s Republican base.

The House committee investigating the 2021 Capitol riot has asked to interview Mr. Brooks regarding his comments about the former president’s request that he “rescind” the 2020 election results.

And the congressman has made an enemy out of Senator Mitch McConnell, the minority leader, who has poured $2 million into a super PAC opposing his campaign. Mr. McConnell supports Ms. Britt for the seat.

Outside money is playing a big role in this race, with all three top-polling contenders being aided by groups that are spending millions to slam opposing candidates and label them as out of touch with Alabama voters. One group, the pro-Durant Alabama Patriots PAC, cut a television advertisement that goes after Mr. Brooks and Ms. Britt as “Trump-trashing, tax-raising insiders.” Another, the Britt-supporting Alabama Christian Conservatives group, has put forth a negative advertisement targeting Mr. Durant, saying he is lenient on immigration and gun ownership.

“Vote Katie Britt,” the narrator says. “She’s one of us.”

In a Texas House primary, could the abortion issue prove decisive?

Mr. Cuellar is the last anti-abortion Democrat in the House of Representatives. The leak of a draft opinion signaling that the Supreme Court is likely to overturn Roe v. Wade, the landmark abortion ruling, this summer could make the second time the charm for Jessica Cisneros in her bid to unseat him.

Why are these midterms so important? This year’s races could tip the balance of power in Congress to Republicans, hobbling President Biden’s agenda for the second half of his term. They will also test former President Donald J. Trump’s role as a G.O.P. kingmaker. Here’s what to know:

What are the midterm elections? Midterms take place two years after a presidential election, at the midpoint of a presidential term — hence the name. This year, a lot of seats are up for grabs, including all 435 House seats, 35 of the 100 Senate seats and 36 of 50 governorships.

What do the midterms mean for Biden? With slim majorities in Congress, Democrats have struggled to pass Mr. Biden’s agenda. Republican control of the House or Senate would make the president’s legislative goals a near-impossibility.

What are the races to watch? Only a handful of seats will determine if Democrats maintain control of the House over Republicans, and a single state could shift power in the 50-50 Senate. Here are 10 races to watch in the House and Senate, as well as several key governor’s contests.

When are the key races taking place? The primary gauntlet is already underway. Closely watched races in Pennsylvania, North Carolina and Georgia will be held in May, with more taking place through the summer. Primaries run until September before the general election on Nov. 8.

Go deeper. What is redistricting and how does it affect the midterm elections? How does polling work? How do you register to vote? We’ve got more answers to your pressing midterm questions here.

The renewed fight for abortion access has underlined internal Democratic tensions as progressives line up behind Ms. Cisneros and a handful of moderates come to Mr. Cuellar’s defense. On Thursday, Representative Pramila Jayapal, the chair of the Congressional Progressive Caucus, endorsed Ms. Cisneros. National abortion rights groups like Emily’s List have also thrown financial support behind her bid, booking television advertisements that are critical of Mr. Cuellar.

Ms. Cisneros has the backing of several other high-profile progressives in Congress, including Representative Alexandria Ocasio-Cortez and Senators Elizabeth Warren and Bernie Sanders, who have made full-throated fund-raising pitches on her behalf.

Ms. Cisneros fell short by 3.6 percentage points in her 2020 challenge to Mr. Cuellar, whom she once interned for. This time around, his campaign must contend with not only his record on abortion but also an F.B.I. raid of his home and campaign office in February. Mr. Cuellar has promised he did nothing wrong, and his lawyer has said that while he was cooperating with the investigation, he was not the target of it.

Texas’ Democratic primary for attorney general has also placed abortion at its center, as both candidates pitch themselves as would-be defenders of abortion access against their Republican opponents, who are likely to be overwhelming favorites in November.

Rochelle Garza, a civil rights lawyer, is the front-runner in the race, having garnered more of the vote share in the primary than the other Democrat in the running, former Mayor Joe Jaworski of Galveston. Ms. Garza called the office a “last stand” in protecting Texans from strict abortion laws.

Mr. Cuellar is not the only candidate in Texas’ runoff elections on Tuesday who has been the subject of law enforcement scrutiny for the use of his office.

Ken Paxton, the state’s attorney general, was indicted and arrested in 2015 on still-pending charges of securities fraud. Former aides have said he violated state law by using the influence of his office to help a donor.

But he has maintained his viability in the Republican primary by pursuing a laundry list of conservative priorities, including defending an abortion law passed by the state last year and joining the push to criminalize transition care for transgender youths.

With the backing of Mr. Trump and relatively strong support from Texas Republicans, Mr. Paxton garnered a larger share of the vote in the March primary election than his second-round opponent, George P. Bush, the state’s land commissioner.

Sarah Huckabee Sanders is on track to become Arkansas’s governor. What’s next?

Her status has put her on a glide path to the Republican nomination for governor in what is a deep-red state. It also could position her for higher political office, beyond the governor’s mansion.