WASHINGTON — The refusal by Representative Kevin McCarthy, the minority leader, to be interviewed by the House committee scrutinizing the Jan. 6,.. 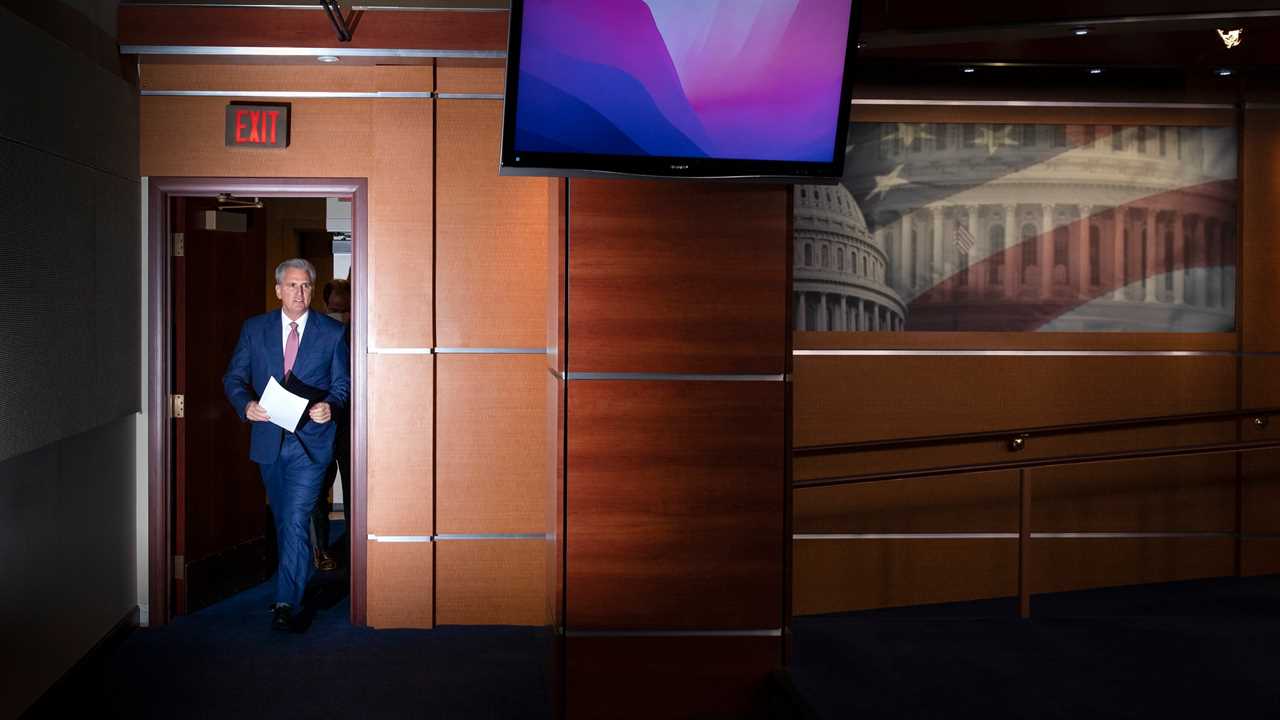 WASHINGTON — The refusal by Representative Kevin McCarthy, the minority leader, to be interviewed by the House committee scrutinizing the Jan. 6, 2021, attack on the Capitol raised the prospect of a subpoena of the highest-ranking House Republican, prompting legal questions with little court precedent and escalating the political stakes of the investigation.

For weeks, members and investigators on the special House panel have privately agonized over how aggressive to be in pursuing sitting members of Congress, weighing their desire for information about lawmakers’ direct interactions with former President Donald J. Trump against the potential legal difficulty and political consequences of doing so.

Now, they are wrestling with whether to subpoena Mr. McCarthy, the man who is in line to be speaker if Republicans retake the House this November, setting in motion a process that could potentially lead to a Democratic-controlled House holding him in contempt of Congress with the midterm elections looming. Congressional investigators have rarely confronted a situation that carries such hefty stakes for their institution.

Behind closed doors, committee and staff members have been researching the law, parliamentary rules and past precedents as they discuss whether to proceed, people familiar with the inquiry said.

Mike Stern, a former senior counsel to the House who has not been involved in the talks, said he had little doubt the committee had the legal authority to issue such a subpoena. The hurdle, he suggested, is the prospect of further shredding congressional norms of comity.

“People have been asking me whether Congress has the power to subpoena their members, and I think the answer is clearly yes, and I haven’t really heard any argument to the contrary,” said Mr. Stern, who served under Republican leaders. “In the context of the highly partisan political fight here, it’s just a very heavy lift.”

Representatives Scott Perry of Pennsylvania and Jim Jordan of Ohio — two lower-ranking Republicans who also spoke with Mr. Trump leading up to, during or after the riot by a mob of his supporters seeking to block Congress from certifying President Biden’s electoral win — had already balked at the committee’s request for voluntary interviews.

Both the Justice Department and a House select committee are investigating the events of the Capitol riot. Here's where they stand:

Mr. McCarthy on Wednesday issued a blistering statement condemning the committee as illegitimate and saying he would refuse to cooperate with its inquiry. On Thursday, he argued that the panel was violating the privacy of Republicans through subpoenas for bank and phone records. Mr. McCarthy also again denounced Speaker Nancy Pelosi, Democrat of California, for having rejected two of his five choices to sit on the panel — one of whom was Mr. Jordan.

“Never did I think a speaker would play such politics,” he declared.

Ms. Pelosi said on Thursday that she would not interfere with the committee’s decision about whether to press forward with subpoenas against Republican members of Congress. But she said she believed that Mr. McCarthy must divulge information about his conversations with Mr. Trump before, during and after the attack.

“I think he has an obligation as we seek the truth to help with that,” Ms. Pelosi said. “It’s up to the committee as to what they do next.”

It is, of course, possible that Mr. McCarthy, Mr. Jordan and Mr. Perry would cooperate with the committee if they were subpoenaed, using the legal threat to justify backing down. But if they continue to balk, the panel has several options for trying to compel their cooperation.

The committee could seek to have the House impose its own punishment on members who defy the panel’s subpoenas, such as censuring them or imposing fines.

It could also declare the recalcitrant members in civil contempt, leading Ms. Pelosi to direct House lawyers to file lawsuits against them seeking judicial orders to comply.

And most drastically, the committee could do what it has done when other high-profile witnesses it deems crucial to its inquiry have defied its subpoenas: vote to recommend holding them in criminal contempt, prompting a House vote to ask the Justice Department to seek criminal charges. Prosecutors have already indicted Stephen K. Bannon, Mr. Trump’s onetime aide, for defying such a subpoena, and are weighing a similar referral about Mark Meadows, Mr. Trump’s former chief of staff.

In a letter on Wednesday, Representative Bennie Thompson, Democrat of Mississippi and the chairman of the committee, said the panel wanted to ask Mr. McCarthy a range of questions about both his efforts to get Mr. Trump to issue a statement calling off the mob during the attack and his conversations with the president in the days after the attack, apparently including efforts to get him to stop challenging Mr. Biden’s victory.

In his statement later that day, Mr. McCarthy accused the committee of an abuse of power, complaining that it “wants to interview me about public statements that have been shared with the world, and private conversations not remotely related to the violence that unfolded at the Capitol.”

Key Figures in the Jan. 6 Inquiry

The House investigation. A select committee is scrutinizing the causes of the Jan. 6 riot at the U.S. Capitol, which occurred as Congress met to formalize Joe Biden’s election victory amid various efforts to overturn the results. Here are some key figures in the inquiry:

Donald Trump. The former president’s movement and communications on Jan. 6 appear to be a focus of the inquiry. But Mr. Trump has attempted to shield his records, invoking executive privilege. The dispute is making its way through the courts.

Kevin McCarthy. The panel has requested an interview with the House Republican leader about his contact with Mr. Trump during the riot. The California representative, who could become speaker of the House after the midterms in November, has refused to cooperate.

Mike Pence. The former vice president could be a key witness as the committee focuses on Mr. Trump’s responsibility for the riot and considers criminal referrals, but Mr. Pence reportedly has not decided whether to cooperate.

Mark Meadows. Mr. Trump’s chief of staff, who initially provided the panel with a trove of documents that showed the extent of his role in the efforts to overturn the election, is now refusing to cooperate. The House voted to recommend holding Mr. Meadows in criminal contempt of Congress.

Scott Perry and Jim Jordan. The Republican representatives of Pennsylvania and Ohio are among a group of G.O.P. congressmen who were deeply involved in efforts to overturn the election. Both Mr. Perry and Mr. Jordan have refused to cooperate with the panel.

Fox News anchors. ​​Texts between Sean Hannity and Trump officials in the days surrounding the riot illustrate the host’s unusually elevated role as an outside adviser. Mr. Hannity, along with Laura Ingraham and Brian Kilmeade, also texted Mr. Meadows as the riot unfolded.

Steve Bannon. The former Trump aide has been charged with contempt of Congress for refusing to comply with a subpoena, claiming protection under executive privilege even though he was an outside adviser. His trial is scheduled for next summer.

Phil Waldron. The retired Army colonel has been under scrutiny since a 38-page PowerPoint document he circulated on Capitol Hill was turned over to the panel by Mr. Meadows. The document contained extreme plans to overturn the election.

Jeffrey Clark. The little-known Justice Department official repeatedly pushed his colleagues to help Mr. Trump undo his loss. The panel has recommended that Mr. Clark be held in criminal contempt of Congress for refusing to cooperate.

John Eastman. The lawyer has been the subject of intense scrutiny since writing a memo that laid out how Mr. Trump could stay in power. Mr. Eastman was present at a meeting of Trump allies at the Willard Hotel that has become a prime focus of the panel.

“I have nothing else to add,” he said.

It is extraordinarily rare for lawmakers to face subpoenas regarding their official activities, but the law raises no clear barrier to it, several legal specialists said.

The so-called speech or debate clause of the Constitution, intended to protect the independence of the legislative branch, says that senators and representatives “shall not be questioned in any other place” about any speech or debate in either chamber, and has been broadly interpreted to cover all legislative actions, not just words. On its face, however, that clause is limited to questioning them in “other” places, like courtrooms.

“The speech or debate clause deals with being questioned in another place, and the House is saying here that ‘the facts are within the control of one of our own, and we need him to share them with us,’” said Michael Davidson, a longtime former legal counsel of the Senate under majorities of both parties.

There is also precedent for the House to subpoena its own members in a narrow context. The House Ethics Committee, which is responsible for investigating allegations of misconduct by members, has authority under the chamber’s rules to subpoena members for testimony or documents, and members are required to comply.

The committee rarely discloses its work, so it is not clear how often it has issued such subpoenas; lawmakers facing ethics inquiries often either voluntarily cooperate or resign. Still, there is at least one public example of a lawmaker fighting a Senate Ethics Committee subpoena in court — and losing.

In 1993, Senator Bob Packwood, Republican of Oregon, was facing an investigation into allegations that he had sexually harassed numerous female staff members, and the ethics panel subpoenaed him to turn over certain pages of his personal diary. He balked, arguing that the request was too broad and violated his rights.

The committee sued him — Mr. Davidson was the lead lawyer — and in 1994, a Federal District Court judge ruled that the subpoena was legitimate and that Mr. Packwood had to turn over the materials. An appeals court and Chief Justice William H. Rehnquist then rejected Mr. Packwood’s request to stay that order while he appealed. Mr. Packwood turned over the pages and eventually resigned under threat of expulsion.

Mr. Thompson has said publicly several times that “nobody is off limits” and that the panel would consider issuing subpoenas for members of Congress who do not voluntarily cooperate with the investigation. In a Jan. 2 interview on NBC’s “Meet the Press,” he said: “I think there are some questions of whether we have the authority to do it. We’re looking at it. If the authorities are there, there’ll be no reluctance on our part.”