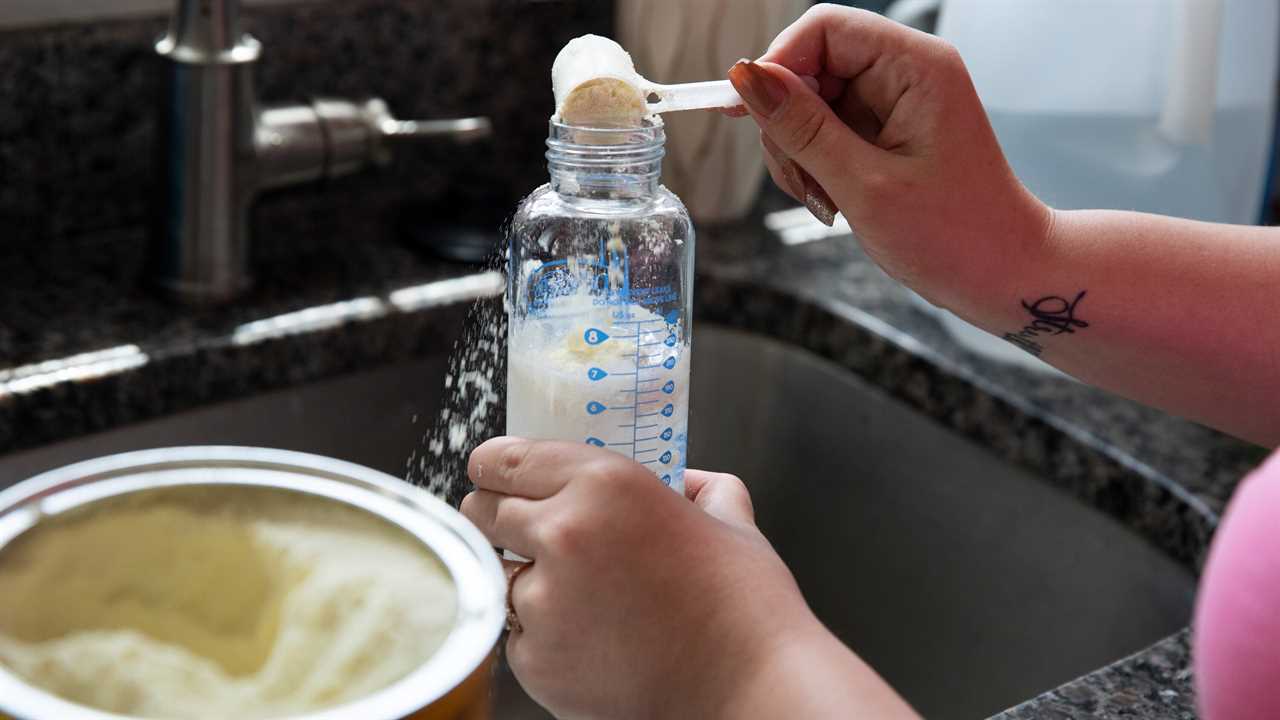 The moves are Mr. Biden’s first major initiative to respond to a crisis that has sown fear and frustration among parents across the country and prompted Republicans and Democrats alike to demand action.

His decision came as the formula shortage was threatening to become a political as well as a public health disaster for the administration, and on the eve of the first congressional hearing, with Dr. Robert M. Califf, the head of the Food and Drug Administration, to delve into how it happened and what is being done to respond.

The White House announced its plan only hours before the House took action of its own, approving an emergency infusion of $28 million for the Food and Drug Administration and a bill to loosen restrictions on what kind of formula can be purchased through the federal food aid program for women and babies.

Under the plan that the White House put forward on Wednesday evening, government agencies could apply to use commercial aircraft owned by the Defense Department to pick up infant formula from overseas and fly it into the United States, getting it onto shelves more quickly. On Monday, the F.D.A. announced that it would streamline approvals so that more overseas companies could make such shipments.

The Defense Department will also use its contracts with commercial air-cargo lines to transport formula products from abroad, bypassing regular airfreight routes to speed up importation and distribution, as the administration did with medical material during the early months of the coronavirus pandemic, administration officials said.

“I know parents all across the country are worried about finding enough infant formula to feed their babies — as a parent and as a grandparent, I know just how stressful that is,” Mr. Biden said in a video posted on Twitter. He had directed his administration “to do everything possible to ensure there’s enough safe baby formula and that it’s quickly reaching families that need it the most.”

Last week, Mr. Biden said the infant formula crisis was his highest priority and promised that parents would see more product on shelves within “weeks or less.”

Officials said invoking the Defense Production Act — a Korean War-era law designed to allow the president to require companies to take actions in the interest of the national defense — would allow the administration to compel suppliers of infant formula components to prioritize the needs of the formula manufacturers over others, helping to increase production and speed up the supply chain.

Several members of Congress, particularly Democrats facing difficult re-election races, have clamored in recent days for Mr. Biden to invoke the law to ease the formula shortage. It was not clear how quickly the impact would be felt.

A White House official, speaking on the condition of anonymity and without authorization to comment on the plan, said it could take time for companies to make use of the Defense Department’s offer to ship formula. But the official added that Mr. Biden was determined to do anything he could to shave even a few days off the manufacture and distribution of formula.

The White House announced the effort as it confronted aggressive questioning by Congress. In recent days, lawmakers have announced plans to haul administration and industry officials to Capitol Hill for testimony, demanded answers from Mr. Biden’s team on how the shortage was allowed to develop, and launched investigations into the crisis and Abbott Nutrition, the company that recalled several of its formula products after at least two infants died.

On Wednesday evening, the House overwhelmingly approved bipartisan legislation that would grant the federal government emergency authority to expand the types of formula that can be purchased with benefits from the Special Supplemental Nutrition Program for Women, Infants and Children, known as WIC. About half the formula sold in the United States is purchased with WIC benefits, and the legislation aims to ensure that those benefits can be used to buy whatever formula is available.

The measure was expected to move quickly through the Senate. But the proposal to issue emergency money for the F.D.A., which passed the House 231 to 192 on Wednesday night, faced a more difficult road amid opposition from Republicans, who said it was a blank check for an agency that had failed to prevent a major crisis.

In a notice sent to rank-and-file lawmakers, Republican leaders charged that Democrats had abandoned bipartisan talks and instead put forward legislation “with no plan to actually fix the problem, all while failing to hold the F.D.A. accountable.”

The WIC measure, by contrast, drew broad support, passing 414 to 9.

“I know what it means to not be able to stretch out milk for the entire month,” Representative Jahana Hayes, Democrat of Connecticut and a sponsor of the bill, said this week. Ms. Hayes, who said she had used WIC benefits to purchase formula, added, “with everything going on right now, the last thing a family should have to worry about is feeding their children.”

Representative Michelle Steel, Republican of California, who partnered with Ms. Hayes and Representative Robert C. Scott, Democrat of Virginia, on the measure, said “families deserve to have this weight lifted off their shoulders.”

Navigating the Baby Formula Shortage in the U.S.

A growing problem. A nationwide shortage of baby formula — triggered in part by supply-chain issues and worsened by a recall by the baby food manufacturer Abbott Nutrition — has left parents confused and concerned. Here are some ways to manage this uncertainty:

Checking your supplies. Abbott Nutrition has recalled several lots of its Similac, Alimentum and EleCare formulas after at least four babies became sick with bacterial infections. To find out whether a formula in your home may be affected by the recall, check the lot number on the Abbott website. If you learn that you fed your child a recalled product, contact your pediatrician.

Finding formula. If your baby’s formula was not affected by the recall, but is still not available, you can try calling local stores to ask when they expect to get it back in stock. You may also be able to buy it online. If your baby is on special formula, reach out to your doctor’s office: They might have samples in stock.

Picking a new formula. If you typically use a name-brand formula, look for its generic version. Alternatively, seek a new formula that matches the ingredients listed in your usual one. If your baby is on a special formula for health reasons, check with your pediatrician before switching.

Transitioning to a new product. Ideally, you will want to switch your child gradually. Start by mixing three quarters of your usual formula with one quarter of the new one and gradually phase out the old product. If you can’t transition gradually because you’ve run out of your usual formula, that’s OK, although you might notice more gassiness or fussiness during the transition.

What not to do. If you can’t find your baby’s usual formula, don’t make your own — homemade formulas are often nutritionally inadequate and at risk of contamination. Don’t try to “stretch” your formula by adding extra water, and don’t buy it from unvetted online marketplaces like Craigslist. For a baby less than 1 year old, don’t use toddler formula.

Senator Chuck Schumer, Democrat of New York and the majority leader, said he would move quickly to bring up the bill and pass it in that chamber. Supporters said they were confident that if necessary, it could clear the 60-vote threshold required to advance most legislation.

“I feel, based on initial reaction, that we should be successful with 60 votes,” said Senator Debbie Stabenow, Democrat of Michigan. “This is so basic. Everyone understands that we’re all on high alert here, and this is an incredible emergency.”

But most House Republicans opposed the emergency spending package, which they called overly broad. The three-page bill is intended to provide the agency with additional money to shore up its staff, which is responsible for monitoring the formula market and inspecting formula before it is shipped to stores.

Democrats defended the spending measure, pointing out that it would require that the agency send weekly reports to Congress outlining how the money is being spent.

“Anybody who says that that’s too much money to spend for the safety and well-being of our babies, I just don’t agree with,” Speaker Nancy Pelosi, Democrat of California, said on Tuesday. “Period.”

The action in the House came as lawmakers on both sides of the Capitol were demanding answers about the formula shortage and weighing more legislation aimed at responding. Dr. Califf, the head of the F.D.A., was scheduled to appear before the House Appropriations Committee on Thursday, and again before the House Energy and Commerce Committee next week. That hearing was also to feature testimony from senior officials at Abbott and other top manufacturers of infant formula.

Senator Bob Casey of Pennsylvania and other Democrats put forth a bill that would broaden the F.D.A.’s authority to collect information from companies and require manufacturers of essential nutritional products to provide timely notifications of potential supply disruptions.

Senator Ron Wyden, Democrat of Oregon and the chairman of the Finance Committee, announced on Wednesday that he had asked for information about tax and stock buyback practices at Abbott Laboratories, which oversees the nutrition branch, as well as how much money went toward the shuttered formula processing plant. Senators Elizabeth Warren of Massachusetts and Cory Booker of New Jersey, both Democrats, wrote a similar letter demanding details about how the “prioritization of profit over safety and public health has created this crisis.”

“Abbott is a responsible and transparent taxpayer, paying all of its taxes owed in every country in which it operates around the world,” said Jonathon Hamilton, a spokesman for Abbott. He added that “stock buybacks are not impacting our ability to invest in or reopen our Sturgis manufacturing facility” in Michigan.