BORIS Johnson’s five-point Winter Covid Plan was today unveiled – and hails jabs as the main wall of defence.Sajid Javid laid out the Government’s..

Sajid Javid laid out the Government’s strategy to keep the virus at bay throughout the colder months when the NHS usually comes under strain. 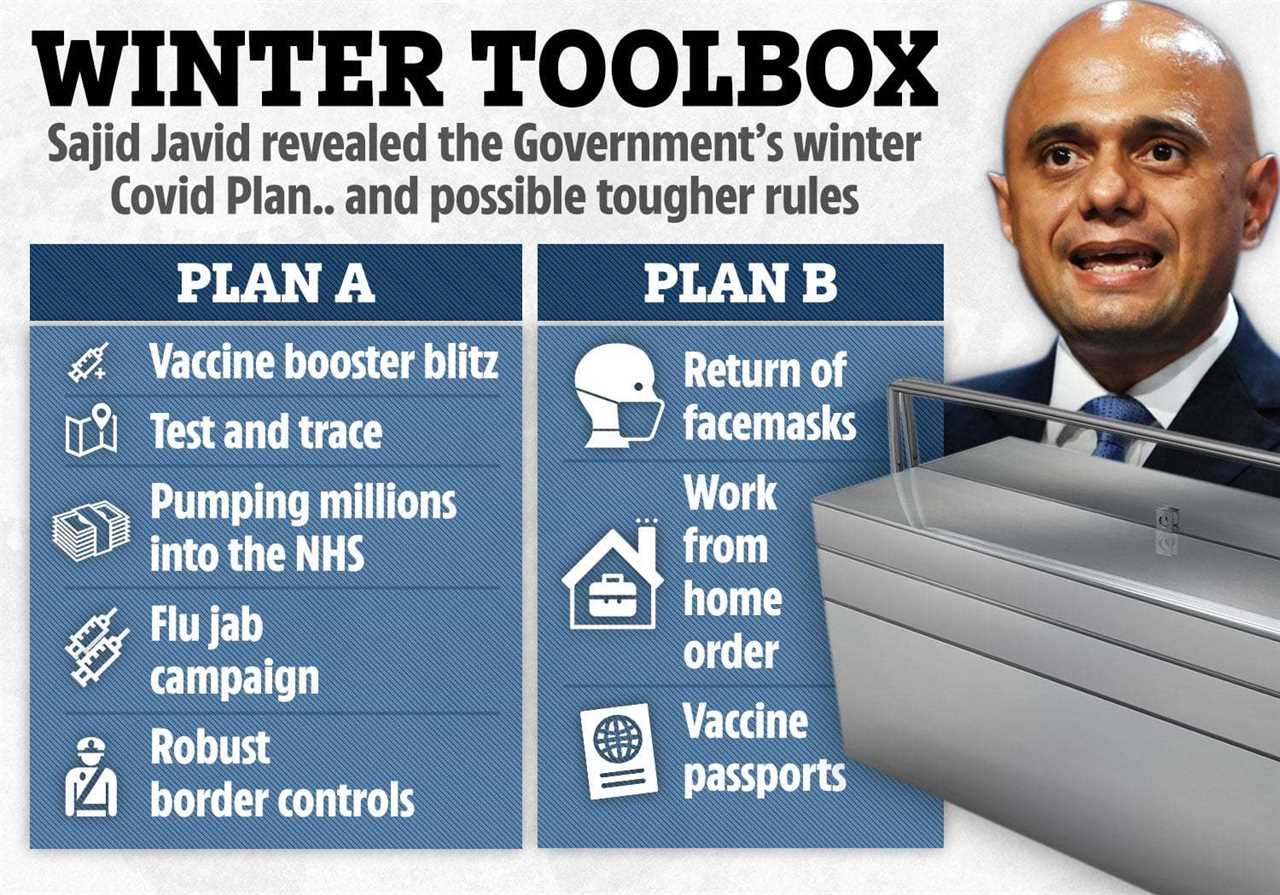 The Health Secretary set nerves jangling when he announced Plan B measures to reimpose masks, working from home and even revive hated vaccine passports.

Ministers are banking on a fresh vaccine push will throw a protective shield over the population heading into the winter.

Boffins at the JCVI jabs taskforce today gave the green light to an autumn booster campaign for the over-50s and most vulnerable.

Kids aged 12-15 will be given a single shot of Pfizer to prevent classrooms becoming Covid hotbeds as schools return.

The Government will also double down efforts to encourage eligible unvaxxed Brits to get jabbed.

Mr Javid told the Commons: “The latest statistics from the ONS show that almost 99 per cent of Covid-19 deaths in the first half of this year were people who had not received both doses of a Covid-19 vaccine.”

The Test, Trace and Isolate system will remain in place, with free rapid tests still available even for asymptomatic Brits.

Routine testing will be rolled out in schools and higher risk settings.

And he assured that cash will be handed out to poor people who are forced to self-isolate.

The Health Sec said: “We don’t want people to face hardship for doing their duty and self-isolating.”

The NHS is not only grappling with Covid cases – but also a huge backlog of non-Covid patients that had appointments axed during lockdown.

Mr Javid has warned the backlog could reach 13million and will “get worse before it gets better”.

Last week the PM announced a further £5.4billion cash boost for the health service to shore up capacity in the next six months.

Mr Javid also said he expected hospital and care staff to be jabbed.

Ministers and doctors fear the seasonal flu outbreak could lumber further strain upon the NHS.

Mr Javid said: “Along with our COVID-19 vaccination programme, the next few months will see the largest ever flu vaccination campaign this country has ever seen.”

The Government will also try to limit the spread of winter bugs by urging people to meet outdoors, keeping rooms ventilated, hand-washing and wearing a mask.

The HealthSec said tough border controls would be kept to root out any dangerous variants coming into the UK.

He said: “We’ll maintain our strong defences at the border, allowing us to identify and respond to variants of concern.

“It’s these defences, and the progress of vaccination campaigns both here and abroad, that have allowed us to manage the risks, and start carefully reopening international travel once again.”

Meanwhile the Government is working with allies to accelerate the jabs campaign in poorer countries.