BORIS Johnson DID know about a previous complaint made against shamed MP Chris Pincher, No10 finally admitted this afternoon.In a U-turn on past..

BORIS Johnson DID know about a previous complaint made against shamed MP Chris Pincher, No10 finally admitted this afternoon.

In a U-turn on past statements, Downing Street confirmed the PM was told of allegations before appointing Pincher as deputy chief whip earlier this year. 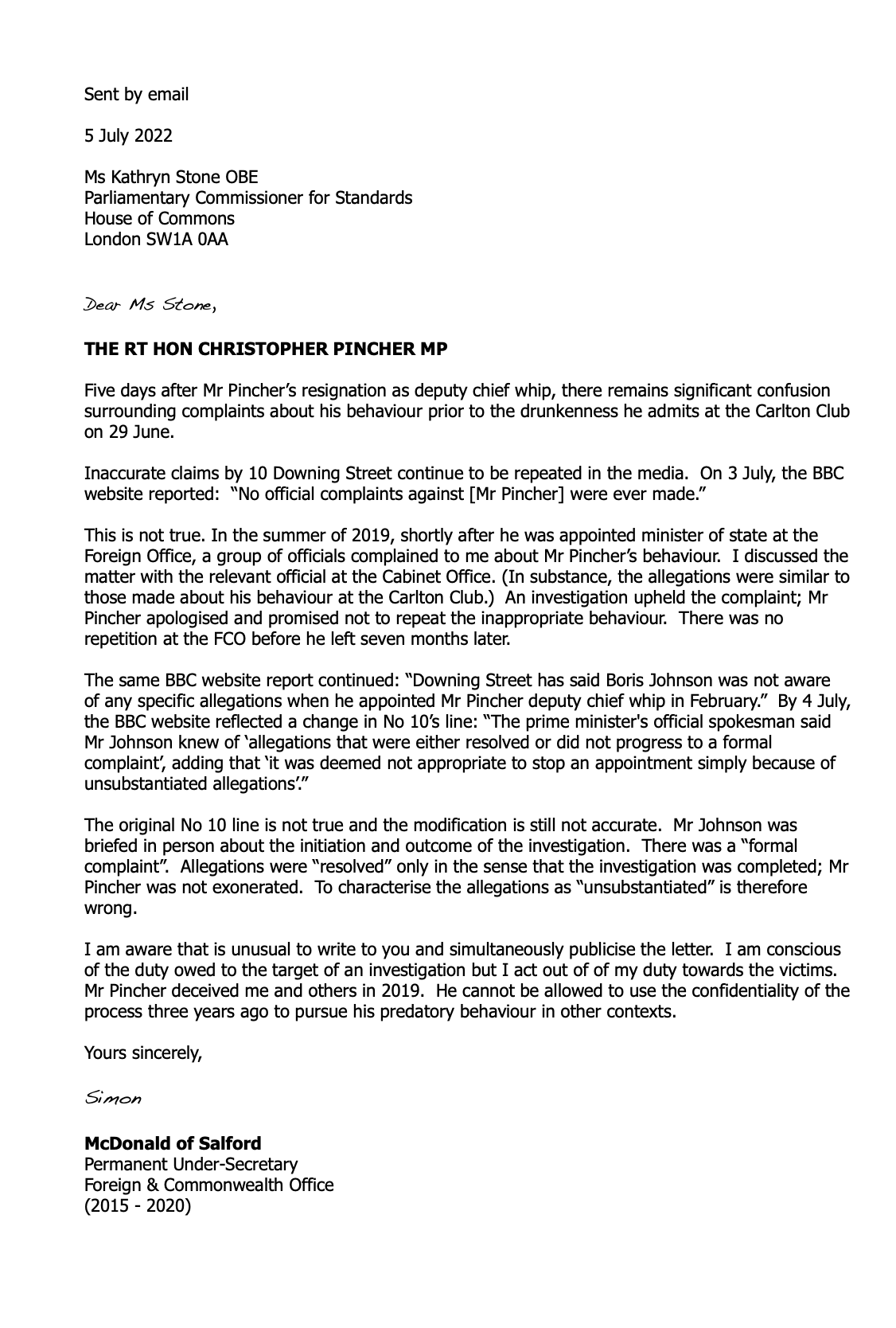 The PM’s spokesman said the Mr Johnson was personally briefed in 2019 about an incident relating to Pincher’s “inappropriate behaviour”.

Until today No10 has insisted Mr Johnson only knew of allegations that were found to be untrue or were just rumours.

But they were forced to change their position today after a former top Foreign Office mandarin published an explosive letter accusing Downing Street of lying.

Lord McDonald said Mr Johnson was aware of a complaint made by Foreign Office staff which was upheld by investigators.

Asked why No10 had not admitted this in the days after Trending In The News revealed Pincher’s alleged groping, the PM’s official spokesman suggested Mr Johnson had forgotten.

He said: “This dates back a number of years. On Friday, it was our belief that he was not informed about that specific incident.”

Lord McDonald said the PM was categorically told about a formal complaint made against Pincher in 2019 when the disgraced MP was a Foreign Office minister.

He claimed today: “Mr Johnson was briefed in person about the initiation and outcome of the investigation.

“Allegations were ‘resolved’ only in the sense that the investigation was completed; Mr Pincher was not exonerated.”

Lord McDonald – the Foreign Office’s most senior civil servant from 2015-2020 – has written to Parliament’s sleaze-buster.

This morning Deputy PM Mr Raab rejected these accusations and insisted the PM was never briefed about the investigation into Pincher.

Last week Pincher resigned as deputy chief whip after Trending In The News revealed he allegedly made drunken gropes at two men in a glitzy private members’ club.

Since then, a wave of allegations about the Tamworth MP spanning a decade have come out.

No10 yesterday denied the PM knew about any upheld complaints into Pincher, after previously saying he was not aware of any “specific complaints.”

They say this is why Mr Johnson promoted him last February to deputy chief whip, a position which amazingly has a welfare officer role.

But the accusations from Lord McDonald call Downing Street’s promises into question.

Speaking on BBC Radio 4 this morning, Mr Raab insisted the PM did not know about the foreign office complaint.

He said: “In relation to what happened in 2019, I’m not aware that the Prime Minister was briefed directly about it.

“I have discussed this with the Prime Minister over the last 24 hours, it is not my understanding that he was directly briefed.”

He added: “In relation to the 2019 allegation or complaint, whilst there was inappropriate behaviour, it didn’t trip the wire into disciplinary action.”

The latest crisis to rock No10 risks overshadowing the PM’s Cabinet today where he had planned to hail tax changes.

Many of Mr Johnson’s top team have been sent out on to the airwaves to defend him in recent days.

Labour’s deputy leader Angela Rayner said: “It is now clear that the Prime Minister knew about the seriousness of these complaints but decided to promote this man to a senior position in government anyway.

“He refused to act and then lied about what he knew.”

This morning Michael Fabricant poured fuel on the fire raging in his party when he suggested Pincher is a “victim in his own way”.

Speaking on BBC Radio 5 Live, the eccentric Tory MP suggested some of his colleagues feel “very sorry” for Pincher.

He said: “On the one hand, of course, we’re all very sorry for people who’ve been affected by Chris’s actions but we also quite frankly feel very sorry for Chris in many ways.”