EMBATTLED Boris Johnson came out swinging yesterday and insisted he would not quit over the Partygate storm.In a heated Commons showdown, the Prime..

EMBATTLED Boris Johnson came out swinging yesterday and insisted he would not quit over the Partygate storm.

In a heated Commons showdown, the Prime Minister branded Labour leader Sir Keir Starmer a lightweight — and a “lawyer not a leader.” 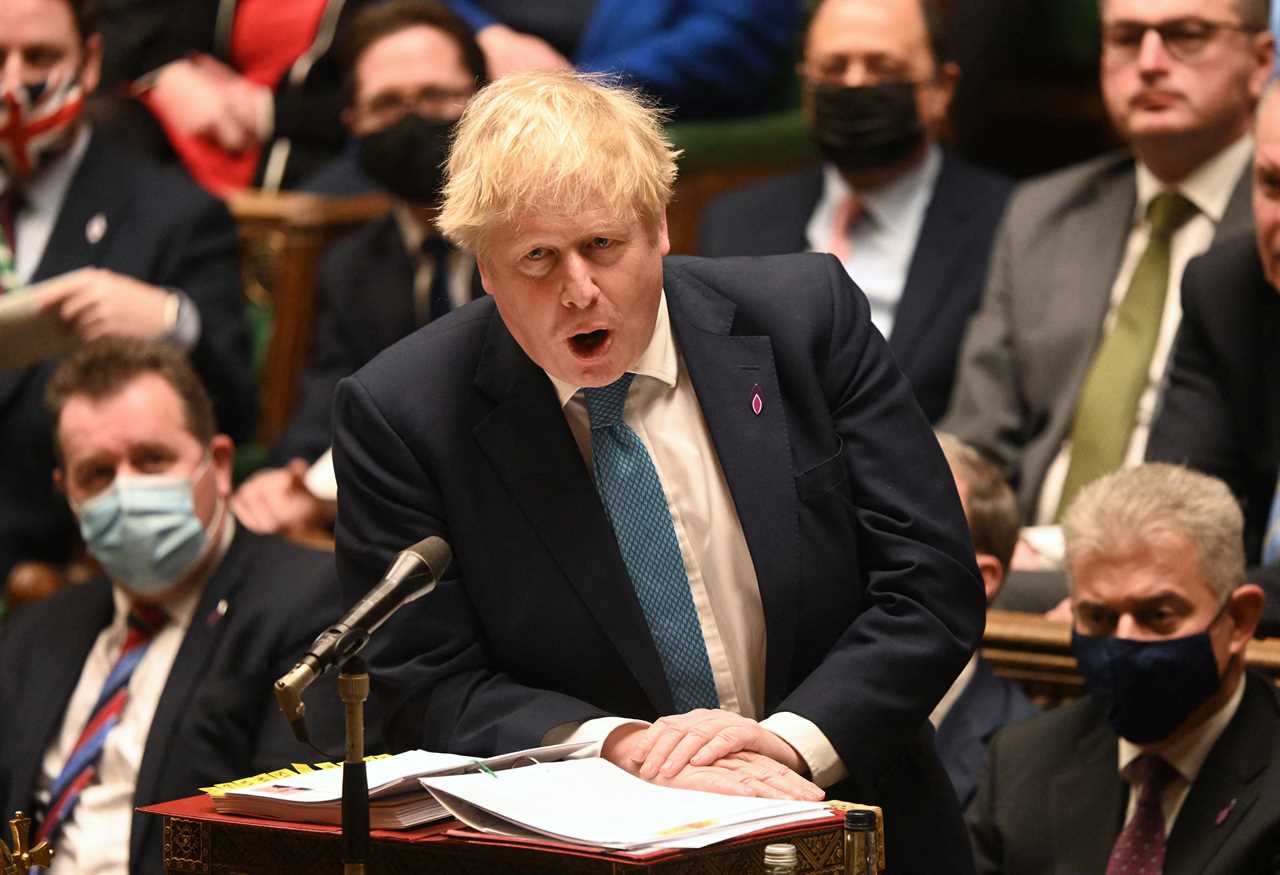 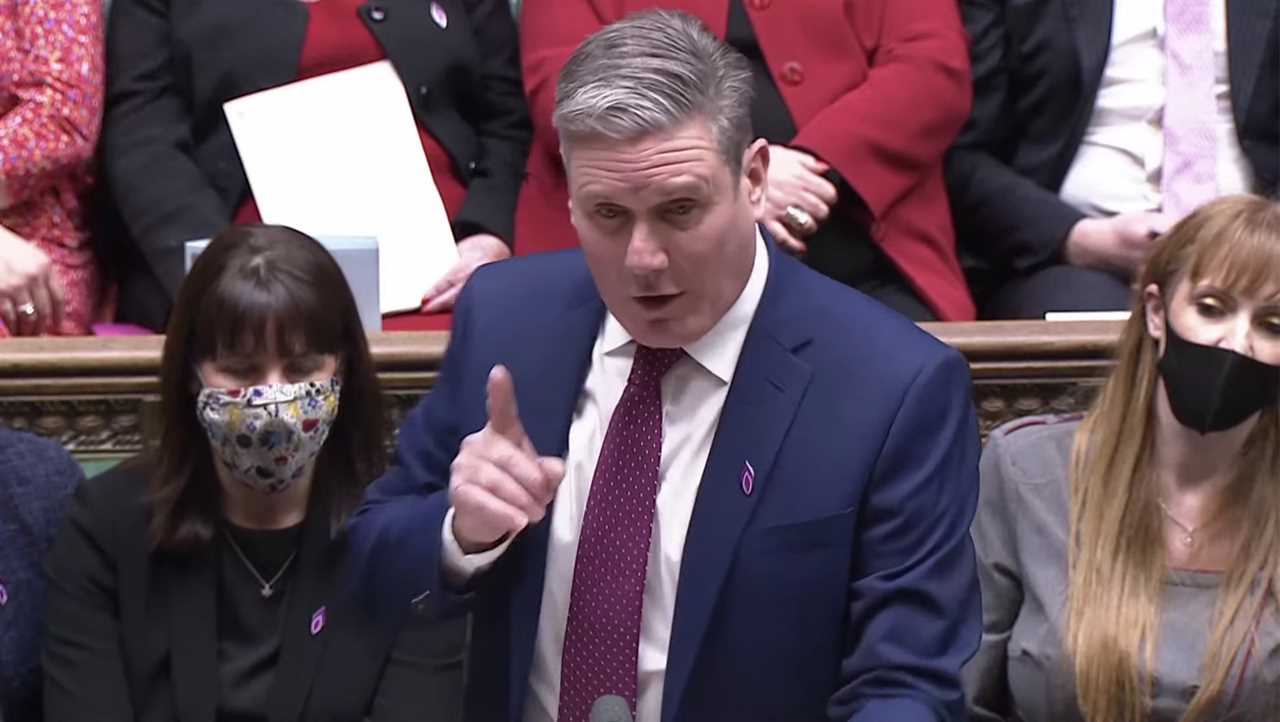 While the wait for the findings of Sue Gray’s make-or-break probe into No10 parties continued, BoJo took direct aim at “Captain Hindsight” Sir Keir.

Mr Johnson — who has had string of headaches to contend with — fumed: “He has flip-flopped from one side to the other.

“It is precisely because we didn’t listen to Captain Hindsight that we have the fastest-growing economy in the G7 and we have got all the big calls right.”

To roaring cheers from the majority of Tory MPs, Mr Johnson declared: “We have taken the tough decisions, we have got the big calls right and we are — and in particular I am — getting on with the job.”

Hopping mad Sir Keir repeatedly called for the PM to resign after police opened a probe into alleged No10 lockdown breaking.

But Mr Johnson hit back: “We are getting on with the job, and I think he needs to raise his game, frankly.”

Pushed repeatedly if he would throw in the towel over claims he has misled Parliament about the gatherings, the PM replied with an emphatic “no”.

He added: “There was an invitation for me to do what of course the Labour Party want me to do.

“But I’m not going to do it. We are going to carry on with our agenda of uniting and levelling up across the country.

But he said Sir Keir wanted him gone simply because “he knows that this Government can be trusted to deliver”.

Mr Johnson’s rallying cry came as Downing Street faced an increasingly agonising wait for the findings of the Partygate inquiry — which were delayed again yesterday.

Lawyers, cops and Whitehall HR officials are poring over civil servant Sue Gray’s report line by line amid concerns that publishing it in full could jeopardise the police inquiry into the affair.

Some sources last night suggested it may be Monday before it can be released as MPs start to leave Westminster for the weekend from tomorrow afternoon.

But rather than waiting to learn of the findings, Labour spent yesterday’s Prime Minister’s Questions setting telling Mr Johnson to go immediately.

Hitting back, the defiant PM pointed to his success in guiding Britain through the Covid crisis and skewered Labour’s “relentlessly opportunistic” record during the pandemic.

And he branded the Labour boss “a lawyer not a leader”.

He went on: “He talks about the most serious issue before the public and the world today.

“It is almost as though he was in ignorance of the fact that we have a crisis on the borders of Ukraine. I can tell him that in the Cabinet Room of this country, the UK Government are bringing the West together.

“Led by this Government and this Prime Minister and our Foreign Secretary and Defence Secretary, we are bringing the West together to have the toughest possible package of sanctions to deter President Putin from what I think would be a reckless and catastrophic invasion.”

The Commons ding-dong came as Brexiteer allies of the PM launched a last-ditch “save Boris” campaign as they fear the EU divorce will be thrown into peril if he is ousted, Trending In The News understands.

They are helping to run a shadow whipping operation to drum up support for the embattled leader.

The Brexiteers reckon none of the frontrunners to succeed Mr Johnson — including Chancellor Rishi Sunak and Foreign Secretary Liz Truss — can be trusted to face down the EU in the hated Northern Ireland protocol row.

One senior Brexiteer told Trending In The News: “There has been a rallying in the parliamentary party over the past week.

“The party has stared into the abyss and worked out it’s not all it is cracked up to be.

“And for those who want Brexit — who is going to stand up for it? If you think it’s Rishi, then think again.

“There are a lot of question marks over the leadership contenders.”

They have pledged their support for Mr Johnson — for now at least — based on the twin hopes that he will tear up the NI protocol and slash taxes and regulation.

And they still see him as a winner who can defeat Labour in corners of the country other potential Tory leaders cannot reach.

The senior MP added: “Why is Labour so desperate to get rid of him? They fear him. He can turn things around.”

Yesterday, leadership contender Ms Truss swore loyalty to her boss, saying she backed him “100 per cent”.

Asked if Mr Johnson should resign if he has broken the law or misled Parliament, she told Sky News: “The Prime Minister has appeared before Parliament, he has apologised for what has happened.

“He’s admitted that mistakes were made and I 100 per cent support him, and want him to continue as Prime Minister.”

Wavering Tory MPs have been recruited to a new “support group” on WhatsApp, with the PM dishing out meetings to his worried backbenchers.

In a bid to see off a vote of no confidence in his premiership, Mr Johnson met with more than a dozen backbenchers yesterday to hear their concerns.

Sources say they brought “a shopping list” of complaints and suggestions on how the PM can turn it around.

Some told him that he must get a grip on his Downing Street machine, and “start governing like an actual Tory”.

Others have called on him to ditch April’s National Insurance contributions raid as a price for their continued support.

The planned 1.25 percentage points hike to help pay for the NHS would raise £12billion.

But critics of the move have been emboldened by better-than-feared borrowing figures.

One MP told Trending In The News: “The PM has the room to move on that if he is really serious about calming the horses.” 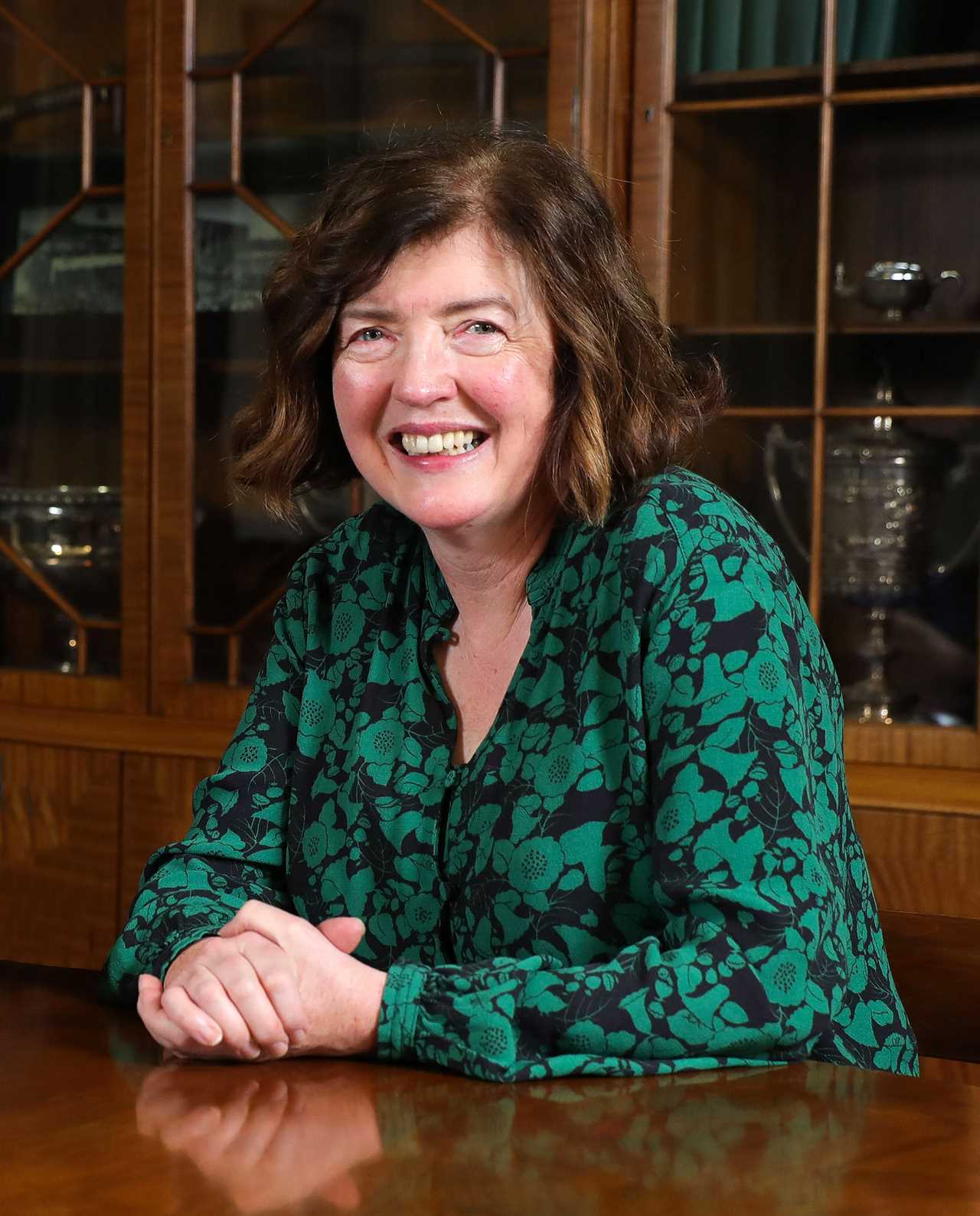 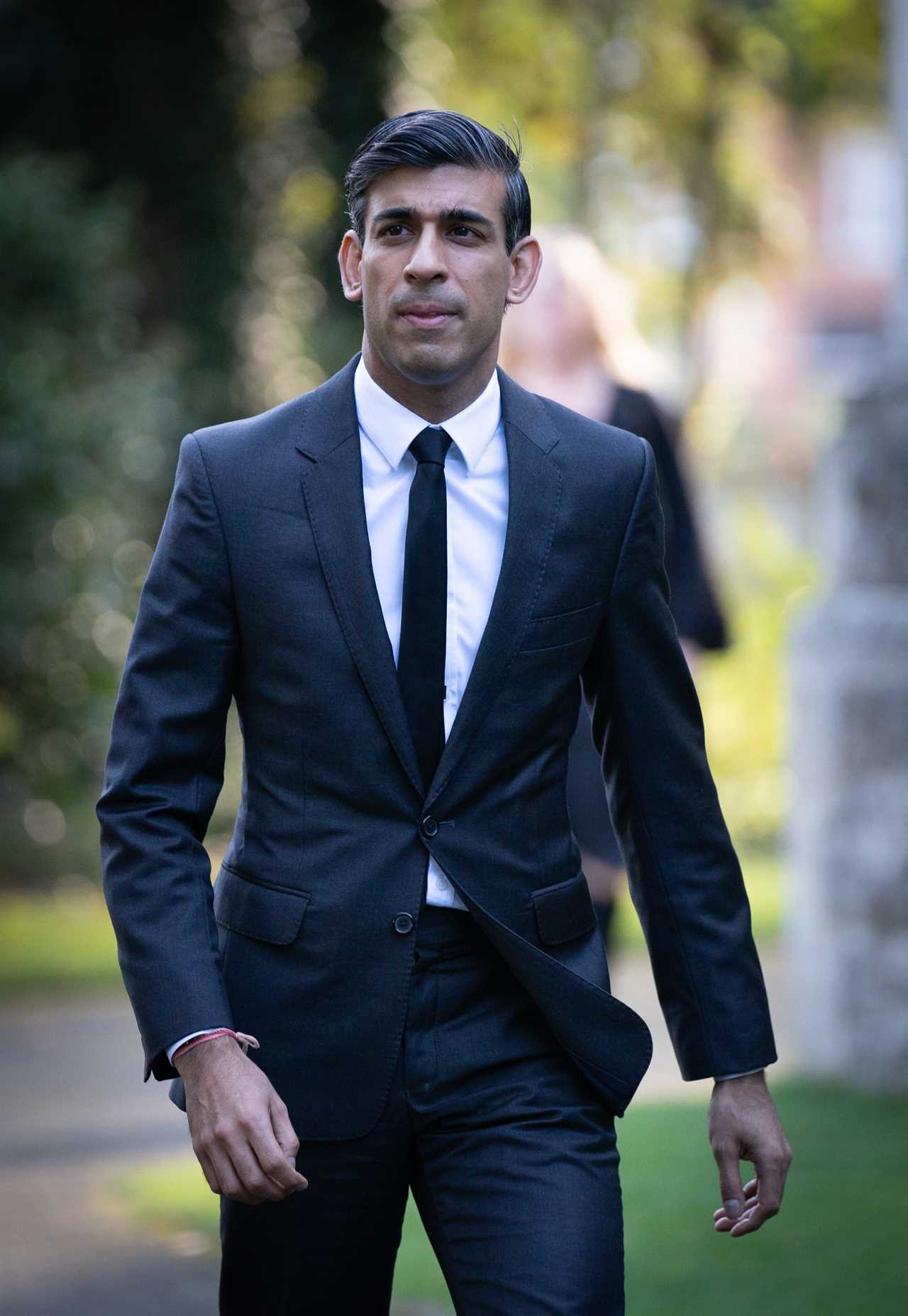 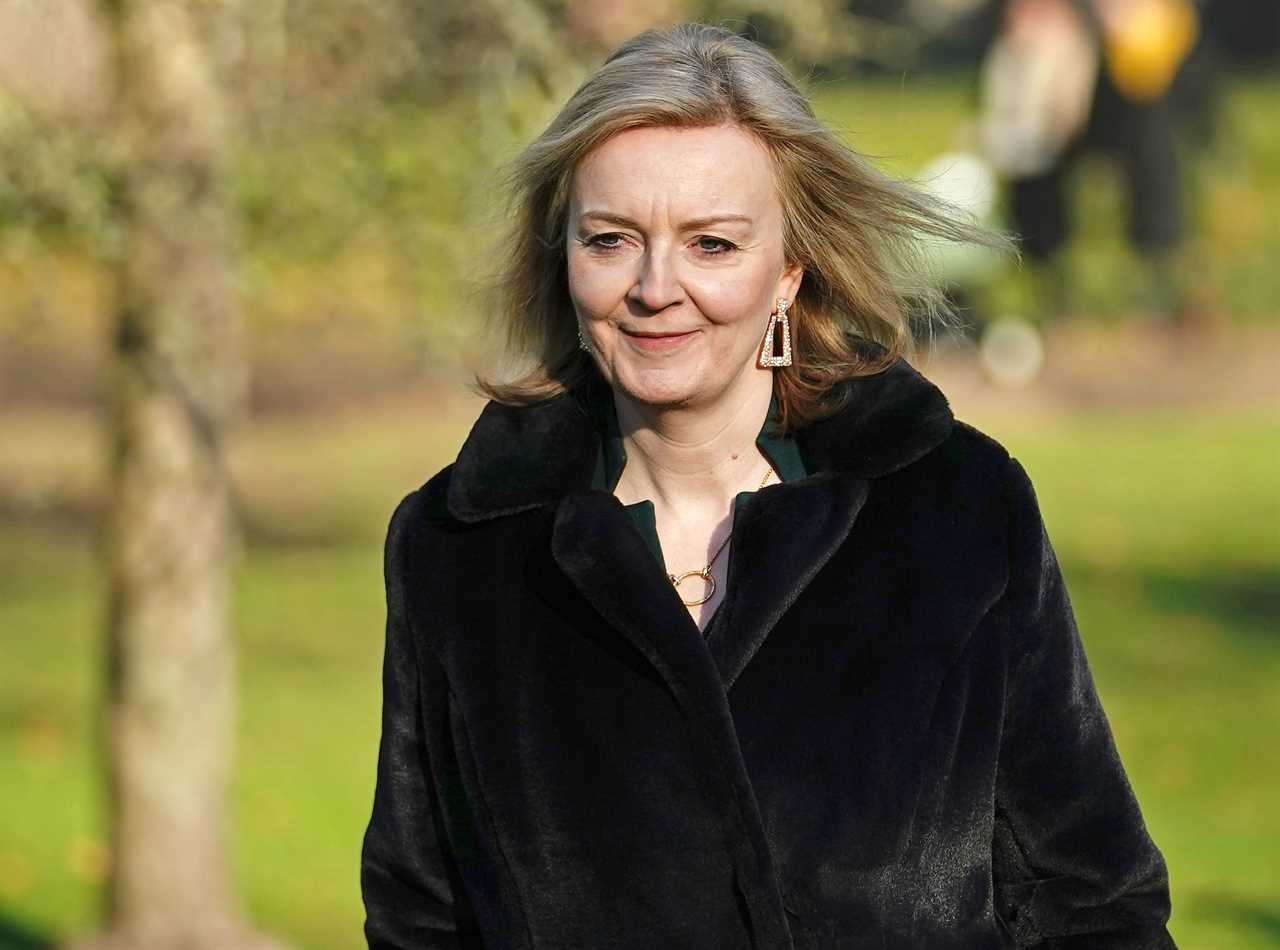