BORIS Johnson is greeting world leaders in Glasgow for the COP26 eco summit where he’s demanding they wake up to the perils of climate change. In a..

BORIS Johnson is greeting world leaders in Glasgow for the COP26 eco summit where he’s demanding they wake up to the perils of climate change.

In a sobering speech at midday the PM will warn that time is running out to save the planet and demand they act now for the sake of their kids and grandkids. 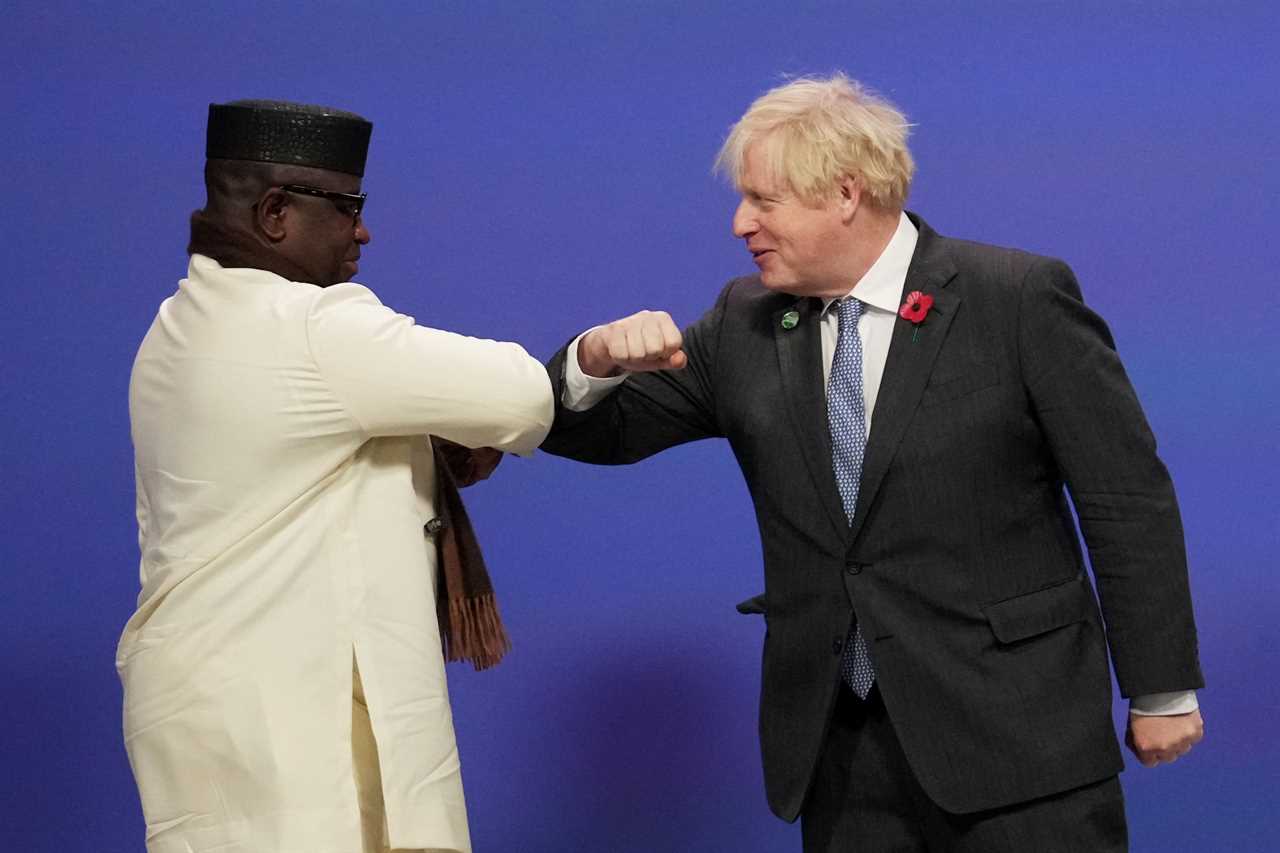 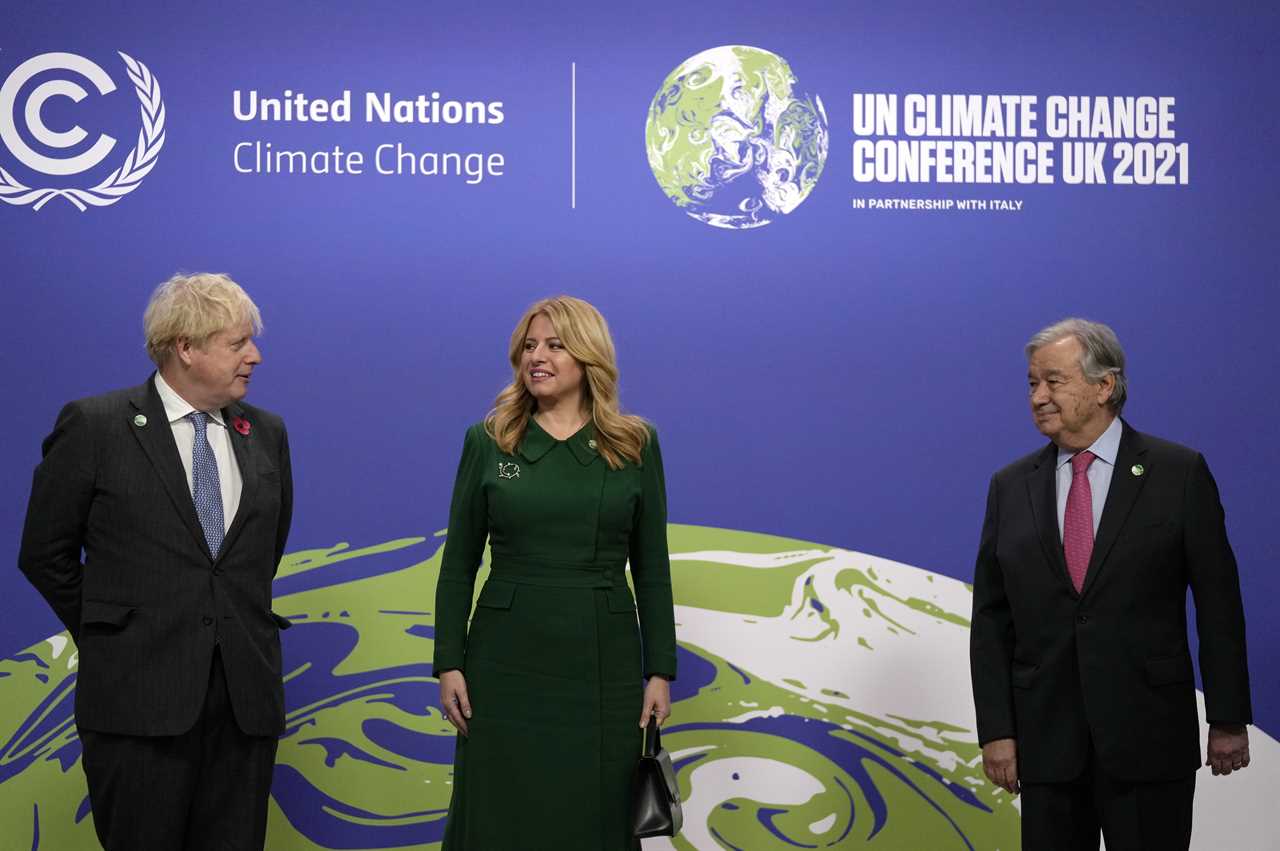 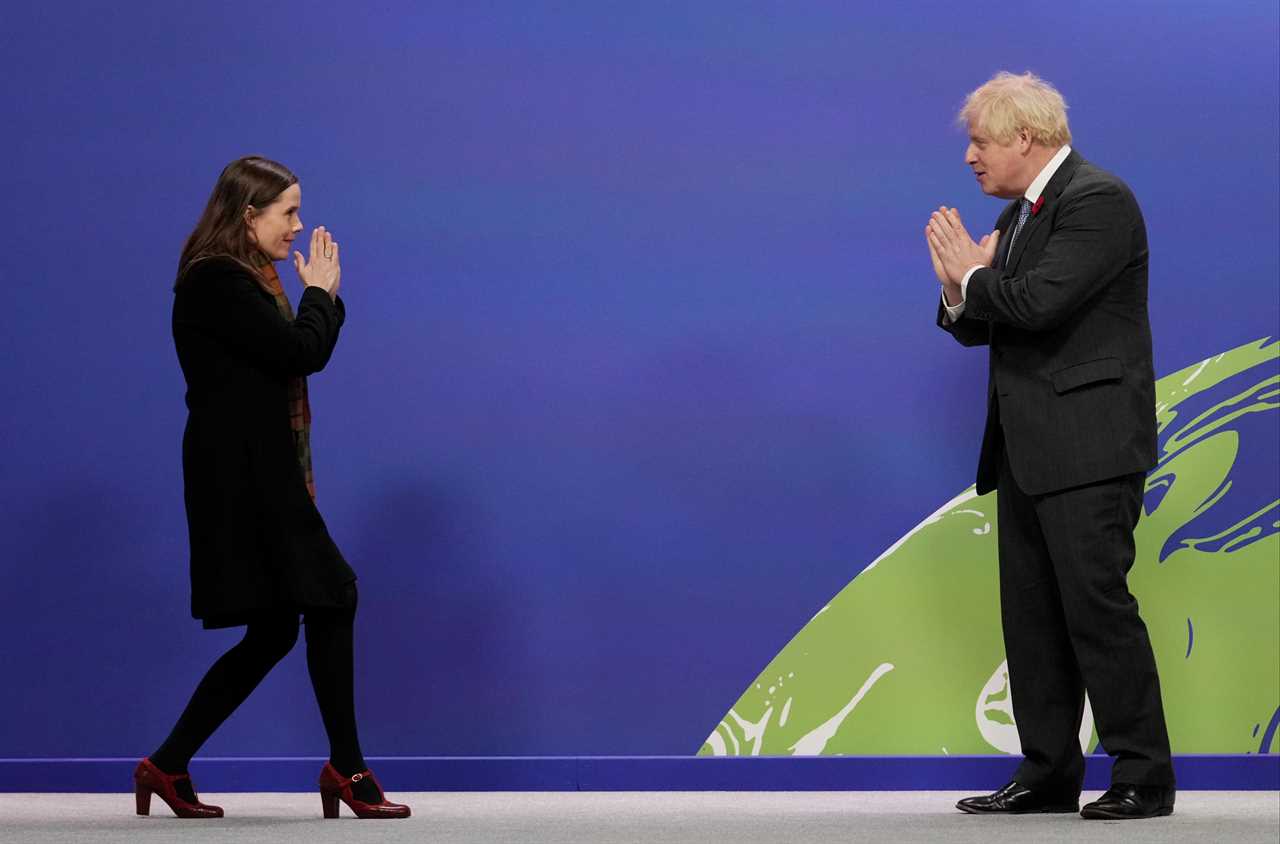 Ahead of banging heads together, beaming Boris bumped elbows with global counterparts as he welcomed them to rainy Scotland this morning.

Standing on the conference stage with a huge picture of Planet Earth he dialled up the charm for the men and women he’s desperate to get onside.

But he’ll be deadly serious when he later pleads with them for cast-iron guarantees to stop cooking the ozone with fumes.

He’ll tell leaders including Joe Biden and Emmanuel Macron: “Humanity has long since run down the clock on climate change.

“It’s one minute to midnight and we need to act now.

“If we don’t get serious about climate change today, it will be too late for our children to do so tomorrow.”

Mr Johnson has staked his legacy on making COP26 a success by getting plans for from countries to limit global warming to 1.5C as agreed in Paris six years ago.

Hopes of clinching a deal are fading fast after presidents from arch-polluters China and Russia pulled out and a furious Brexit bust-up with the French risked overshadowing the whole event.

In an eve of summit blow, G20 leaders yesterday watered down their Net Zero pledge.

They only promised to hit the target by “mid century” rather than by 2050, as Britain had originally hoped.

While original commitments to “refrain from building new unabated coal power generation capacity in the 2030s” have been ripped out and replaced by a wishy washy language.

In a last-gasp bid to snatch a victory Mr Johnson will say: “We have to move from talk and debate and discussion to concerted, real-world action on coal, cars, cash and trees.

“We need to get real about climate change and the world needs to know when that’s going to happen.”

The PM admitted the world had only “inched forward” in the fight against climate change at the G20.

In a sobering assessment at a press conference in Rome last night he said the chances of  success in Scotland are still around six out of ten.

He added: “I think 1.5 C is very much in the balance. Currently we are not going to hit it.”

Britain is laying on a two-week charm offensive to try to coax and cajole the world’s leaders into taking action on climate change.

The Royal family are laying on a glitzy reception for politicians in Glasgow tonight, with Kate and William and Charles and Camilla all enlisted to work their magic on politicians.

And the Queen will deliver a video message urging the globe to act after she was ordered to stay home and rest by her doctors.

Boris will vow to lead by example by pumping an extra £1billion into projects to tackle climate change by 2025 – provided the UK economy grows as forecast.

Back in 2015, world leaders agreed to the Paris Accords which vowed to try to limit global warming to 1.5C.

But there is growing alarm that the target is irretrievably slipping as much of the globe – including China and Russia – keep guzzling mountains of polluting coal every year.

He will say this can be done by weaning countries off coal and gas guzzling cars, providing cash and planting trees.

But there are fears COP could flop as many of the world’s biggest polluters are snubbing the summit altogether.

Yesterday, ministers and British climate experts urged the world to get on a war footing to stop climate change scorching the earth and killing future generations.

Tory peer Climate Change Tsar Lord Deben said: said it is a battle which simply “we just have to win”.

He added: “It’s like, in that sense, the Battle of Britain, we cannot possibly lose it.”
Alok Sharma, Cop26 President and Cabinet minister, warned that some countries will end up “under water” even if global warming is limited to 1.5C.

He said: “At 1.5C, there will be countries in the world that will be under water and that’s why we need to get an agreement here on how we tackle climate change over the next decade.”

To world leaders, he added: “My message to them is very clear: leave the ghosts of the past behind you – it is Halloween today, after all.” 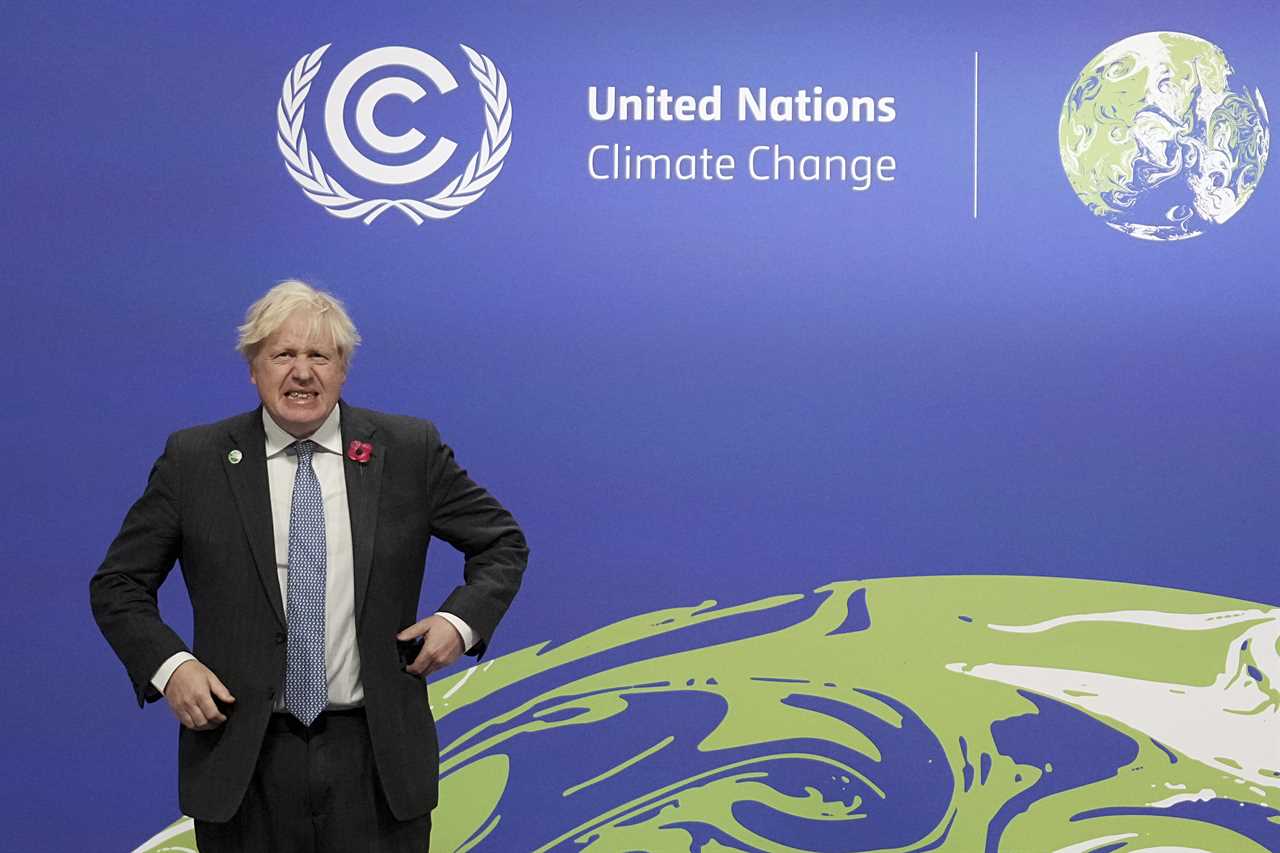 Boris Johnson is desperate to make COP26 a success 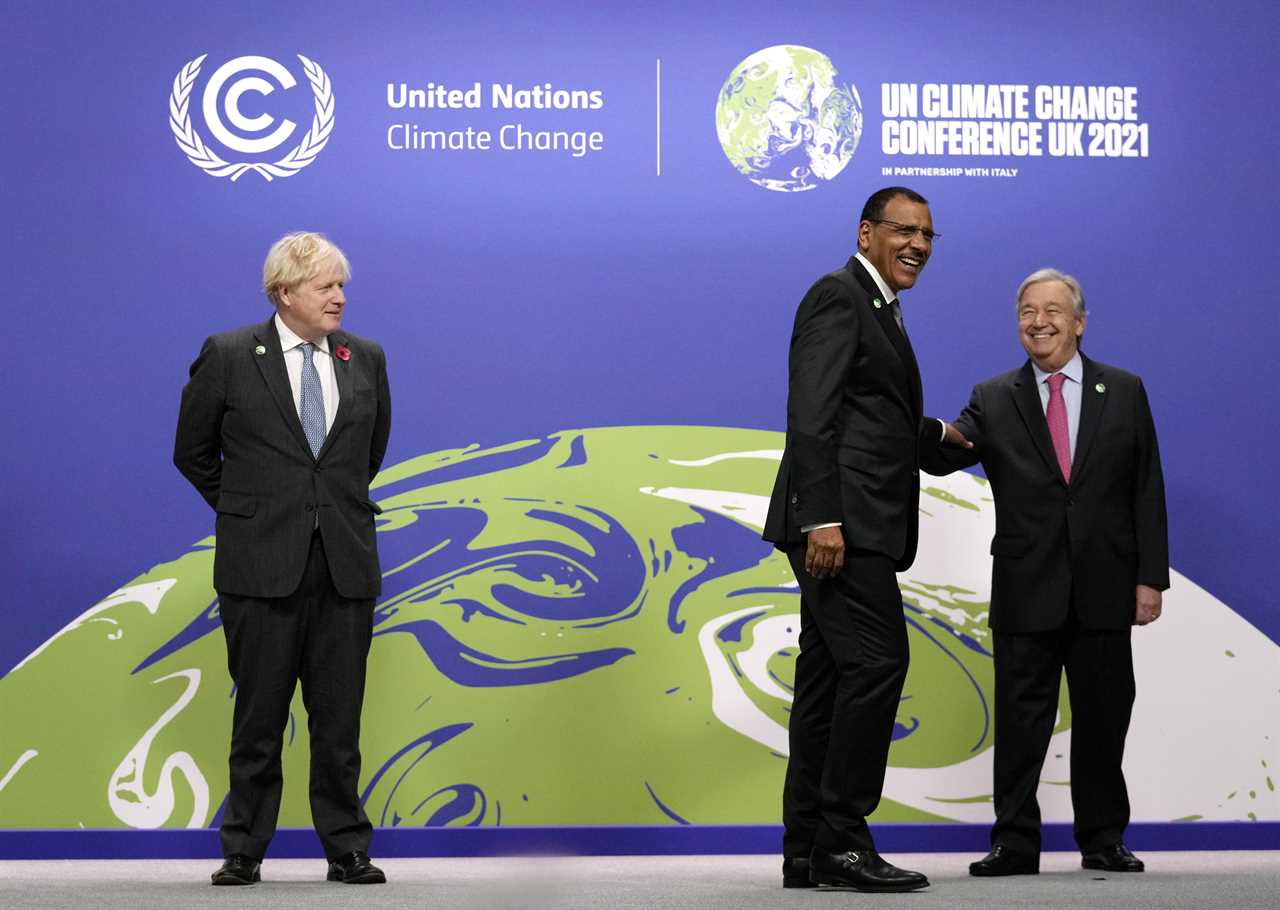