What a difference a war makes.Just a few months ago, Yandex stood out as a rare Russian business success story, having mushroomed from a small.. 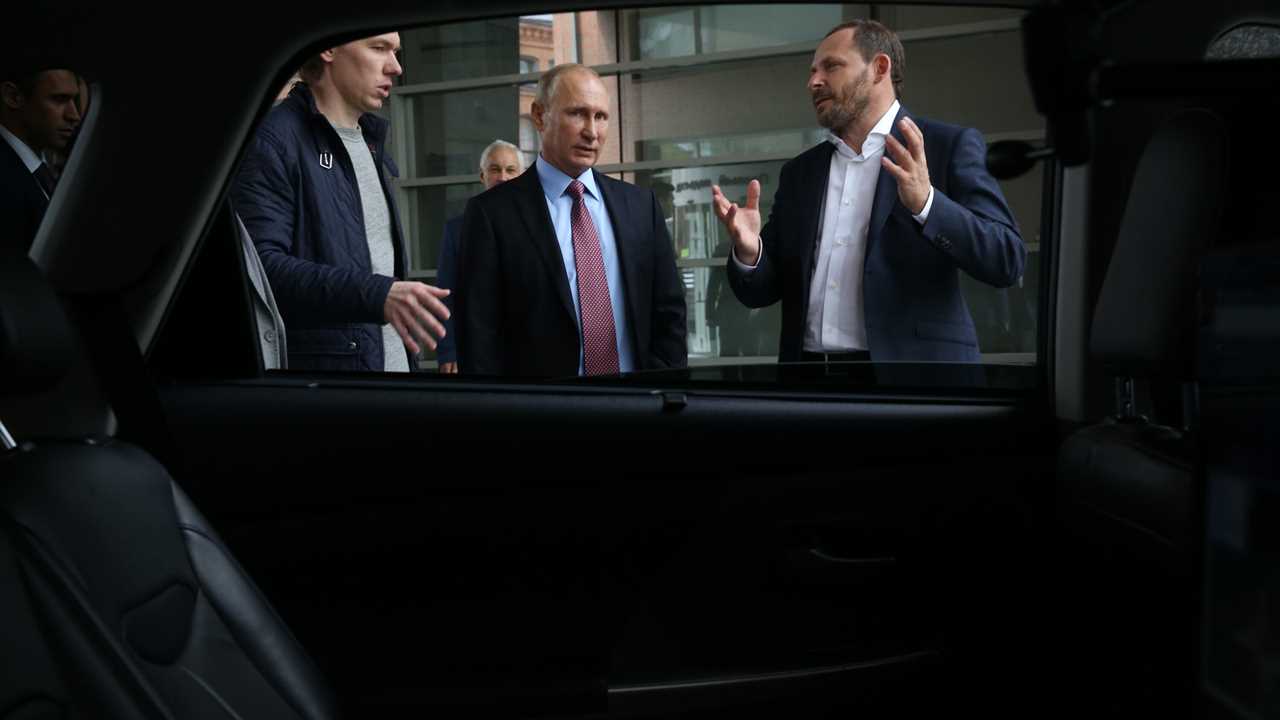 What a difference a war makes.

Just a few months ago, Yandex stood out as a rare Russian business success story, having mushroomed from a small start-up into a tech colossus that not only dominated search and ride-hailing across Russia, but boasted a growing global reach.

A Yandex app could hail a taxi in far-flung cities like Abidjan, Ivory Coast; Oslo, Norway; or Tashkent, Uzbekistan; and the company delivered groceries in London, Paris and Tel Aviv. Fifty experimental Yandex robots trundled across the campus of Ohio State University in Columbus, bringing Grubhub food orders to students — with plans to expand to some 250 American campuses.

Often called “the coolest company in Russia,” Yandex employed more than 18,000 people; its founders were billionaires; and at its peak last November, it was worth more than $31 billion. Then President Vladimir V. Putin of Russia invaded Ukraine.

The sudden distaste for most things Russian prompted the company to shutter various international businesses, including the delivery services in London, Paris and Columbus.

Thousands of employees — nearly a sixth of the total — fled the country. Its founder, Arkady Volozh, and his top deputy stepped aside after the European Union sanctioned both, accusing them of abetting Kremlin disinformation.

The company is not facing insolvency. But its sudden change of fortune serves not just as a cautionary tale for investors in an authoritarian country dependent on the whims of a single ruler. Yandex is emblematic, too, of the problems Russian companies face in a radically changed economic landscape and of the growing divisions over the war in society at large.

Established as an internet search engine even before Google, Yandex offered myriad services, including e-commerce, maps, music streaming, cloud storage and self-driving cars. Foreign investors loved it, and to Russians it was a virtual genie — a combination of Google, Uber, Amazon and Spotify all rolled into one. But the company had an Achilles heel, one that was obscured until the Ukraine invasion.

Its success as a search engine and service provider was founded, as is Google’s and that of other social media giants, on public trust. Before the war, around 50 million Russians visited its home page every day, where a list of the five top headlines was a main source of information for many.

Executives at Yandex, and its users, had come to accept the Kremlin’s curation of news sources, but considered it a limited slice of a sprawling, groundbreaking tech empire. With the invasion and the Kremlin’s crackdown on any public discussion of the war, however, Yandex quickly became the butt of jokes.

“Yandex was like an island of freedom in Russia, and I don’t know how it can continue,” said Elena Bunina, a math professor whose five-year tenure as Yandex’s chief executive ended in April, when she emigrated to Israel.

Interviews with 10 former and current employees of Yandex reveal a portrait of a company stuck between two irreconcilable imperatives. On one side, it needs to satisfy the demands of a Kremlin determined to asphyxiate any opposition to what it veils as its “special military operation” in Ukraine. On the other are Western governments, investors and partners horrified by Russia’s war, as well as the more worldly segments of its own Russian audience.

“They need to find a way between these two, and it is kind of impossible,” said Ilia Krasilshchik, who resigned from running Yandex Lavka, its speedy grocery delivery service, after facing criminal charges for posting pictures of the Bucha massacre by Russian troops. “In any other situation, it would be a perfect company, like Google, like any tech company. But Yandex has a problem since it is a Russian company.”

Founded by two math wizards in 1997, it has long claimed to generate around 60 percent of the web searches in Russia. (Google has about 35 percent, Dr. Bunina said.)

Before Yandex, Russian taxis consisted of random drivers trying to earn a few rubles. Uber tried to muscle into the market, but eventually relented and became a partner with Yandex in Russia and numerous former Soviet states. Yandex Taxi has expanded to about 20 countries.

Like many successful companies in Russia, particularly those involved in news in any format, Yandex soon caught the eye of the Kremlin. Mr. Putin’s image keepers inevitably noticed that news critical of Mr. Putin was featured frequently on Yandex.News, the company’s aggregator. During street protests in 2011 and 2012, and then the assaults on Crimea and eastern Ukraine in 2014, Kremlin officials sought to edit the list of acceptable news sources and sometimes even individual headlines.

Yandex tried to push back by explaining that an algorithm generated the list automatically from thousands of sources based on popularity.

“The pressure has been ramping up on us since 2014, and we have done everything we can to preserve a neutral role,” John W. Boynton, an American entrepreneur and the chairman of its board of directors, said in a June interview. “We do not get involved in politics, we have never wanted to.”

But Yandex was too big not to be enmeshed in politics, and the Kremlin kept chipping away at its independence. New laws forced news aggregators and search engines to use officially endorsed sources, while the government wrangled more control over the company’s management structure.

“They were just making it easier to pull the strings if they wanted to,” said Esther Dyson, one of two Americans who resigned from the board when the war started. It became clear that the Kremlin “was going further toward complete control,” she said.

After the Feb. 24 invasion, Mr. Putin quickly signed a law making it a crime to spread “fake news” about the military, subject to jail sentences of up to 15 years and hefty fines. What had been a manageable problem, fending off the Kremlin while maintaining an image of independence, suddenly became a crisis.

For users like Tonia Samsonova, a tech entrepreneur who had sold her start-up to Yandex for several million dollars but was still running it, the impact was jarring. Having read an online story from a British newspaper that the Kremlin had placed the country’s nuclear forces on high alert, she checked the headlines on Yandex.

There she found a bland story from a state-run agency about “deterrent” forces. Alarmed, she texted several Yandex executives to suggest that it present news that would rally opposition to the war; that elicited a firm “No,” she said.

Ms. Samsonova then posted her handwritten resignation letter on Instagram, accusing the company of hiding civilian deaths perpetrated by the Russian military.

“It is not accurate by design and the management knows it,” Ms. Samsonova said in an interview. “It is a crime to continue to do that when your country is invading another one.”

Aleksei A. Navalny, the imprisoned opposition leader, wrote on Twitter: “Don’t forget that the main propagandist of the war is not TV at all, but the Russian IT giant Yandex.”

In its first sanctions against one top executive, the E.U. cited online accusations of disinformation made by a former head of Yandex.News.

The company responded to the accusations that it spread disinformation by saying that Russian law tied its hands, and that it wanted to preserve the livelihoods of its employees and the interests of its investors.

Keenly aware that the government had wrested control over another social media giant, VKontakte, the equivalent of Facebook, Yandex executives tread carefully, worried about a similar nationalization.

Facing internal questions, Dr. Bunina said that, during a weekly company forum soon after the war started, she told employees that putting independent news onto the home page would last about 10 minutes, bring no change and potentially bring an end to Yandex as they knew it.

Executives figured that as long as they controlled the Yandex search engine, users could find credible news on the war from abroad, she said, noting that Russia was not yet China.

But that proved to be far too optimistic. The company soon announced that it would spin off Yandex.News and Yandex.Zen, a kind of blogging platform that had attracted government wrath as a main vehicle for spreading videos that Mr. Navalny regularly produced exposing Kremlin corruption.

For now, Yandex executives say their main concern is to continue to innovate while the heart of the company remains in Russia, cut off from most Western technology.

“Since the war, we have put all our initiatives to take our services global on hold,” said Mr. Boynton.

Some 2,500 employees who left Russia remain outside, Dr. Bunina said, and the pace of departures from the company is accelerating.

Yandex is further bedeviled by a growing split between the employees who stayed in Russia and those outside, which makes even conversation difficult, much less collaboration. Those inside anxiously refuse to discuss the war or the world, sticking to IT, while those who left in disgust often want nothing more to do with their native land.

“Whether you leave, or whether you stay, these are such different worlds right now, so you will not understand each other,” Mr. Krasilshchik said. “This is not only about Yandex, Yandex is like the country in miniature.”