CALL of Duty Vanguard key artwork has leaked online but Activision is scrambling to wipe it from the internet.The leaked images for Call of Duty 2021 ..

CALL of Duty Vanguard key artwork has leaked online but Activision is scrambling to wipe it from the internet.

The leaked images for Call of Duty 2021 appear to confirm the WWII theme that’s been rumoured for a while now. 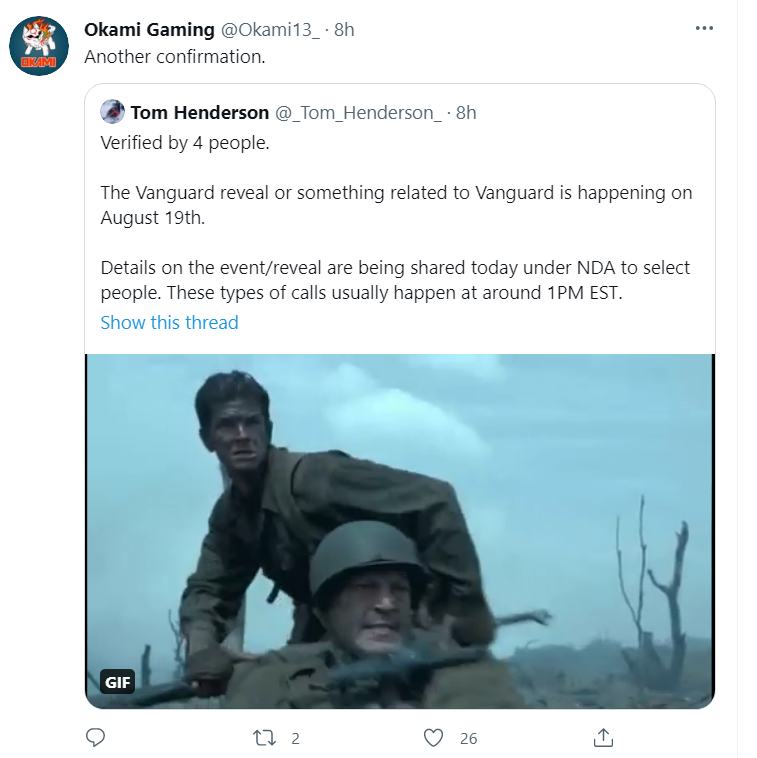 Activision has kept the details of the title under wraps so far, but is reportedly going to hold a Call of Duty Vanguard reveal event next week on Thursday, August 19.

A number of prominent CoD leakers have pegged the date as one to watch, including reputed Battlefield and Call of Duty tipster Tom Henderson.

In a now deleted tweet which was screen-grabbed by MP1st, Henderson teased a “Vanguard reveal or something related to Vanguard” set for next week.

He subsequently removed his tweets relating to the leaks at the request of Activision.

The publisher has been reaching out to people who have shared the leaked images to scrub them from the internet.

However, if you’re curious and you act fast enough, you can head to this Reddit thread to get a peek.

The OP has been posting links to imgur albums containing the leaked Call of Duty Vanguard key artwork.

This Reddit thread shares a handful of images that – if legitimate – confirm the name and setting of the title, as well as artwork for an Ultimate Edition.

One of the images has even more beans to spill, showing off three operators and weapon skins which will be apparently available in the open beta.

We haven’t inserted the images here, to avoid Activision’s wrath, but you can check out Lucas, Polina, and Wade, as well as the Breacher assault rifle, Snowstorm marksman rifle, and Thunderhead submachine gun skins.

In the meantime, if you’re waiting for more news on the Warzone Season 5 delay, Activision has confirmed that it’ll be going live a day late.

If you’re staying up to play and foresee late night gaming in your immediate future, check out the Xbox Series X’s secret night mode to give your eyes a break.

Xbox players can also save up to 75% off triple A titles in the huge Xbox game sale – do don’t miss out!