The value of MicroStrategy’s massive Bitcoin (BTC) holdings has surpassed what most S&P 500 companies hold in their cash treasuries.The Nasdaq-listed .. 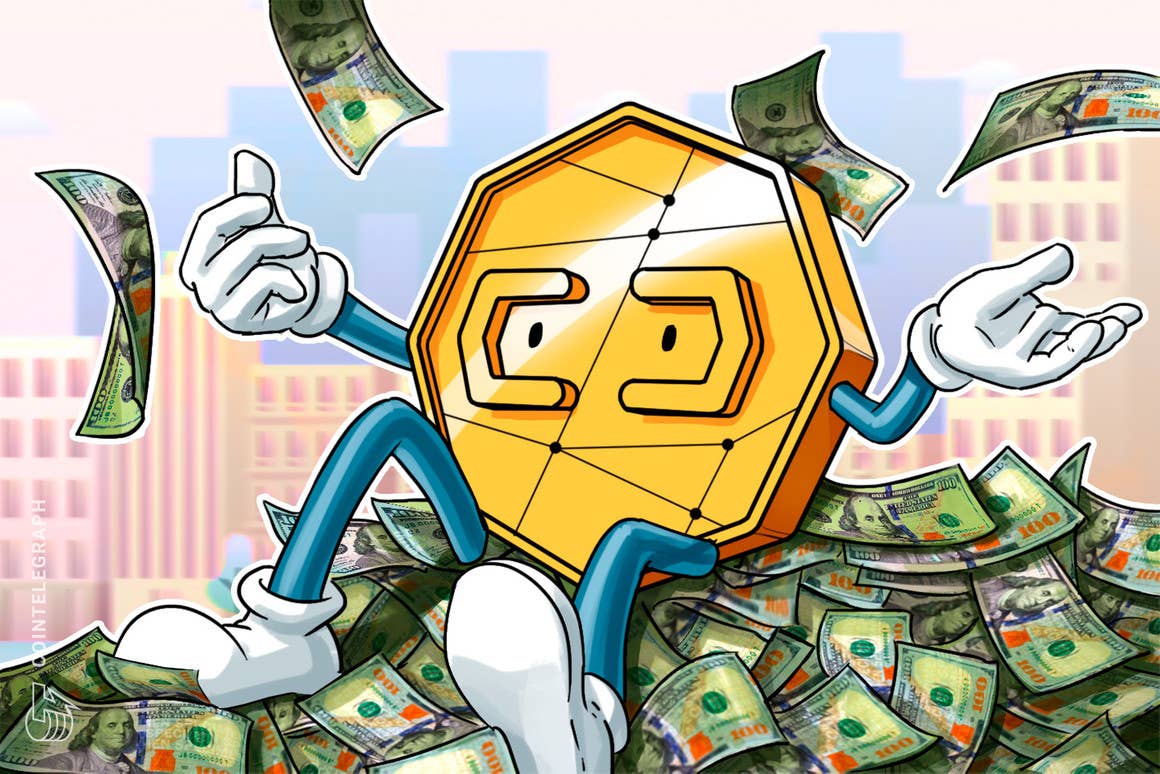 The value of MicroStrategy’s massive Bitcoin (BTC) holdings has surpassed what most S&P 500 companies hold in their cash treasuries.

The Nasdaq-listed enterprise software firm purchased an additional 5,050 Bitcoin for about $242.9 million, raising the value of its 114,042 BTC holdings to nearly $5.3 billion. That comes out to be higher than what 80% of non-financial S&P 500 companies hold in their cash coffers, as per data compiled by Bloomberg.

Cash spending up among corporations

MicroStrategy made buying Bitcoin its official corporate strategy in 2020, with its celebrated CEO, Michael Saylor, calling the move a defense against the U.S. dollar’s potential devaluation. Companies like Tesla and Square later copied the strategy to replace a portion of cash reserves with Bitcoin.

On the other hand, firms with lower risk appetites continued to increase their cash holdings. For instance, in the second quarter, non-financial companies on the S&P 500 boosted their treasuries by 12% from a year ago due to escalating uncertainty caused by the COVID-19 pandemic. 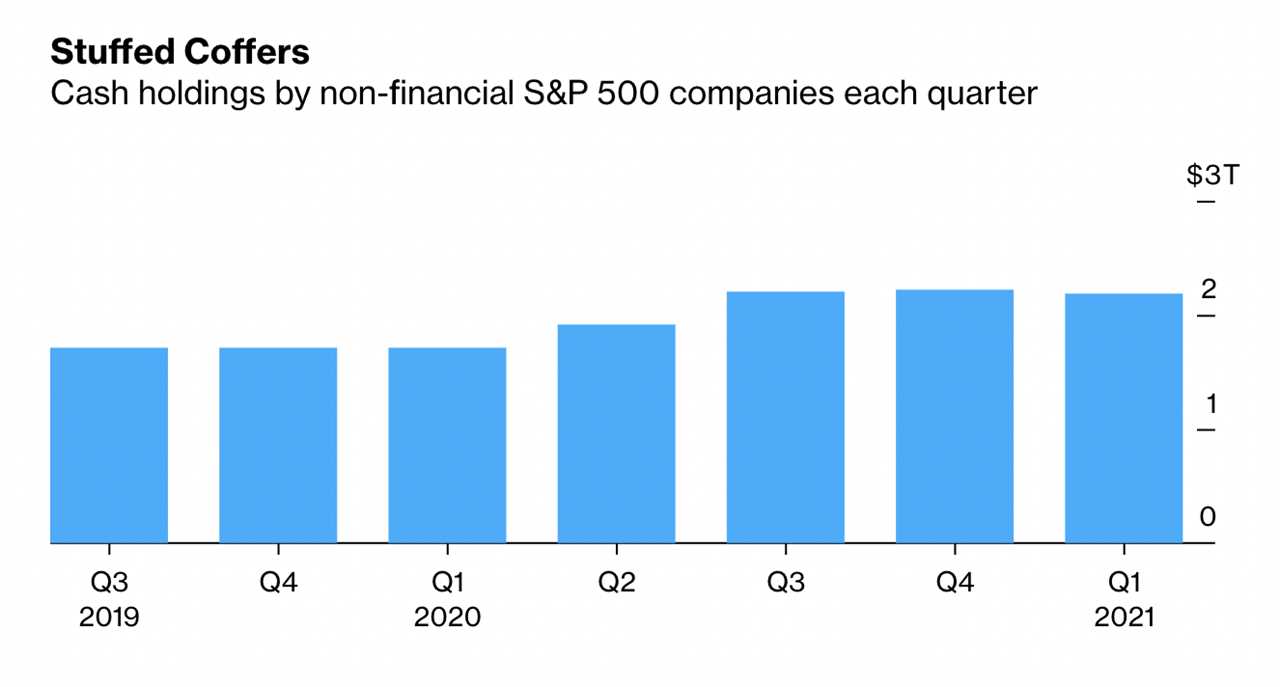 Some of those firms — including General Electric, Ford and Boeing — started spending the cash during the ongoing third quarter. For instance, in July, non-financial S&P 500 companies slashed their dollar reserves by $30 billion, or 2%, from a year ago.

At the same time, companies like Amazon and Alphabet (Google’s parent company) were still amassing cash but did little to change overall dollar spending. The total cash stockpiles held by United States corporations fell to $1.52 trillion from $1.55 trillion as they acquired new businesses, bought back shares and increased dividends, Bloomberg data reveals.

Overall, the declining cash holding trend shows that publicly traded companies have become more comfortable with spending their money, led by expectations that the COVID-19 pandemic is almost over.

Shares of MicroStrategy have surged by almost 359% in the past 12 months, in lockstep with Bitcoin, whose value has surged by 314% in the same period. 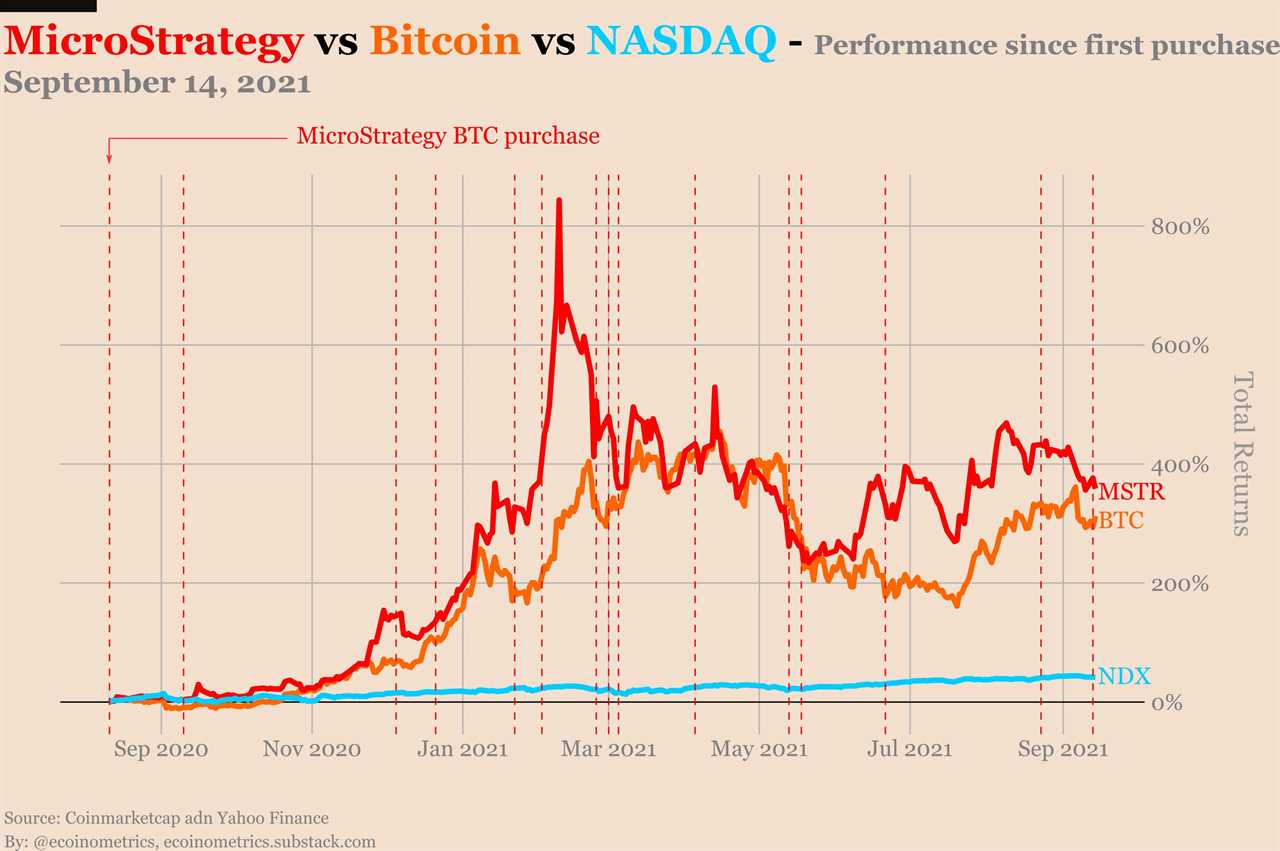 “It’s no secret that MSTR is being valued above the NAV [net asset value] of coins currently owned, and I don’t think investors are buying it for the legacy business upside,” said analyst Kingdom Capital.

“The [clearest] reason I can see is it is one of the few companies with a large market capitalization in the BTC space.”

For instance, the Amplify Transformational Data Sharing ETF, which manages $1.2 billion worth of investments, has gained 6.5% exposure in MSTR after snubbing Grayscale Bitcoin Trust, the leading Bitcoin investment vehicle in the U.S. that trades over-the-counter, which restricts it from receiving capital from certain funds and exchange-traded funds.

Similarly, the Siren Nasdaq NexGen Economy ETF has exposure to MSTR but holds no GBTC.

As a result, MicroStrategy stock and Bitcoin prices are expected to trend in sync, unless more crypto stocks become available. Kingdom Capital weighed in:

“There appear to be better vehicles available to investors for BTC equities, and as they become more widely accessible I expect some ETFs will reduce their MSTR exposure.”

Every investment and trading move involves risk, and you should conduct your own research when making a decision.