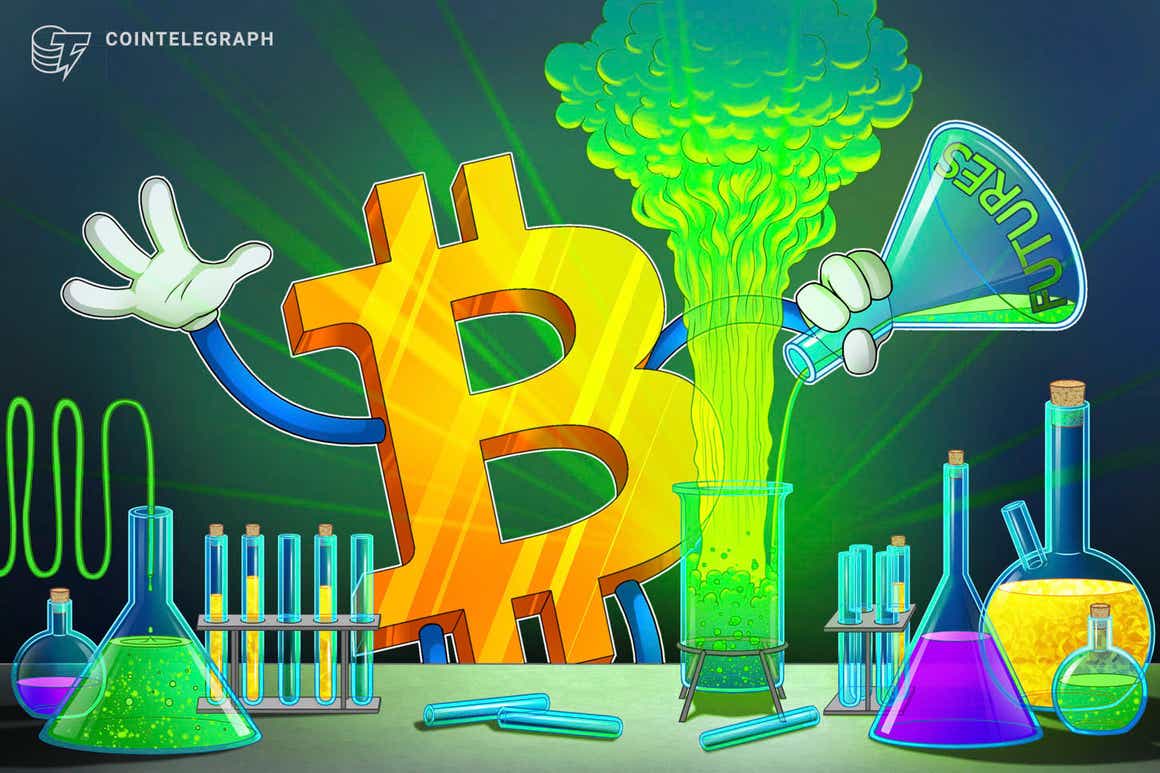 Open interest (OI) for Bitcoin (BTC) Futures trading on the Chicago Mercantile Exchange (CME) inched toward a new record high Thursday as BTC reclaimed its five-month high of $58,550 on BitStamp.

The total number of outstanding derivatives contracts on CME Group's Bitcoin Futures market reached $3.22 billion, according to data provided by ByBt.com, just $40 million below its record high logged in Feb 2021. Nonetheless, the OI came out to be higher than it was at the Bitcoin price's peak in mid-April.

Traders often use OI as an indicator to confirm trends in both derivatives and spot markets. For example, a rising number of outstanding derivatives contracts gets interpreted as new money coming into the market, irrespective of the bias.

Meanwhile, in the case of Bitcoin, a rising open interest in the futures market appears indicative of accredited investors' wanting to increase exposure to BTC.

The latest OI readings suggest that more institutional capital is entering the Bitcoin market. As a result, investors have been looking more confident in opening new positions in the $50,000-$58,000 price range, with the CME volumes trending higher in the past seven days.

Analysts see a uniform rise across OI, volume, and price as signs of new buying in the futures market. That also puts the underlying asset in a better position to continue its uptrend. So it seems, Bitcoin is undergoing a similar upside trend.

Prime evidence for a bullish Bitcoin comes from the Commodity Futures Trading Commission's record released on Oct. 5. It notes that the commercial sector — which comprises corporate hedgers — have accelerated their Bitcoin Futures purchases; they now hold a net position of more than 10,000 BTC. 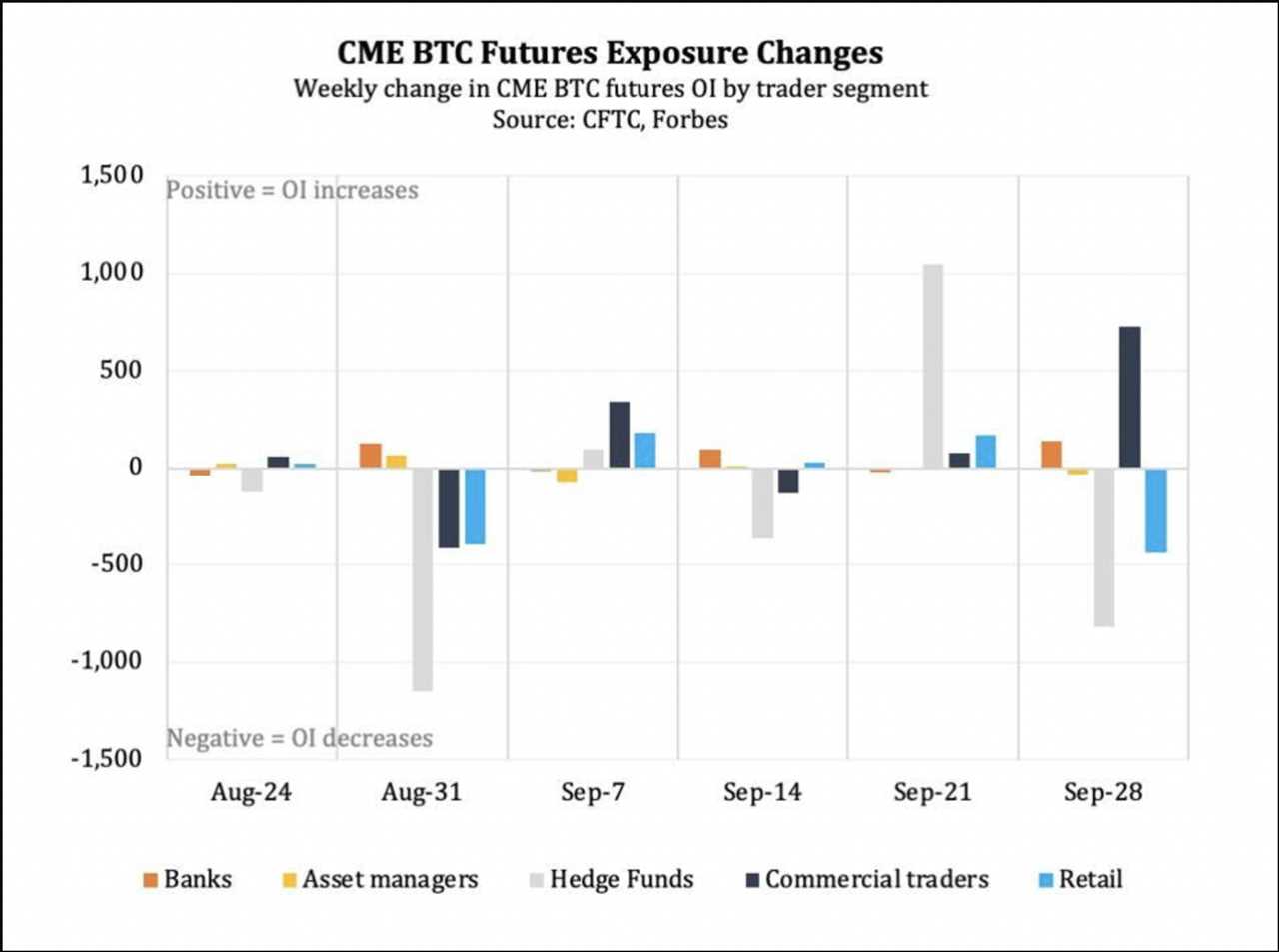 At the same time, however, hedge funds and retail investors have emerged to be net short in the Bitcoin Futures market. Nevertheless, that could be their tactic to offset long positions elsewhere, such as in the spot market.

That is primarily due to a higher annualized premium available on CME Bitcoin Futures prices over spot markets. In recent days, CME Bitcoin futures price has been regularly trading 15% above BTC spot price, compared with around 7.7% on average in the first nine months of 2021. 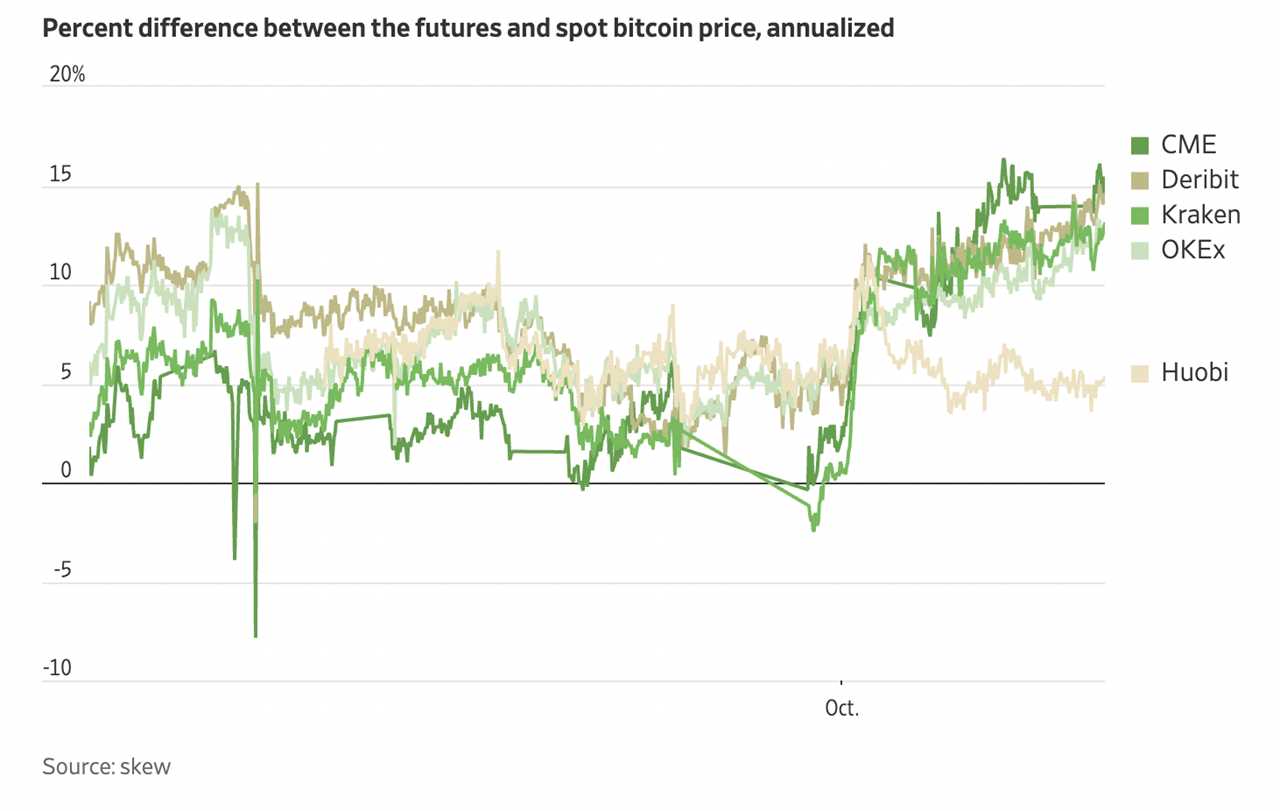 The latest bout of buying in the Bitcoin spot market also appeared in the wake of statements coming from U.S. regulators.

For instance, Gary Gensler, the chairman of the Securities and Exchange Commission (SEC), and Jerome Powell, the chairman of the Federal Reserve, discouraged a ban on Bitcoin. Meanwhile, the increasing prospect of a Bitcoin ETF approval by the SEC has also fueled the "buy the rumor" narrative.

Investors also sought exposure in the Bitcoin market as consumer prices continued to soar in the U.S. According to the Labor Department, the Consumer Price Index (CPI) rose to 5.4% year-over-year in September for the first time in thirteen years.

Bitcoin just crossed over $58,000 which is the highest price since May of this year.

Bitcoin continues to serve as the best inflation hedge in the world.

JP Morgan Chase noted in its recent report that higher inflation prompted institutional investors to seek exposure in Bitcoin, with some even seeing the cryptocurrency as a better haven asset than gold. In another report published in Jan 2021, the U.S. banking giant had anticipated the BTC price to reach $140,000 in the long term.

"A crowding out of gold as an ‘alternative’ currency implies big upside for Bitcoin over the long term," it had noted.

"A convergence in volatilities between Bitcoin and gold is unlikely to happen quickly and is in our mind a multiyear process. This implies that the above-$146,000 theoretical Bitcoin price target should be considered as a long-term target, and thus an unsustainable price target for this year.”