Pence rallies alongside Kemp on eve of Georgia’s G.O.P. primary for governor. 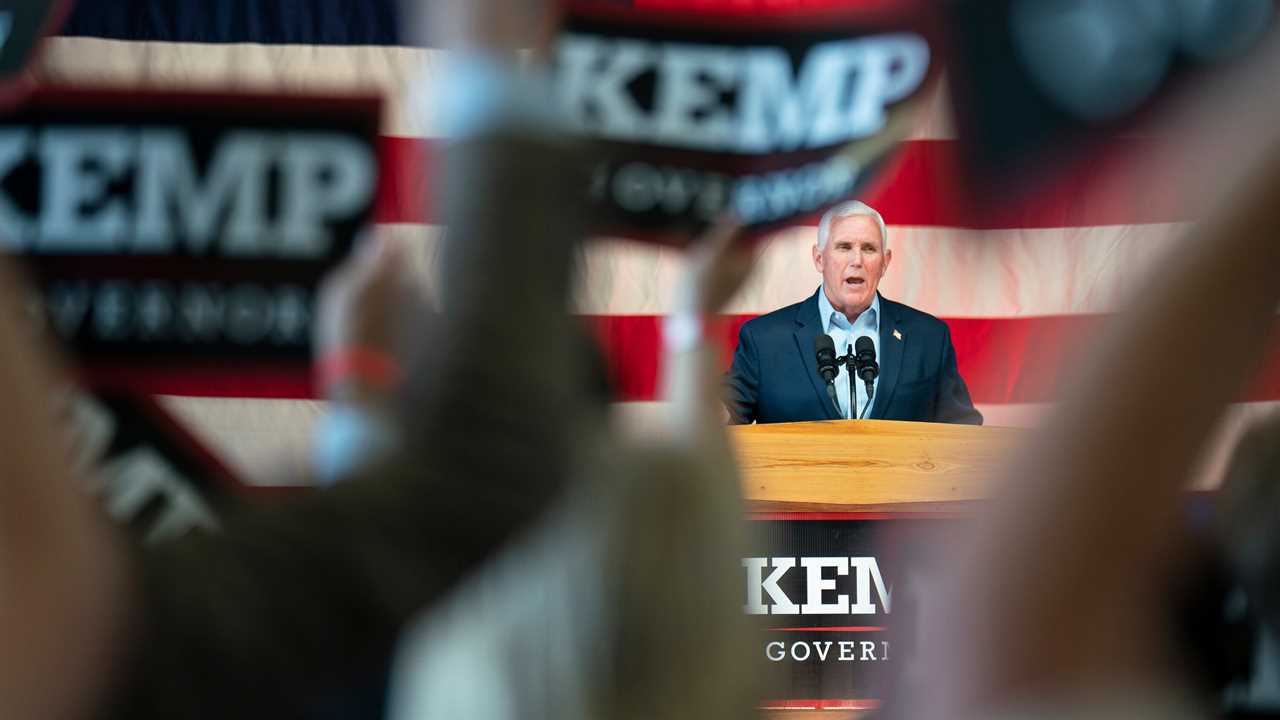 KENNESAW, Ga. — Former Vice President Mike Pence brought a closing message to Gov. Brian Kemp’s campaign for the Republican nomination for governor on Monday, headlining a rally for Mr. Kemp that was just as much about Tuesday’s primary as it was about his November matchup against Stacey Abrams, the Democratic nominee for governor.

Mr. Pence praised both Mr. Kemp’s record and his own, saying there was “no greater champion of the conservative agenda” advanced during the Trump administration than Mr. Kemp. He called out the hyper-conservative legislation passed in Georgia’s Statehouse this year and drew a stark contrast between Mr. Kemp and Ms. Abrams.

“Elections are about choices. Tomorrow’s primary election comes down to this: Who is best positioned to defeat Stacey Abrams,” Mr. Pence said to the crowd. “You know the answer.”

Both Mr. Kemp and Mr. Pence peppered their speeches with repeated jabs at Ms. Abrams, including her most recent remarks that Georgia was “the worst place in the country to live.” Mr. Pence did not mention Mr. Trump in his speech, though he did make an oblique reference to candidates who don’t concede, highlighting Mr. Kemp’s victory against Stacey Abrams in 2018. Mr. Kemp, he said, “has already defeated Stacey Abrams — whether she knows it or not.”

Mr. Pence’s visit was the last major event for Mr. Kemp’s campaign before voters head to the polls on Tuesday. Mr. Kemp is one of a handful of officials who split from Mr. Trump after the 2020 election, disavowing his false claim that the election was stolen. A few high-profile detractors visited the state on Mr. Kemp’s behalf in the final weeks of the campaign, including Chris Christie, the former New Jersey governor; Gov. Doug Ducey of Arizona; and Gov. Pete Ricketts of Nebraska.

Former Senator David Perdue, whom Mr. Trump recruited to challenge Mr. Kemp, has trailed Mr. Kemp by more than 30 points in recent polls. He lagged Mr. Kemp in fund-raising and did not build as much support among Republican state and national leaders.

Mr. Perdue ended his Trump-inspired campaign for governor of Georgia with a racist appeal to Republican primary voters on Monday, accusing Ms. Abrams of “demeaning her own race” in how she has described the state’s problems.

National politics animated the Kemp rally. Mr. Pence criticized President Biden’s administration over high gasoline prices and the baby formula shortage and he condemned a “tidal wave of left-wing policies” that have “stifled the American economy.” He also celebrated “what may well be a new era in American politics,” pointing to the five conservative Supreme Court justices who, according to a leaked draft opinion, may soon vote to overturn the Roe v. Wade decision that legalized abortion across the United States.

Mr. Pence said Tuesday’s primaries would be “a strong vote of confirmation.”

“It doesn’t have to be like this,” Mr. Pence said of Democratic policies. “Georgia has an opportunity to set the course for America back to freedom and opportunity for life.”

After the speeches, Mr. Kemp and Mr. Pence worked a rope line for photos. Mr. Pence studiously ignored reporters shouting, “Did Trump get it wrong in Georgia?”

Voters in attendance said they admired Mr. Kemp’s policies on education, public health and aid to small businesses during the pandemic. Many had already cast their ballot for Mr. Kemp and some supported him in 2018.

“He’s a great leader,” said Tom Bradbury, 77, a homebuilder in Kennesaw. He said he was especially proud of Mr. Kemp’s record on the economy.

“Wouldn’t you like to get a paycheck?” he said.

Joe Sanchez, a retired firefighter who lives in Kennesaw, complimented Mr. Kemp’s economic record and said he appreciated the state’s budget surplus. Mr. Pence’s visit, he said, was “icing on the cake.”