WASHINGTON — Justice Department officials have reviewed potential sedition charges against members of the Oath Keepers militia group who attacked the .. 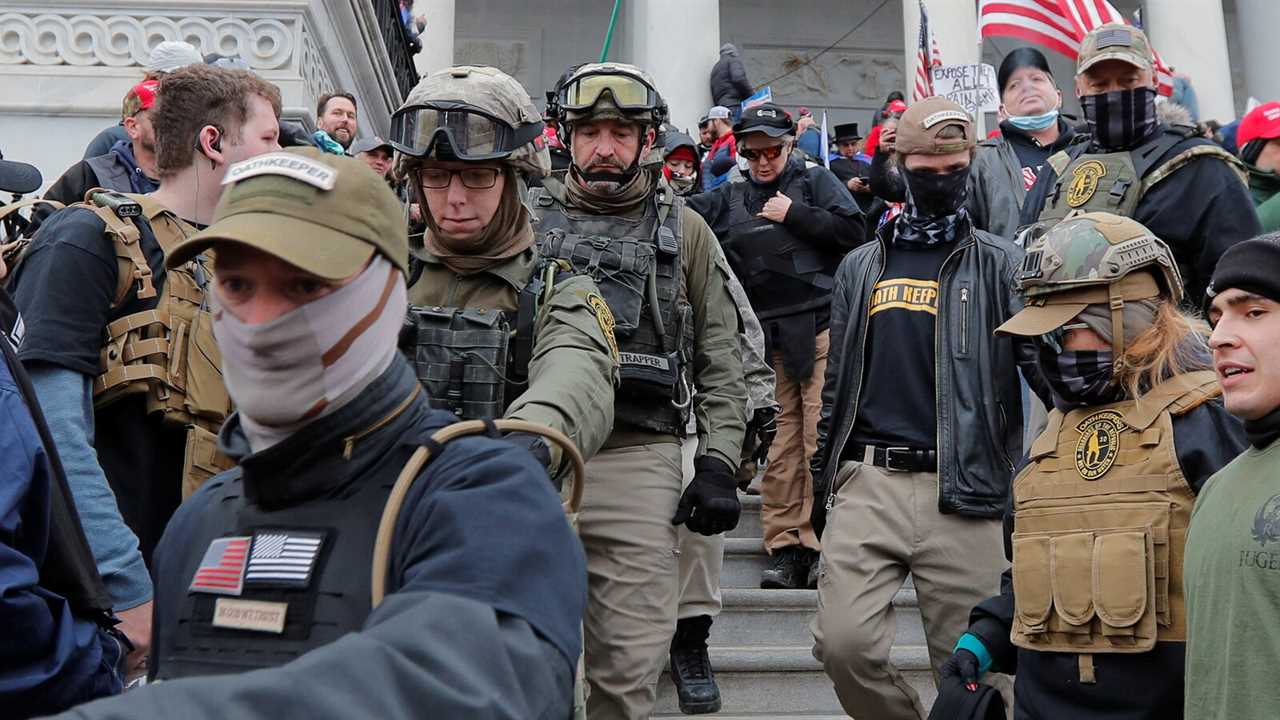 WASHINGTON — Justice Department officials have reviewed potential sedition charges against members of the Oath Keepers militia group who attacked the Capitol on Jan. 6, and they have been weighing whether to file them for weeks, according to law enforcement officials briefed on the deliberations.

The Justice Department has rarely brought charges of sedition, the crime of conspiring to overthrow the government, and has not successfully prosecuted such a case in more than 20 years.

The decision about how to move forward has languished while Justice Department leaders go through the Senate confirmation process. Attorney General Merrick B. Garland was sworn in on March 11 and is likely to have final say over such a high-profile case.

Law enforcement officials have given senior officials in the Justice Department’s National Security Division potential evidence that they had gathered about the trio and an analysis of whether those facts supported a sedition charge, but they stopped short of delivering a more formal prosecution memo or a draft of an indictment, one of the officials said.

Early on in the sprawling investigation into the assault on the Capitol, investigators began focusing on members of the Oath Keepers, a militia that was founded by former law enforcement officers and military veterans, as well as members of the far-right nationalist group the Proud Boys.

While most of the 400 or so people charged by federal prosecutors have been accused of illegally entering the Capitol and assaulting police officers, about two dozen also face charges of conspiring to come to Washington to try to overturn the election results, including members of the Oath Keepers.

Lawyers for Mr. Caldwell, Ms. Watkins and Mr. Crowl have vigorously denied in court papers that their clients plotted to attack the Capitol, and they have argued that prosecutors misinterpreted communications or exaggerated the strength of the evidence against them. Their lawyers did not immediately respond to requests for comment on Monday.

This week, a federal judge is scheduled to determine whether the trio will remain in jail awaiting trial.

The potential for sedition charges received renewed attention this week after Michael R. Sherwin, the outgoing leader of the investigation, said on “60 Minutes” that the government had most likely obtained enough evidence to bring a sedition charge.

“I personally believe the evidence is trending toward that, and probably meets those elements,” Mr. Sherwin said. “I believe the facts do support those charges. And I think that, as we go forward, more facts will support that.”

The comments echoed his assertions in the days after the assault, when Mr. Sherwin said that the Justice Department had formed a strike force of senior national security and public corruption prosecutors to look at more serious charges, including sedition.

“Their only marching orders from me are to build seditious and conspiracy charges related to the most heinous acts that occurred in the Capitol,” Mr. Sherwin, then the acting U.S. attorney in Washington, said at a news conference on Jan. 12. He noted that some of those charges carried prison terms of up to 20 years.

Mr. Sherwin recorded the interview days before he handed leadership of the inquiry over to Channing D. Phillips, the acting U.S. attorney in Washington. While Mr. Sherwin is no longer working on the investigation, he is still a Justice Department employee and federal prosecutor in Miami.

In January, prosecutors charged Mr. Caldwell, Mr. Crowl and Ms. Watkins with conspiring to commit federal crimes, revealing the first evidence of planning among a known militia group ahead of the riot, and investigators continued to uncover communications between the suspects that revealed new information about their planned travel to Washington.

Prosecutors added more people and charges to the case against the Oath Keepers, securing an indictment in February on charges of conspiring to derail the vote certification. In March, another indictment brought the total number of people suspected in the conspiracy to 10.

While building more significant cases against the Oath Keepers, investigators also began to regard the members as potential targets in a sedition case, according to two people with knowledge of the case.

In court documents, federal prosecutors said that the group of Oath Keepers not only planned to interfere in the final election certification, but that they “trained in paramilitary combat tactics in advance of the Jan. 6 operation” and were seen “forcibly storming” the barricades at the Capitol.

They have also emphasized in court papers that members of the group discussed stationing help at a hotel just outside of the city, ready to bring arms into Washington “if something goes to hell,” citing a message sent by Mr. Caldwell to Ms. Watkins.