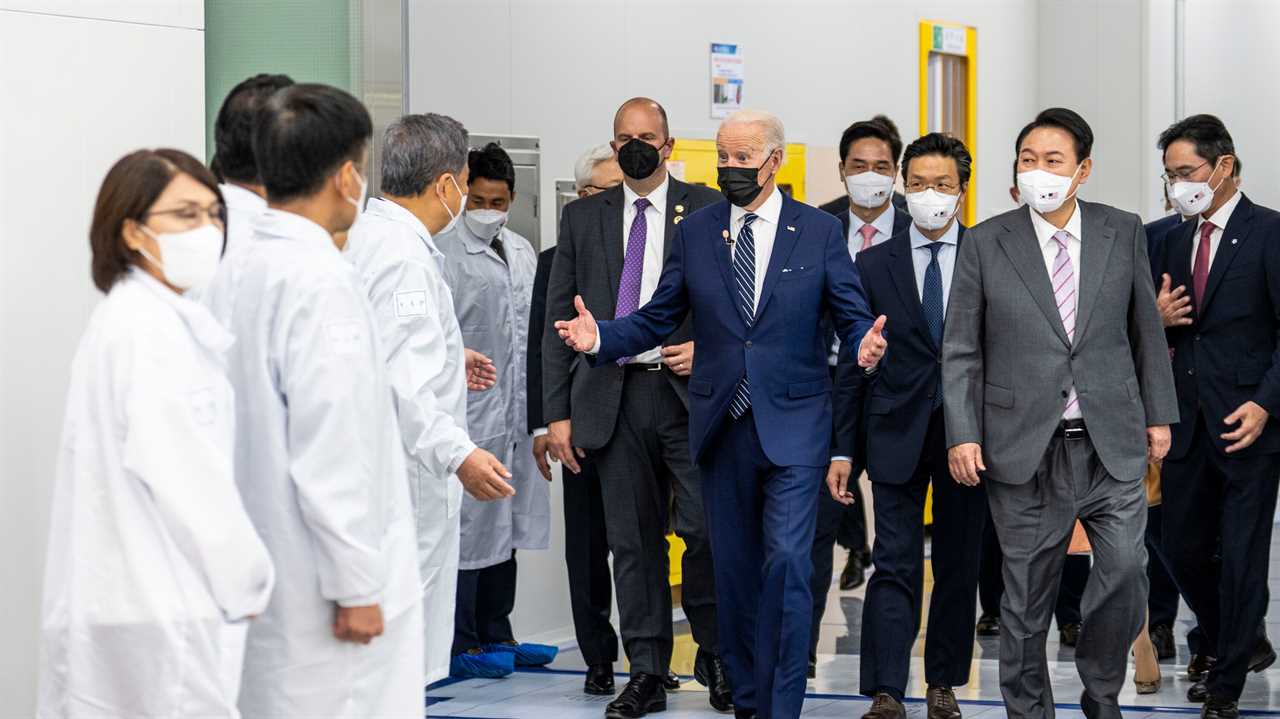 PYEONGTAEK, South Korea — President Biden began his first diplomatic mission in Asia on Friday by touring a Samsung semiconductor facility in South Korea, part of his effort to strengthen the waning economic influence of the United States in the region and to address supply chain problems that have hurt American consumers back home.

Shortly after landing at Osan Air Base, Mr. Biden joined President Yoon Suk-yeol of South Korea at the Samsung plant, praising it as a model for the type of manufacturing that the United States desperately needs to head off soaring inflation and to compete with China’s growing economic dominance.

“This is an auspicious start to my visit, because it’s emblematic of the future cooperation and innovation that our nations can and must build together,” Mr. Biden said, adding that Samsung will invest $17 billion to build a similar plant in Taylor, Texas.

The decision to begin a five-day trip in Asia with a visit to a semiconductor facility underscored the complexity of a tour meant to strengthen security ties, forge new economic pacts and reassure allies of America’s commitment in the Indo-Pacific after months of prioritizing the war in Ukraine and years of ceding influence to Beijing.

While competing more aggressively with China has been a central goal of Mr. Biden’s foreign policy, the administration also views its allies in the Indo-Pacific as key partners as it tries to unsnarl the supply chain and reboot American manufacturing.

“Our two nations work together to make the best, most advanced technology in the world,” Mr. Biden said at the plant, surrounded by monitors showing Samsung employees listening to his remarks. “And this factory is proof of that, and that gives both the Republic of Korea and the United States a competitive edge in the global economy if we can keep our supply chains resilient, reliable and secure.”

But countries in the region have been wary of economic assurances from Washington since the Trump administration withdrew from the Trans-Pacific Partnership, an American-negotiated trade pact meant to counter Beijing.

When Mr. Biden travels to Japan for the second leg of his trip over the weekend, he is expected to unveil the new Indo-Pacific Economic Framework, outlining priorities such as digital trade and supply chain resilience among allies. But it was unclear how many nations would sign on for a new economic strategy that falls well short of a formal trade agreement.

Even Rahm Emanuel, the U.S. ambassador to Japan, said on Thursday that governments in the region are still asking, “What is it we are signing up for?”

Scott A. Snyder, the director of U.S.-Korea policy at the Council on Foreign Relations, said Mr. Biden’s proposal is essentially “a new packaging of existing Biden administration priorities in this economic policy area.”

“And whether or not it really takes off depends on whether partners believe that there’s enough there there to justify being engaged,” he said.

Mr. Snyder added that he thought South Korea was taking seriously the Biden administration’s commitment to invest in the region. “I think they’re believing,” he said. “And we’ll see whether they’re whistling past the graveyard.”

During the visit to the plant, Mr. Biden made clear that his focus was not only on growing America’s influence abroad, but also on addressing domestic policy challenges in the United States. While demand for products containing semiconductors increased by 17 percent from 2019 to 2021, there has not been a comparable increase in supply, partly because of pandemic-related disruptions.

As a result, prices for automobiles have skyrocketed, and the need for more chips is likely to increase as 5G technology and electric vehicles become more widespread.

The United States already faces an “alarming” shortage of the semiconductors, Gina Raimondo, Mr. Biden’s commerce secretary, warned this year, adding that the crisis had contributed to the highest level of inflation in roughly 40 years.

The Samsung stop was just one effort to encourage Asian allies to invest in the United States. On Sunday, Mr. Biden will join the chairman of Hyundai to celebrate the South Korean company’s decision to invest in a new electric vehicle and battery manufacturing facility in Savannah, Ga.

With questions hanging over his administration’s economic strategy in Asia and a manufacturing bill stuck in Congress, Mr. Biden is hoping to find a helpful partner in South Korea, said Daniel Russel, a vice president at the Asia Society who was assistant secretary of state for Asia in the Obama administration.

“I think that the relationship, which is already quite strong, can flourish,” Mr. Russel said. “There’s a strong convergence of views between the Biden team and the Yoon team on security policy, including concerns about China, the need for global cooperation and working together on semiconductors and trade.”

How the Supply Chain Crisis Unfolded

The pandemic sparked the problem. The highly intricate and interconnected global supply chain is in upheaval. Much of the crisis can be traced to the outbreak of Covid-19, which triggered an economic slowdown, mass layoffs and a halt to production. Here’s what happened next:

A reduction in shipping. With fewer goods being made and fewer people with paychecks to spend at the start of the pandemic, manufacturers and shipping companies assumed that demand would drop sharply. But that proved to be a mistake, as demand for some items would surge.

Demand for protective gear spiked. In early 2020, the entire planet suddenly needed surgical masks and gowns. Most of these goods were made in China. As Chinese factories ramped up production, cargo vessels began delivering gear around the globe.

Then, a shipping container shortage. Shipping containers piled up in many parts of the world after they were emptied. The result was a shortage of containers in the one country that needed them the most: China, where factories would begin pumping out goods in record volumes.

Labor shortages. Businesses across the economy, meanwhile, struggled to hire workers, including the truck drivers needed to haul cargo to warehouses. Even as employers resorted to lifting wages, labor shortages persisted, worsening the scarcity of goods.

Component shortages. Shortages of one thing turned into shortages of others. A dearth of computer chips, for example, forced major automakers to slash production, while even delaying the manufacture of medical devices.

A lasting problem. Businesses and consumers reacted to shortages by ordering earlier and extra, especially ahead of the holidays, but that has placed more strain on the system. These issues are a key factor in rising inflation and are likely to last through 2022 — if not longer.

Mr. Yoon, a conservative politician and a former prosecutor, is one of the leaders in the region who has welcomed the Biden administration’s traditional approach to foreign policy after the chaotic years of President Donald J. Trump. Soon after Mr. Yoon was elected in March, he sent a delegation of senior advisers to Washington to build ties with the Biden administration.

Sue Mi Terry, director of the Asia program at the Wilson Center in Washington, said she expected Mr. Biden and Mr. Yoon to have natural chemistry. “While President Yoon has a stern image as a former prosecutor, he is actually folksy, middle class, and down to earth — just like the ‘ordinary Joe’ in the White House,” she said.

The Yoon administration has been coordinating with U.S. officials on sanctions against Russia and has also agreed to abide by export controls on critical technologies. Although South Korea remains a major buyer of Russian oil, it has signaled that it is trying to bring down those purchases. According to people familiar with his thinking, Mr. Yoon is also seeking to identify which supply chains can be moved out of China for greater economic security.

Mr. Biden and Mr. Yoon are scheduled for a bilateral meeting in Seoul on Saturday. Beyond China, escalating tension with North Korea is likely to be a focus. Compared with his predecessor, Moon Jae-in, Mr. Yoon has taken a harder line on the North and probably will seek to discuss missile technology and deployment with the United States during Mr. Biden’s visit.

Jake Sullivan, Mr. Biden’s national security adviser, said during the president’s flight to South Korea that Washington was prepared for a possible nuclear test or missile test from the North, which in March ended its self-imposed moratorium on intercontinental ballistic missile tests.

“There is a genuine possibility, a real risk of some kind of provocation while we’re in the region,” Mr. Sullivan said from Air Force One. “I think all it would do is underscore one of the main messages we are sending on this trip, which is the United States is here for our allies and partners.”