WE’VE been speaking to NealGuides, a pro FIFA coach who has almost as many FIFA 23 tips as he does subscribers on his YouTube channel. The content..

WE’VE been speaking to NealGuides, a pro FIFA coach who has almost as many FIFA 23 tips as he does subscribers on his YouTube channel.

The content creator has been around for years, schooling people on how to dominate the game. 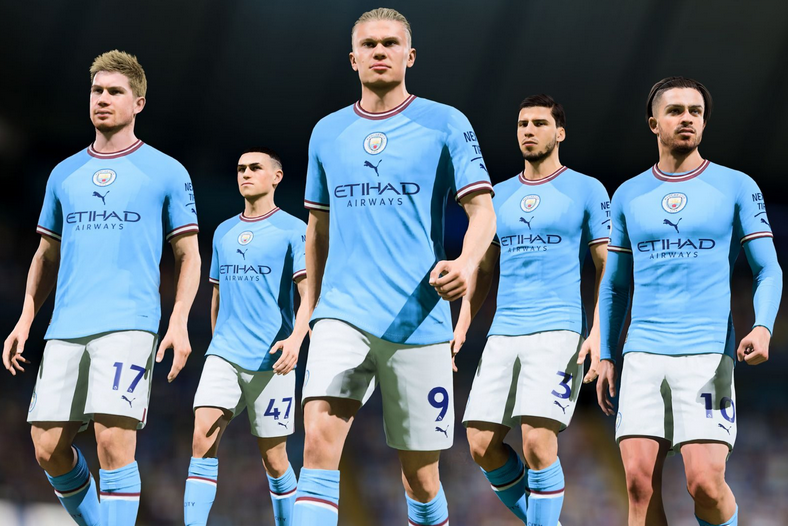 Man City step into the stadium in FIFA 23.

Now NealGuides is here to give us five attacking tips and five defending tips for FIFA 23.

FIFA 23 has new button configurations, including the way you shoot a Low Driven or Low Shot.

In this iteration, when taking a shot with your attacker, apply less than 40% power and you will shoot a high-powered Low Shot.

These types of Low Shots are perfect to use in 1v1 situations and when shooting across goal.

In possession, the best way to transition from defense to attack for a quick counterattack is to use Driven Ground Pass – hold R1 + X [PS5] or RB + A [XBOX].

These are just like regular ground passes but have vastly more power and therefore reach the attackers faster. Perfect for an explosive break!

A new skill move is the Explosive Fake Shot.

It’s simple to do by pressing Circle then X [PS5] or B then A [XBOX] and then moving your left analog stick to a 90-degree angle to exit.

The fake shot gives you an explosive speed boost to beat an opponent, especially inside the box.

The only downside is that the player doing this skill move needs to have the Acceleration & Sprint Speed stats above 85 and 4-star Skill Moves, so only certain players like Mbappé can perform the Explosive Fake Shot.

There is a new shooting mechanic called the Power Shot.

Your aim is manual and it can take some time to get used to, but this feature adds power and accuracy to your shot. Perfect for those outside-the-box long shots.

One common mistake among many players, even those in the Elite Division, is that they like to sprint too much while in possession of the ball.

This causes you to lose the ball due to heavy touches and causes delays in actions such as passing.

My top tip is, once in the opponent’s half, do not use the sprint button as much and take a touch away from your opponent. This will prevent you from losing the ball.

Unlike real life, the best defense in FIFA 23 is pace.

As most players choose attackers – especially if you play Ultimate Team – where their pace stats are quite high, this makes it very easy for them to break on the counterattack.

I would advise sometimes choosing a slightly lower-rated player with better pace than a defender with good defending stats but 60 pace.

When the opponent has the ball and does a through ball or a ball over the top, defender players tend to run where the ball is.

When defending in 1v1 situations, you can also move your goalkeeper.

Press and hold the right analog stick down and move it to either side to move your goalkeeper.

One step to either side normally is enough, but if you guess the shot correctly, you could save a clear goal-scoring opportunity.

An issue that players of all skill levels struggle with is player switching when defending.

There is a new Adaptive Right Stick Switching feature, which can be found in the controller settings.

When defending, hold the right analog stick in a direction for longer to switch to a player further away.

This is now my go-to setting for player switching!

Double tap and hold R1 [PS5] or RB [XBOX] to activate Partial Team Press – perfect for when you want to apply pressure and close down your opponent’s passing options.

Written by Kirk McKeand and NealGuides on behalf of GLHF.