A group of President Donald J. Trump’s allies and associates spent months trying to overturn the 2020 election based on his lie that he was the true.. 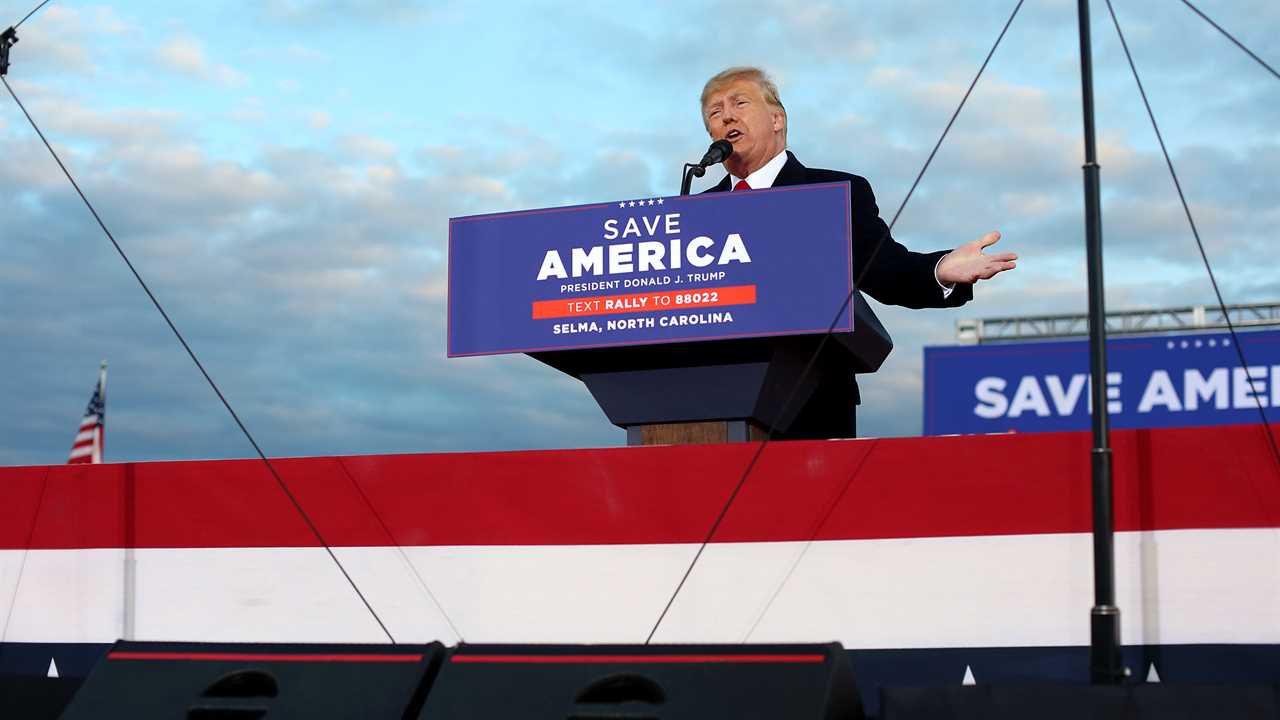 A group of President Donald J. Trump’s allies and associates spent months trying to overturn the 2020 election based on his lie that he was the true winner.

Now, some of the same confidants who tried and failed to invalidate the results based on a set of bogus legal theories are pushing an even wilder sequel: that by “decertifying” the 2020 vote in key states, the outcome can still be reversed.

In statehouses and courtrooms across the country, as well as on right-wing news outlets, allies of Mr. Trump — including the lawyer John Eastman — are pressing for states to pass resolutions rescinding Electoral College votes for President Biden and to bring lawsuits that seek to prove baseless claims of large-scale voter fraud. Some of those allies are casting their work as a precursor to reinstating the former president.

The efforts have failed to change any statewide outcomes or uncover mass election fraud. Legal experts dismiss them as preposterous, noting that there is no plausible scenario under the Constitution for returning Mr. Trump to office.

But just as Mr. Eastman’s original plan to use Congress’s final count of electoral votes on Jan. 6, 2021, to overturn the election was seen as far-fetched in the run-up to the deadly Capitol riot, the continued efforts are fueling a false narrative that has resonated with Mr. Trump’s supporters and stoked their grievances. They are keeping alive the same combustible stew of conspiracy theory and misinformation that threatens to undermine faith in democracy by nurturing the lie that the election was corrupt.

It has fed a cottage industry of podcasts and television appearances centered around not only false claims of widespread election fraud in 2020, but the notion that the results can still be altered after the fact — and Mr. Trump returned to power, an idea that he continues to push privately as he looks toward a probable re-election run in 2024.

Democrats and some Republicans have raised deep concerns about the impact of the decertification efforts. They warn of unintended consequences, including the potential to incite violence of the sort that erupted on Jan. 6, when a mob of Mr. Trump’s supporters — convinced that he could still be declared the winner of the 2020 election — stormed the Capitol. Legal experts worry that the focus on decertifying the last election could pave the way for more aggressive — and earlier — legislative intervention the next time around.

“At the moment, there is no other way to say it: This is the clearest and most present danger to our democracy,” said J. Michael Luttig, a leading conservative lawyer and former appeals court judge, for whom Mr. Eastman clerked and whom President George W. Bush considered as a nominee to be the chief justice of the United States. “Trump and his supporters in Congress and in the states are preparing now to lay the groundwork to overturn the election in 2024 were Trump, or his designee, to lose the vote for the presidency.”

The efforts have been led or loudly championed by people with ties to Mr. Trump, and those who have continued meeting with or speaking to him. They include Mike Lindell, the chief executive of MyPillow; Michael T. Flynn, Mr. Trump’s first national security adviser; Stephen K. Bannon, the former White House chief strategist; and Boris Epshteyn, an aide and associate of Mr. Trump’s.

Another key player has been Mr. Eastman, the right-wing lawyer who persuaded Mr. Trump shortly after the election that Vice President Mike Pence could reject certified electoral votes for Mr. Biden when he presided over the congressional count and declare Mr. Trump the victor instead.

Mr. Eastman wrote a memo and Mr. Epshteyn sent an email late last year to the main legislator pushing a decertification bill in Wisconsin, laying out a legal theory to justify the action. Mr. Eastman met last month with Robin Vos, the speaker of the State Assembly, and activists working across the country, a meeting that was reported earlier by The Milwaukee Journal Sentinel.

Jefferson Davis, an activist from Wisconsin, said he had asked Mr. Eastman to join the meeting after hearing about his work on behalf of Mr. Trump following the election.

“If it was good enough for the president of the United States,” Mr. Davis said in an interview, “then his expertise was good enough to meet with Speaker Vos in Wisconsin on election fraud and what do we do to fix it.”

Mr. Vos has maintained that the Legislature has no pathway to decertification, in line with the guidance of its own lawyers.

“There is no mechanism in state or federal law for the Legislature to reverse certified votes cast by the Electoral College and counted by Congress,” the lawyers wrote, adding that impeachment was the only way to remove a sitting president other than in the case of incapacity.

But Mr. Eastman has made clear that he has no intention of dropping his fight to prove that the election was stolen. The House committee investigating the Jan. 6 attack has said his legal efforts to invalidate the results most likely violated the law by trying to defraud the American people. A federal judge recently agreed, calling Mr. Eastman’s actions “a coup in search of a legal theory.”

Legal experts say his continued efforts could increase his criminal exposure; but if Mr. Eastman were ever to be charged with fraud, he could also point to his recent work as evidence that he truly believed the election was stolen.

“There are a lot of things still percolating,” Mr. Eastman said in an interview with The New York Times last fall. He claimed that states had illegally given people the ability to cast votes in ways that should have been forbidden, corrupting the results. And he pointed to a widely debunked video from State Farm Arena in Atlanta, which he claimed showed that tabulation ballots were run through counting machines multiple times during the election.

Charles Burnham, Mr. Eastman’s lawyer, said in a statement that he “was recently invited to lend his expertise to legislators and citizens in Wisconsin confronting significant evidence of election fraud and illegality. He did so in his role as a constitutional scholar and not on behalf of any client.”

The fringe legal theory that Mr. Eastman and Mr. Epshteyn are promoting — which has been widely dismissed — holds that state lawmakers have the power to choose how electors are selected, and they can change them long after the Electoral College has certified votes if they find fraud and illegality sufficiently altered the outcome. The theory has surfaced in multiple states, including several that are political battlegrounds.

As in Wisconsin, state legislators in Arizona drafted resolutions calling for the decertification of the 2020 election. In Georgia, a lawsuit sought to decertify the victories of the Democratic senators Jon Ossoff and Raphael Warnock. And Robert Regan, a Republican favored to win a seat in the Michigan House, has said he wants to decertify the 2020 election either through a ballot petition or the courts.

Debating a criminal referral. The Jan. 6 House committee has grown divided over whether to make a criminal referral of former President Donald J. Trump to the Justice Department, even though it has concluded that it has enough evidence to do so. The debate centers on whether a referral would backfire by politically tainting the expanding federal investigation.

Cooperating with investigators. Pat A. Cipollone and Patrick F. Philbi, two of Mr. Trump’s top White House lawyers, met with the Jan. 6 House committee, while Ali Alexander, a prominent organizer of pro-Trump events after the 2020 election, said he would assist in the federal investigation.

Mr. Bannon, Mr. Lindell and Mr. Epshteyn have repeatedly promoted decertification at the state level on Mr. Bannon’s podcast, “War Room,” since last summer, pushing it as a steady drumbeat and at times claiming that it could lead to Mr. Trump being put back into office. They have described the so-called audit movement that began in Arizona and spread to other states as part of a larger effort to decertify electoral votes.

“We are on a full, full freight train to decertify,” Mr. Epshteyn said on the program in January. “That’s what we’re going to get. Everyone knows. Everyone knows this election was stolen.”

Last fall, 186 state legislators from 39 states joined a letter written by Wendy Rogers, a Republican state senator from Arizona who has appeared at events hosted by Mr. Lindell, calling on “each state to decertify its electors where it has been shown the elections were certified prematurely and inaccurately.”

All the efforts have either failed to progress or been rejected for lack of legal grounds in the absence of any evidence of widespread voter fraud that could have affected the 2020 election. And even as elected Republicans have almost uniformly embraced Mr. Trump’s claims that the vote was stolen, many have rejected the idea that states should decertify their results or argued that the effort was merely symbolic, noting that he could never be reinstated.

Still, Mr. Trump is now the front-runner in public opinion surveys of the possible Republican presidential field. While he has yet to declare his candidacy, he has privately told associates that he is planning to run again.

A spokesman for Mr. Trump did not respond to an email seeking comment.

The legal drive to reverse his 2020 loss has had ripple effects in the Republican Party. With midterm congressional elections less than six months away, the push has put pressure on candidates to either endorse it or risk the wrath of Mr. Trump and his supporters. In Alabama, Representative Mo Brooks said that the former president had repeatedly demanded that he “rescind” the election and remove Mr. Biden. When the congressman said that was impossible, Mr. Trump withdrew his endorsement in the state’s Senate Republican primary.

In Pennsylvania, Jake Corman, the top Republican in the State Senate who promised last year to review the 2020 election results, said he had dropped plans to end his bid for governor after Mr. Trump urged him to “keep fighting.” He then went on Mr. Bannon’s podcast, where Mr. Corman said there was “no question” about the need to investigate whether electors needed to be decertified in battleground states, and pledged to “turn the Department of State upside down” to find evidence of illegality.

Last year, Mr. Lindell vocally championed the false claim that Mr. Biden’s victory could somehow be overturned. In Mr. Lindell’s telling, Mr. Trump would have been back in office by last August. The former president began telling associates the same thing, privately urging supporters to echo it and pressing conservative writers to state it.

August came and went with no return by Mr. Trump, but that did little to quash the idea. Mr. Flynn, who recently met with Mr. Trump at Mar-a-Lago, according to people close to the former president, posted messages on the social media platform Telegram calling for decertification of the results in Wisconsin.

But even among Mr. Trump’s staunchest backers, there is a divide over the decertification efforts, with some calling them a waste of energy.

Mike Roman, a former Trump campaign official, pointed out at a recent event with conservative activists in Pennsylvania that the idea of Mr. Trump being reinstated as president was not realistic.