Smeared as a Groomer, a Michigan Democrat Goes on Offense

As Mallory McMorrow awoke last Monday morning, she found herself transformed into a creature she didn’t recognize.A colleague in the Michigan State.. 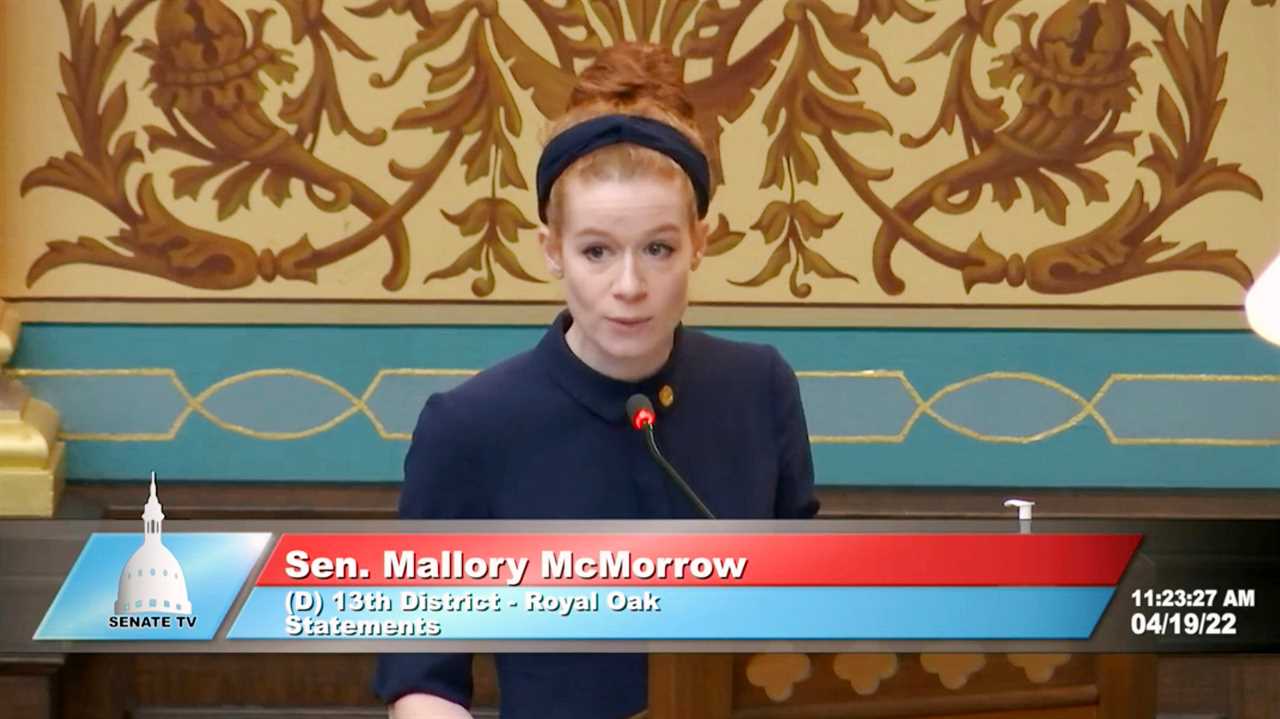 As Mallory McMorrow awoke last Monday morning, she found herself transformed into a creature she didn’t recognize.

A colleague in the Michigan State Senate, Lana Theis, had sent a fund-raising email accusing her of wanting to “groom and sexualize” children. Theis, a Republican who has latched on to Donald Trump’s fantasy of a stolen 2020 election, had invented an outrageous smear against someone who wasn’t even a direct political opponent.

McMorrow was, in her own words, “livid.”

A relatively new legislator and the mother of a 1-year-old, McMorrow was also genuinely shocked. Even though she had been watching as Republicans across the country pushed a spate of new laws limiting how teachers can talk about gender and sexuality, she didn’t expect to be drawn into the fight personally.

“The fact that you could just kind of fling this accusation at me was so deeply hurtful,” she said in an interview, adding that Theis’s email was “vile and disgusting.”

What happened next was the kind of moment around which political careers are born.

McMorrow “just sort of sat in the feelings for the day and thought about how horrible I felt,” she recalled. On her 90-minute commute from suburban Detroit to Lansing, the Michigan capital, she wrote and rewrote possible responses in her head. She consulted L.G.B.T.Q. people she knew to get their input.

Then she decided to punch back. Hard.

The resulting speech, made on Tuesday on the floor of the Michigan State Capitol, was watched and shared by hundreds of thousands of Americans in the days that followed. Summoning all the righteous fury she felt, McMorrow ripped Theis for promoting a “hollow, hateful scheme.”

“So who am I?” she said. “I am a straight, white, Christian, married, suburban mom who knows that the very notion that learning about slavery or redlining or systemic racism somehow means that children are being taught to feel bad or hate themselves because they are white is absolute nonsense.”

She went on, “I want every child in this state to feel seen, heard and supported, not marginalized and targeted because they are not straight, white and Christian.”

Activists on the left, frustrated that so few elected Democrats were speaking out about the Republican offensive on L.G.B.T.Q. issues, applauded. Cable TV bookers lined up. Jimmy Kimmel did a segment. President Biden called her and thanked her for saying “a lot of what needed to be said,” she recalled. She raised a quarter of a million dollars in less than 24 hours — an astronomical sum for a state lawmaker.

“She’s articulating what many people are feeling,” said Jim Wallis, a progressive theologian at Georgetown University, who called McMorrow a “threat” to the religious right. “She’s representing more people than she can even imagine.”

A rising Democrat in Michigan

Days before the episode, McMorrow was one of three Democratic lawmakers who walked out on a prayer Theis gave to open the legislative session.

The invocations are typically nondenominational boilerplate. But this one was different.

“Dear Lord, across the country we’re seeing in the news that our children are under attack,” Theis said, alluding to “forces that desire things for them other than what their parents would have them see and hear and know.”

“To me, it was such a vile misuse of that moment,” McMorrow said.

She tweeted after the walkout, “Without sharing or repeating closed-minded harmful words from a sitting Senator under the guise of a ‘prayer,’ to every child in Michigan – you are perfect and welcome and loved for being exactly who you are.”

Theis did not respond to a request for comment.

Some pundits have compared McMorrow to Wendy Davis, the Texas state lawmaker whose tennis-shoe-powered filibuster of an abortion bill in 2013 elevated her, briefly, into the national conversation.

But unlike Davis, who later tried and failed to win higher office, McMorrow hails from a closely divided state. Democrats in Michigan are trying to hang on to the governorship and retake the Legislature after an independent commission redrew what had been heavily gerrymandered districts.

And McMorrow, who was first elected in 2018 and is just 35, is seen in the state as one of the Democratic Party’s most promising young talents, with a wealth of possibilities now before her.

“I considered her a rock star even before last week,” said Jeff Timmer, a former executive director of the Michigan Republican Party who now supports Democrats. He said the speech might help position McMorrow for a statewide run in the future.

For its part, the Michigan Republican Party has been roiled by Trump’s obsession with the 2020 election, and the Trump wing has come out on top so far. On Saturday, at its state convention, the party endorsed candidates for attorney general and secretary of state who back the former president’s false claims.

‘You came after the wrong mom’

McMorrow draws a through line between the right’s focus on gender in schools and its focus on relitigating the past.

“This is about finding and creating issues that create a moral panic that target marginalized groups of people as a way to deflect, as a way to fearmonger and make people hate somebody and fear them to their core,” she said.

Her speech struck a chord on the left, Democrats said, because many in the party hunger for someone to engage Republicans in these kinds of cultural fights, whether it’s critical race theory or transgender rights. Democratic campaigns and candidates often find themselves paralyzed by the right’s attacks, while their consultants advise them to change the subject to pocketbook issues like jobs and health care.

It was important to speak out now, McMorrow said, for two main reasons.

The first was moral. “We can’t constantly ask the L.G.B.T.Q. community to defend themselves,” she said. “Because as long as we stand aside, it’s going to keep happening.”

And the second was political. “We’ve seen over the past few years that if we’re afraid to say anything, it just keeps growing,” she said. “Because there’s no pushback. There is no consequence.”

Her message to Theis, and to others like her?

“You came after the wrong mom, frankly.”

Elon Musk’s impending purchase of Twitter, should his takeover go through as planned, could have a seismic effect on American politics over the long term.

But there’s one way in which the Tesla mogul could have an immediate impact: by bringing back Donald Trump.

Musk has offered only crumbs of information about his intentions, and did not respond to emailed questions on Monday. But his cryptic tweets and public communications with Twitter’s current management suggest he is motivated by the concern, prominent on the right, that the social media company has gone too far in barring certain kinds of speech on its platform.

On Monday, for instance, Twitter announced it would not allow advertising that denied the scientific consensus on climate change. For good or ill, a more freewheeling Twitter could drastically alter the complexion of the site, empowering factually dubious narratives and manipulation of the sort that flourished during the 2016 election.

One immediate question is whether Musk’s purchase would empower the return of the former president, whose account was permanently suspended by Twitter two days after the Jan. 6 riot. At the time, @realdonaldtrump had more than 88 million followers, and Trump’s bombastic online persona exerted an immediate and powerful grip over his party and American political life in general.

“As someone who has been a subject of his press-release attacks, they don’t pack the same punch his tweets did,” said Alyssa Farah Griffin, a former White House director of communications under Trump.

“Replatforming Trump would thrust us back into the world in which our entire political discourse is perpetually upended by his tweets,” said Jesse Lehrich, a former Hillary Clinton spokesman who helped found a nonprofit focused on tech companies and political speech.

On the other hand, voters have consistently told pollsters that they disapprove of Trump’s tweets, so his presence could also redound to the benefit of Democrats who are in desperate political need of a villain.

“Dems would be delighted to have him back, if only to change the subject from inflation and ineffectuality,” said Liam Donovan, a Republican lobbyist in Washington.

“Republicans who are paid to win elections would have considerable heartburn,” he added.

Trump told Fox News on Monday that he would not return to Twitter.

“I hope Elon buys Twitter because he’ll make improvements to it and he is a good man, but I am going to be staying on Truth,” the former president said, referring to his own Twitter-like platform, Truth Social.

Jason Miller, a former Trump spokesman who is now the chief executive of Gettr, another Twitter clone, said he did not expect Trump to change his mind.

“My perception from speaking with him and from his public comments is that he’s more dug-in here,” Miller said.

But Truth Social has struggled to gain traction since its introduction this year, and an overhaul of Twitter’s speech policies could undermine the new Trump site’s positioning as a haven for persecuted conservatives.

Other recent comments by Trump suggest he relished engaging in combat with critics on Twitter — a feature that is decidedly absent in the right-wing monoculture of his new platform.

“It used to be a war on Twitter, but it was a very interesting war,” Trump said this month. “We’d be fighting back and forth and it was great stuff.”