In Reversal, F.D.A. Delays Push for Shots for Children Under 5

WASHINGTON — In a striking reversal, federal regulators said on Friday that they would wait for data on how well three doses of Pfizer-BioNTech’s.. 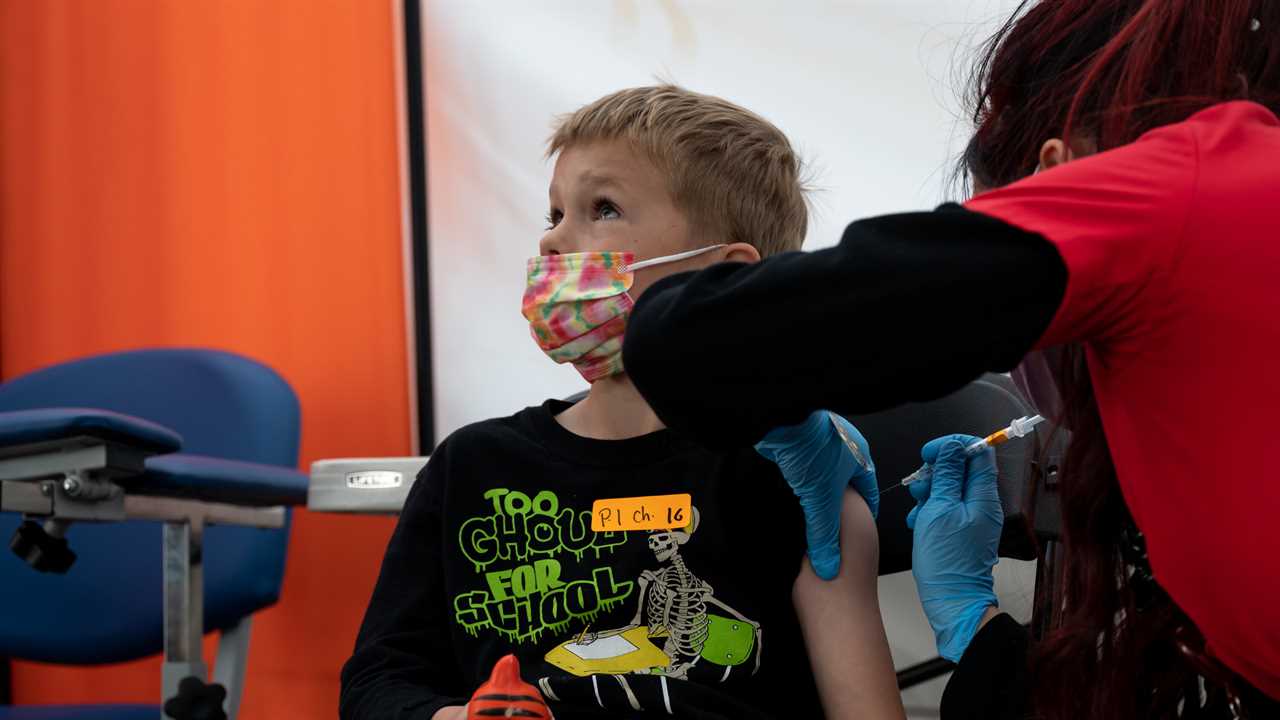 WASHINGTON — In a striking reversal, federal regulators said on Friday that they would wait for data on how well three doses of Pfizer-BioNTech’s coronavirus vaccine work in children younger than 5 before deciding whether to authorize the vaccine for that age group.

The decision by the Food and Drug Administration most likely rules out shots for roughly 18 million of the nation’s youngest children until at least April. The Biden administration had been hoping to expand vaccination to those 6 months through 4 years of age as early as next week. They are the only Americans not yet eligible for shots.

Pfizer-BioNTech asked for the delay after the companies discovered that the Omicron wave had led to a far higher rate of infection than they had previously recorded among young volunteers in their clinical trial. The new data underscored that the Omicron variant was better than the earlier Delta variant at evading the vaccine’s protection, and it showed that two doses, which had already fallen short by another measure, were not effective enough.

As a result, the companies and the F.D.A. agreed to wait for the results from a third dose, which are expected in early April.

The turnabout came as the Centers for Disease Control and Prevention released data on Friday showing that booster shots of the Pfizer and Moderna vaccines lose some of their effectiveness against emergency room visits and hospitalizations by the four-month point. The agency said the data was some of earliest evidence on the durability of boosters. While it showed three doses offered better protection than two, it raised sobering questions about how long that protection lasts against severe disease.

Together, the two developments dampened some earlier optimism about vaccines. They also presented at least a temporary setback for the Biden administration’s vaccination campaign.

Researchers hope that by April, Pfizer and BioNTech will be able to demonstrate that three doses protect children, with data showing both stronger immune responses and more success in warding off symptomatic infections.

The companies said in a news release that they would wait for the data on a three-dose vaccine given the study’s rapid pace and because they “continue to believe it may provide a higher level of protection in this age group.”

The F.D.A. began pressing Pfizer-BioNTech to seek authorization for a two-shot regimen weeks ago, despite disappointing results from the trial that were announced in December. Children ages 2 through 4 produced only 60 percent of the antibody levels that older teens and young adults did. The older age group was used as a benchmark because the vaccine had proven effective for them.

Children 6 months to 2 years did produce the sought-after level of antibodies. The dosage was one-tenth of that given to those 12 and older, and there were no serious safety concerns, officials have said.

This month, Pfizer-BioNTech submitted a request for emergency authorization, and the F.D.A. scheduled a meeting of its outside advisory committee for next Tuesday, saying it hoped to get a head start on vaccinating young children with two shots, likely adding a third later.

Then, late on Thursday, Pfizer alerted the F.D.A. that it had more recent data, from mid-January on, showing a more discouraging picture as the Omicron variant bore down. The new data revealed that two doses were not sufficiently effective in preventing symptomatic infection. The illness was generally mild and no children were hospitalized, according to people familiar with the study.

In a call with reporters on Friday, Dr. Peter Marks, the F.D.A.’s top vaccine regulator and an advocate of the two-dose strategy, said the latest data had forced a new reckoning. “Yes, some of this was late breaking,” he said, “but that’s what our job is — to adjust to it.”

While many pediatric experts had been sympathetic to the F.D.A.’s initial push to consider two doses, some said on Friday that the regulators were right to hold off.

“I honestly let out a woo-hoo of elation that reason and science had prevailed, and that they actually really did do the right thing,” said Dr. James Conway, a pediatric infectious disease expert at the University of Wisconsin-Madison and a fellow of the American Academy of Pediatrics.

Dr. Conway said he had been concerned that prematurely authorizing a partial vaccine regimen for young children without compelling data would have intensified suspicion among some Americans that the federal government had cut corners.

Norman W. Baylor, a former director of the F.D.A.’s vaccines office, said the agency had been “reactionary” on a highly delicate issue, perhaps because of public pressure. A lot of parents, he noted, had been saying, “I don’t care, just give my kid the two doses and even if it’s a little bit and they’re not protected fully, that’ll do the trick.”

“But we don’t know that until the data are reviewed,” he said.

Dr. Baylor and some other experts questioned whether any coronavirus vaccine developer had yet figured out an effective dose for the youngest children, or how durable protection would be for them. Moderna, the other major vaccine manufacturer, is currently testing a stronger dose than Pfizer’s for children under 5. But so far, Moderna’s vaccine has only been authorized for adults.

Some parents on Friday expressed anguish over the news.

“I’m feeling despair, despondent, frustrated, confused,” said Rachel Perera, a graduate student in Los Angeles and mother of an 8-month-old son. “I feel like the goal posts have been moving.”

Ms. Perera said that she had been hoping to make a long-awaited trip to the East Coast this spring to see friends and introduce them to her son. She and her husband have been avoiding most contact with others during the Omicron wave in order to protect him.

“I was hoping that we would have some hope, that it would help us get some semblance of normalcy,” she said of the vaccine for children under 5. “I feel like the world is moving on without us, the parents of little kids.”

The F.D.A.’s most recent vaccine decisions have been highly fraught. Top Biden administration health officials pushed hard for authorization of booster shots in the fall, only to be forced to scale back their plans. But they were vindicated, some experts say, when the Omicron variant showed that it could more easily evade two-dose protection than its predecessor, the Delta variant.

Covid boosters. Data released by the Centers for Disease Control and Prevention showed that booster shots against the coronavirus lose much of their potency after about four months, adding to evidence suggesting that some Americans may need a fourth dose.

Vaccines for young children. The Food and Drug Administration said that it would wait for data on the effectiveness of three doses of the Pfizer-BioNTech coronavirus vaccine in children younger than 5 before deciding whether to authorize it for that age group.

Monoclonal treatment. The F.D.A. gave emergency authorization to a new monoclonal antibody drug that has been found in the laboratory to be potent against Omicron. The Biden administration says it will make the therapy immediately available, free of charge.

Around the world. Russia reported a daily record of 200,000 new coronavirus cases among its vaccine-skeptical population. Trucker-led protests in Canada against vaccine mandates have inspired similar demonstrations in France.

At least several members of the F.D.A.’s outside advisory panel were skeptical of the two-dose plan for the children under 5, and it was not clear that the panel would have recommended it. The panel’s advice is not binding, but the F.D.A. usually follows it.

The meeting scheduled for Tuesday had been expected to focus on just how urgent a priority the F.D.A. and its outside advisers consider vaccination to be for the youngest age group. Dr. Ofer Levy, a pediatrician at Harvard Medical School and member of the F.D.A. advisory committee, said on Friday that the agency would have been criticized no matter how it ruled.

“They’re under intense pressure,” he said. “I don’t envy them.”

Some infectious disease experts have argued there was not enough of an emergency to justify the F.D.A.’s push to authorize two doses, given the combination of the trial results, the decline in Omicron cases in many parts of the country and the fact that young children are unlikely to become severely ill from the virus.

Others argued that the toll of the virus on children required the F.D.A. to jump-start its review process. Nearly 400 children under 5 have died of Covid-19 since the beginning of the pandemic. Even if Omicron is fading, those experts argued, another variant could emerge as a new threat just as unexpectedly as Omicron did in November.

Children have been more at risk during the Omicron wave, pediatricians have said.

Dr. Kristin Moffitt, a physician at Boston Children’s Hospital, said that as more young children showed up in hospitals this winter, many of those she saw in her hospital were more prone to severe illness because they had underlying conditions, including congenital heart disease or immune deficiencies.

“Those with underlying conditions tended to be more severe and require I.C.U. care,” she said. “The majority needed a couple of days of oxygen supplementation, as well as help staying hydrated.”

Dr. Jessica Snowden, the chief of the pediatric infectious disease division at Arkansas Children’s Hospital, said Covid cases at her hospital had fallen from a daily peak of 46 in mid-January to 19.

Still, she said, “I hear from lots of parents every day asking, ‘Do you know, do you know? When’s it going to be approved?’” She added, “Think about how fast a new variant can spread.”

Still, the uptake of the vaccine in children — including in those 5 to 11, who began receiving Pfizer-BioNTech shots in early November — has been strikingly low. Only about a third of the 28 million children in that age group have received at least one dose so far, according to C.D.C. data. Three in 10 parents of children younger than age 5 now say that they intend to get them vaccinated as soon as shots become available, according to a recent survey from the Kaiser Family Foundation.

Malia Jones, a scientist at the University of Wisconsin-Madison who studies vaccine hesitancy in children, predicted that parents would be even less likely to get shots for the youngest children. Parents of children in this age group, she said, have long been prone to believe misinformation about childhood vaccines, including theories that they are filled with toxins or cause autism.

“My expectation is that uptake is going to be really, really poor,” she said of the coronavirus shot for children younger than 5. “We’re already facing a very steep uphill battle for this age group, whether or not the efficacy data are there.”