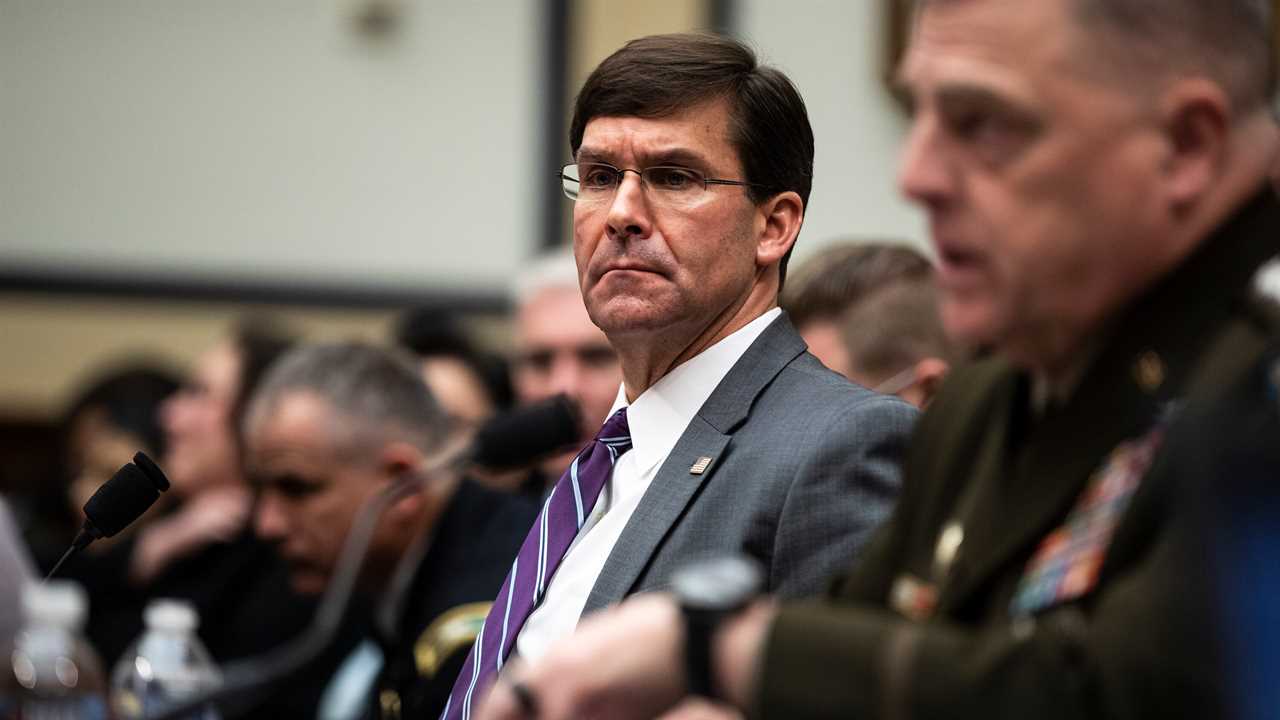 Former Defense Secretary Mark T. Esper on Sunday sued the agency he once led, accusing officials at Pentagon of improperly blocking significant portions of an upcoming memoir about his tumultuous tenure under President Donald J. Trump.

The allegations by Mr. Esper, whom Mr. Trump fired shortly after losing his re-election bid last November, are laid out in a lawsuit filed in Federal District Court in Washington, D.C.

“Significant text is being improperly withheld from publication in Secretary Esper’s manuscript under the guise of classification,” the suit said. “The withheld text is crucial to telling important stories discussed in the manuscript.”

Mr. Esper said in a statement that his goal with the book, titled “A Sacred Oath,” which is expected to be published in May, was to give the public “a full and unvarnished accounting of our nation’s history, especially the more difficult periods.”

He added: “I am more than disappointed the current administration is infringing on my First Amendment constitutional rights. And it is with regret that legal recourse is the only path now available for me to tell my full story to the American people.”

John F. Kirby, the Pentagon’s chief spokesman, said the agency was aware of Mr. Esper’s concerns. “As with all such reviews, the department takes seriously its obligation to balance national security with an author’s narrative desire,” Mr. Kirby said. “Given that this matter is now under litigation, we will refrain from commenting further.”

Mr. Esper is among the most senior former government officials, if not the most senior, to sue for prior restraint related to a book. The lawsuit came a year after a presidential campaign in which President Biden promised to restore the norms that had been tossed aside by his predecessor.

Executive branch employees — ranging from senior officials like the secretary of state and the national security adviser to low-level ones like federal prosecutors and agents — have to submit their manuscripts to the prepublication review process. That process is intended to prevent materials that may damage national security from becoming public while protecting the author’s First Amendment rights.

In cases where an agency or a department has an issue with information being revealed, that section of the book is supposed to be removed or edited to obscure the problematic content. The process is not supposed to be used to smother embarrassing or politically damaging information from becoming public.

During the Trump administration, officials were accused of using prepublication review to silence John R. Bolton, the former national security adviser who was trying to publish a book on his time working for Mr. Trump that contained many anecdotes that the president wanted to keep private.

A career administration official accused some of Mr. Trump’s top aides of improperly inserting themselves in the process to silence Mr. Bolton. Despite that interference, Mr. Bolton published the book, “The Room Where It Happened,” leading Mr. Trump’s Justice Department to sue Mr. Bolton for the profits. It also opened a criminal investigation into him. In June, the current attorney general, Merrick B. Garland, dropped the suit and the investigation.

According to the lawsuit, Mr. Esper submitted a draft of the manuscript in late May to the Defense Office of Prepublication and Security Review.

“As defense secretary for nearly 18 months, he led D.O.D. through an unprecedented time of civil unrest, public health crises, growing threats abroad, Pentagon transformation and a White House seemingly bent on circumventing the Constitution,” the lawsuit said. “‘A Sacred Oath’ is Secretary Esper’s unvarnished and candid memoir of those remarkable and dangerous times.”

Mr. Esper worked closely with the prepublication review office for six months, according to the suit, eventually coming to believe the process was taking an unusually long time.

On Nov. 8, Mr. Esper emailed his successor, Defense Secretary Lloyd J. Austin III, about his concerns. When he submitted the manuscript for review in May, Mr. Esper wrote, he was confident it contained nothing that was classified or compromised national security, a view he still holds.

But when the office returned the manuscript to him last month, “multiple words, sentences and paragraphs from approximately 60 pages of the manuscript were redacted,” Mr. Esper wrote. “No written explanation was offered to justify the deletions.”

Mr. Esper said that in follow-up conversations, the office was not able to confirm that “the redacted items contain classified information or compromise national security.”

He said that some of the redactions “asked me to not quote former President Trump and others in meetings, to not describe conversations between the former president and me, and to not use certain verbs or nouns when describing historical events.”

“I was also asked to delete my views on the actions of other countries, on conversations I held with foreign officials, and regarding international events that have been widely reported,” Mr. Esper continued. “Many items were already in the public domain; some were even published by D.O.D.”

He said that in another redaction, defense officials sought a change to information that the department had made public in January 2020. Mr. Esper never heard back from Mr. Austin. But for a week, he asked the department to justify its redactions and edits. Instead of a justification, he received notice a week later that his amended manuscript was ready.

Mr. Esper did not identify specific aides in the prepublication office with whom he was speaking, but he described them as professional in his interactions. In his email to Mr. Austin, Mr. Esper wrote that on Nov. 5 he had discussed the review process with the defense secretary’s chief of staff, Kelly Magsamen, and the department’s director of administration and management, Michael B. Donley, to try to advance the process. They suggested that he sit with the unit proposing most of the redactions “to try to find compromise language.”

“While I appreciate their efforts, I should not be required to change my views, opinions or descriptions of events simply because they may be too candid at times for normal diplomatic protocol,” Mr. Esper said in the email, adding that the review process was “about protecting classified information and not harming national security — two important standards to which I am fully committed” and that his “constitutional rights should not be abridged because my story or choice of words may prompt uncomfortable discussions in foreign policy circles.”

Also troubling to Mr. Esper, according to the suit, was the fact that some stories in the draft manuscript suddenly began appearing in news articles. “At least one story, which was more than a year old and known to only a small handful of senior D.O.D. officials, had not previously been publicly discussed, and the timing of the appearance appears suspicious,” the suit said.

The department, the suit said, “has failed to demonstrate the existence of substantial government interests that would enable it to prohibit the publication of unclassified information within Secretary Esper’s manuscript.”