GOD of War Ragnarök’s Odin takes you on a whistle-stop tour of Asgard while you follow along.You see how he walks and talks, addresses his servants,..

GOD of War Ragnarök’s Odin takes you on a whistle-stop tour of Asgard while you follow along.

You see how he walks and talks, addresses his servants, and you get a glimpse of his influence and power. 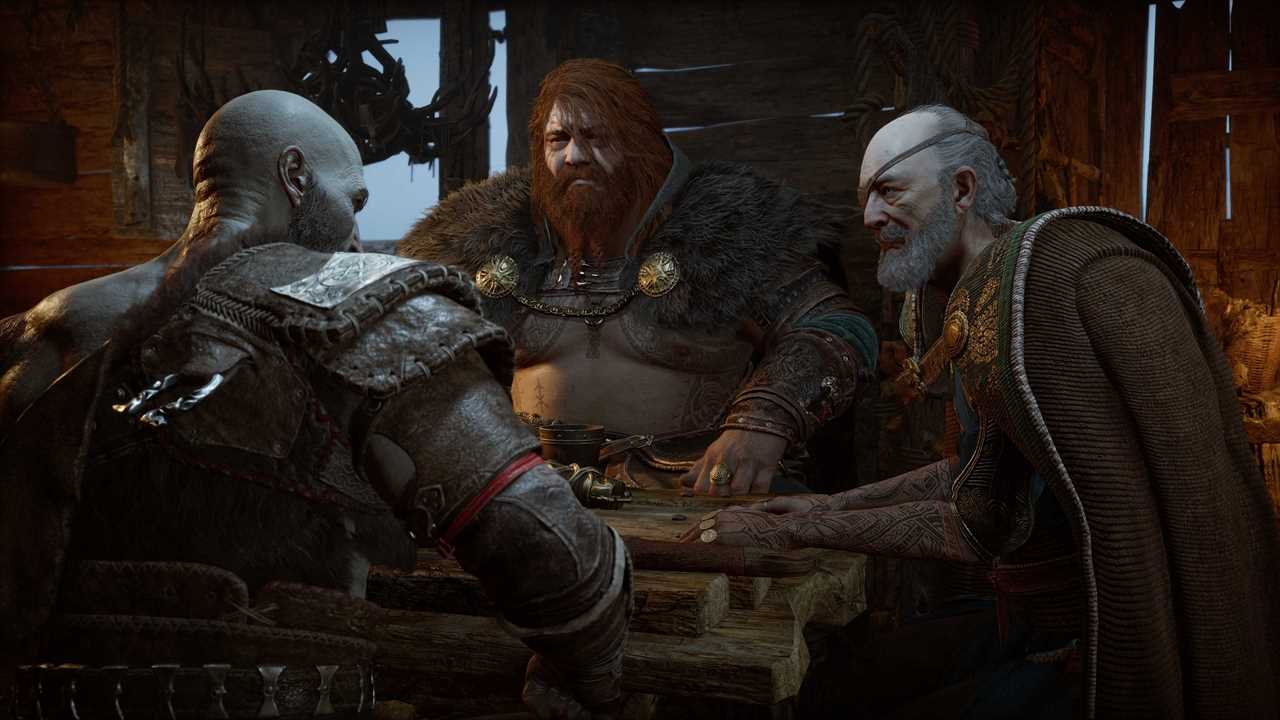 Kratos, Thor and Odin in God of War Ragnarök.

The same actor Richard Schiff pulls off a similar trick in The West Wing, as he chews up his subordinates who line the halls, while playing Toby Ziegler.

We spoke to the game’s director Eric Williams on whether all this was intentional.

He says: “The walk and talk was an homage to what we love and [it was] why we wanted Richard Schiff to play that character.

“He didn’t even know we were doing it because he just did the voiceover and we put that together with the normal animation set.

“We showed him when he was doing the VO session and he was like, ‘Oh, that’s cool!’”

Ragnarök’s Odin, is a conman, a mob boss, a magician. He doesn’t have an intimidating presence, but he’s still very much a threat.

As Williams describes him: “He’s this unassuming old man. And then you sit down to play chess with him, and all of a sudden, he’s emptied your pockets.”

As an actor most famous for playing a character who works in politics, Schiff knows all about emptying your pockets.

When Sony Santa Monica first called him about the role, he was in the car with his son.

Williams recalls: “He didn’t know what it was when we made the call to him.

“His son was a huge fan and he broke down God of War 2018 [for him]. He wrote down all these highlight notes on two pages, so his dad knew how to talk to us about everything.

“Who does that? He’s Richard Schiff. He could just show up!”

In-game Odin shows up at Kratos’ house unannounced, sauntering through as if he owns the place.

The rest of the new characters have a similar twist to them, helping them to stand out among the many interpretations of the Norse gods in popular culture.

Williams explains: “It’s tough because a lot of people either know the Prose Edda – they are super academic about it – or they know Marvel.

“We wanted to make Norse characters inside the God of War universe. We read everything about the characters and tried to get as much background as possible, but then we were like, ‘Well, that’s not going to work with the story we want to tell.’ So then we started fiddling with them.”

Thor is one such character who, while impressively built, is about as heroic as a slug. In Ragnarök, he’s more of a henchman than a warrior.

On this decision, Williams says: “I wanted Thor to be this manchild – he’s burly, hedonistic, he drinks, he f**ks.

“That’s what he does. It makes sense why he’s out there doing all this dirty work for Odin. As much as he wields that hammer, Thor is the hammer.”

Much like how Richard Schiff was earmarked for his work on The West Wing, Ryan Hurst, who plays Thor, got cast because of his role as Harry ‘Opie’ Winston in Sons of Anarchy.

Williams explains: “We’ve always looked at the Aesir as a biker gang and the Vanir as hippies.”

Art director Raf Grassetti adds: “[Eric Williams] mentioned the bikers, especially Ryan Hurst being from Sons of Anarchy, was a huge influence for the role, and how we will reflect that on the character.

“The Greek gods had a lot of gold. We wanted to play with what [gods] would look like in Norse mythology.

“So they would have way less gold, and they wouldn’t care that much about their appearance. They’re living with humans, and that really influenced the design and how they act.

“You can feel the tension of dealing with gangs and the mafia was also something very present in how these characters interact.”

At the height of the pandemic, the work-from-home mandates began, and Williams travelled to Hurst’s house to get the work done.

He says: “So me and Matt Sophos, the narrative director, went to his house. He’s got, like, ten dogs. It was amazing.

“We sat down for three hours with him, and we brought pictures, and we walked him through the whole story. At the end of it, he was like, ‘Man, I wanna do this so bad. I’ve never done anything like this before.’

“We could see he was really engaged in it. Then finally, at the end, he says, ‘Just make me one promise, man. Don’t make me big and dumb.’”

Despite being big and dumb, Thor’s character has many layers. Just because his needs are simple doesn’t mean he isn’t complex inside.

He gives us a glimpse of what Kratos might have become if he hadn’t defied Zeus.

Williams explains: “We love mirrors and a cautionary tale.”

2018’s God of War is a father teaching his son to survive, while his son teaches him how to live in return.

In Ragnarök, this two-sided teaching becomes even more apparent as the pair have to work out their relationship.

If you’ve only played the reboots, you might not know just how bad Kratos can be.

In God of War 3, he saves a princess from Poseidon and then uses her body to hold open a door by stuffing her into a crank.

Ragnarök makes Kratos more reflective on his past evils.

Williams explains: “It’s like a little bit of therapy session for him to get that stuff out and not be scared to talk about it.

“Because if you can’t talk about it, it can make you the person you were. If those are the things that drove you to do those things, and you can’t let them go, they can come back.”

Kratos is a character who truly needs redeeming, and it’s incredible that the writers could pull this off.

Go too far with it and he seems fake, go the other way, and it’s too edgy.

Williams says: “It was super tough. I remember Cory Barlog coming to me and he’s like, ‘Dude, he’s too passive.

Barlog was concerned about the story’s direction early in development, before Christopher Judge was brought in to bring life to the character.

Williams recalls: “And then we sat down again. I told him, ‘Here’s the one thing that I don’t think is coming through yet.

“In these scenes, he’s reflecting on the fact that Faye lied to him. The woman who brought him back from the brink of destruction and made him human again.

“She lied to him. And he’s got to hold that.’ And then he started to see Chris’s performance. He was like, ‘Oh, s**t, this makes sense.’

“Kratos can’t answer the questions that his kid has about his nature. At the beginning of the game, he’s sitting there, he’s got the empty ashes bag in his hand.

“It’s just brutal. Every time I watch that, it just crushes me.”

One of the most memeable aspects of God of War 2018 was Christopher Judge’s delivery of the word “Boy”, which he used to address his son across the course of the game.

Yet, in Ragnarök, Kratos has more respect for Atreus, and it is shown through how he addresses him.

Williams says: “The team was like, ‘Really? Why? That’s our thing.’ But then when I explained, they were like, ‘Oh, yeah, that totally makes sense.’

“A lot of surface things are always easy, but you’ve got to dig a little deeper, and that takes effort.

“You gotta go, ‘Oh, man, that’s gonna be even better.’ And you called it out. Because that’s the only time he says ‘Boy’ in the whole game.

“The genesis of that whole piece was, you know when your parents are really mad at you and they use your middle name?”