The 234 areas where Covid cases are still rising – is YOUR area on the hotspot list?

CORONAVIRUS cases are still rising in 234 areas in the UK and this interactive map reveals if your local authority is on the list.Infections have..

CORONAVIRUS cases are still rising in 234 areas in the UK and this interactive map reveals if your local authority is on the list.

Infections have fallen in 141 places and Trafford in Greater Manchester currently has the most infections in the UK.

At the height of the pandemic last year, Manchester was riddled with Covid infections and mayor Andy Burnham actively tried to prevent the area going into a stricter lockdown tier.

While Trafford has the highest rate of infections, it is also one of the five areas that has seen the biggest jump in rates.

The health boss in the area has this week said she feels ‘helpless’ over the rise in cases.

She said: “We’ve been on the brink of putting out firmer messaging but our challenge is that we don’t have the legal power to enforce anymore.

“Most places are in very similar positions, we are feeling slightly helpless.”

Elsewhere and Ipswich has also seen a jump in infection rates, going from 478.8 to 679.5 in the last week.

Infection rates in the area have jumped by around 40 per cent in the last week.

He added that a rise had not yet been seen in hospital rates.

The director of public health in the area has urged people to remember the importance of vaccines.

Jonathan Gribbin said that even if you’ve had the jab, it’s important to get a PCR test if you have symptoms.

Wellingborough in Northamptonshire has also seen a rise, jumping from 555.7 to 735.5.

The rise in infections across the country comes as one scientist has warned against the next pandemic threat.

Oxford vaccine creator Professor Dame Sarah Gilbert said there is no vaccine against the Nipah virus which causes brain swelling.

But should it evolve to spread at a faster rate, as Covid has learned to do, it could be disastrous.

Dame Sarah said: “Something everybody is very much aware of now, is how as SARS-CoV-2 has spread through the world.

“It’s mutated, it’s evolved and what we’ve ended up with is the Delta variant which is very highly transmissible.

“If we get a Delta variant [evolved to be more transmissible] of Nipah virus then suddenly we’ve got a highly transmissible virus with a 50 per cent fatality rate.” 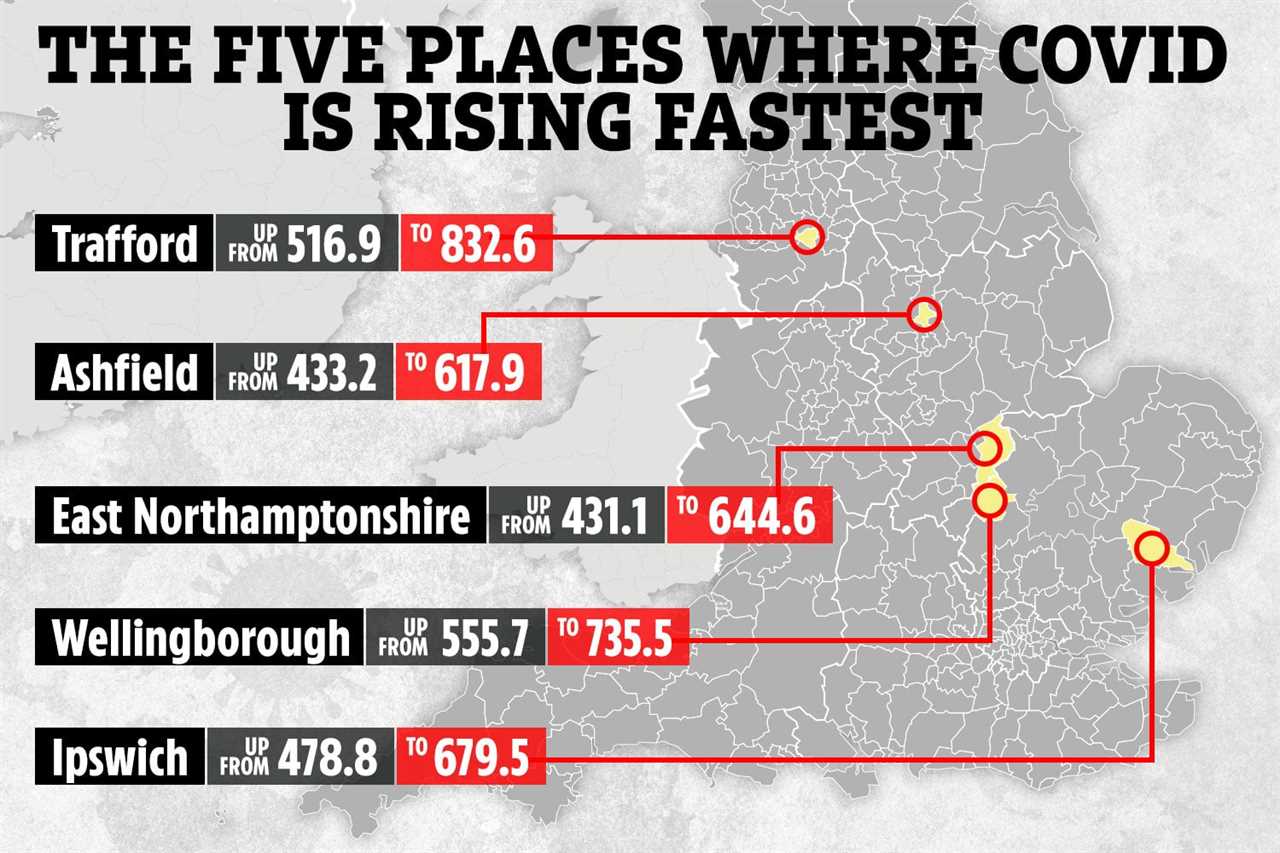