ITALY has ordered a Christmas lockdown with restaurants and bars forced to close their doors in a bid to battle a surge in coronavirus deaths.The..

ITALY has ordered a Christmas lockdown with restaurants and bars forced to close their doors in a bid to battle a surge in coronavirus deaths.

The no-nonsense crackdown comes amid reports victims’ bodies are to be stashed in churches and car parks in Veneto, in the north of the hard-hit country. 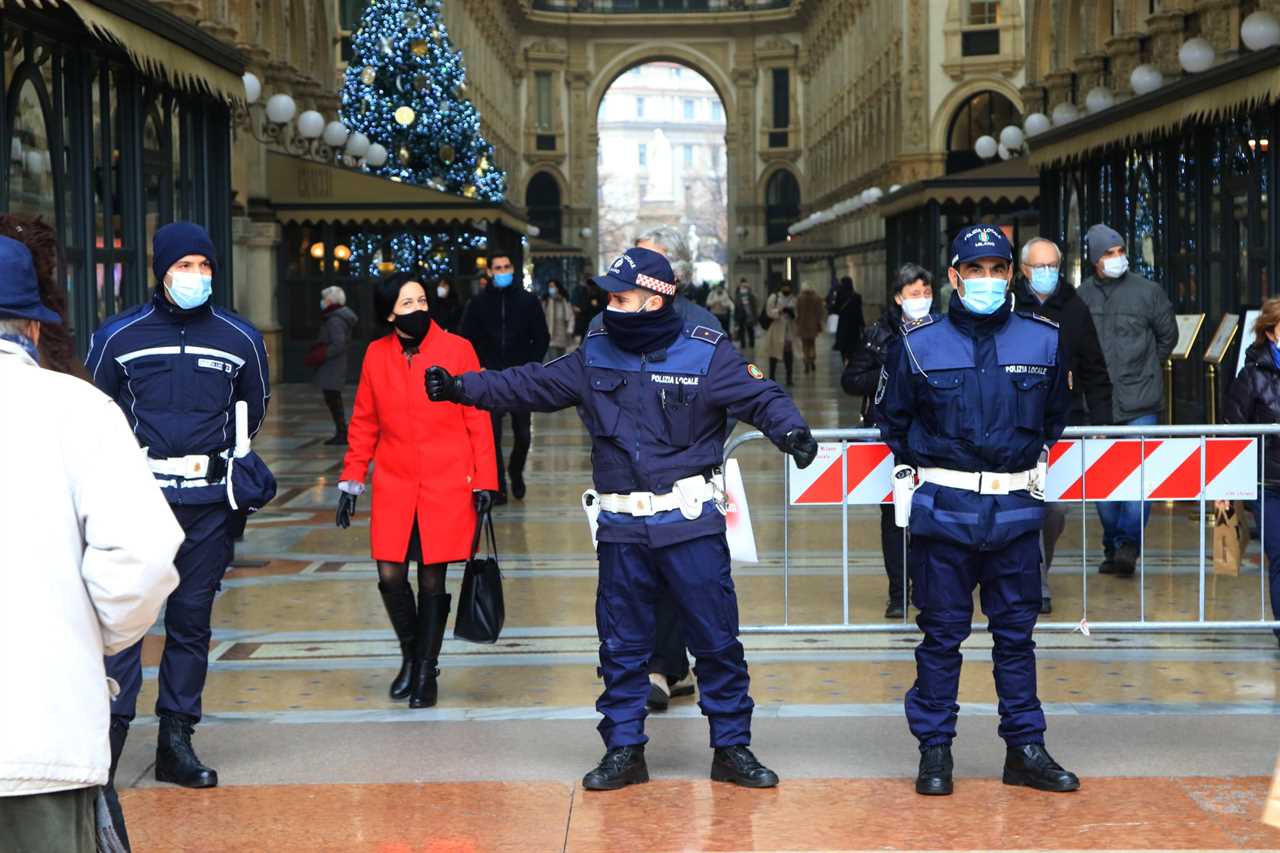 The whole of Italy will now be classified as ‘red’ – the highest level of restrictions.

Italy now has the highest Covid-19 death toll in Europe with more than 68,000 fatalities, and it recorded 15,401 new cases and 674 new deaths yesterday alone.

Last night, Prime Minister Giuseppe Conte announced new rules ordering people to stay at home and closing all restaurants and non-essential shops on December 24-27, from New Year’s Eve to January 3 and on January 5-6.

The whole of country will now be classified as “red” – the highest level of restrictions.

This means people will be allowed to leave their homes just once a day to visit friends or relatives, however travel between Italy’s regions will be banned.

“The virus continues to circulate everywhere. We can bend it, but we cannot defeat it,” said Conte.

“Our experts fear that the infection curve will increase during the Christmas period.”

He called the measures a “painful decision.”

Conte admitted that the authorities did not have the means to enforce the measures, but he asked Italians to respect a new limit to the number of people who meet and host only two adult guests at home. 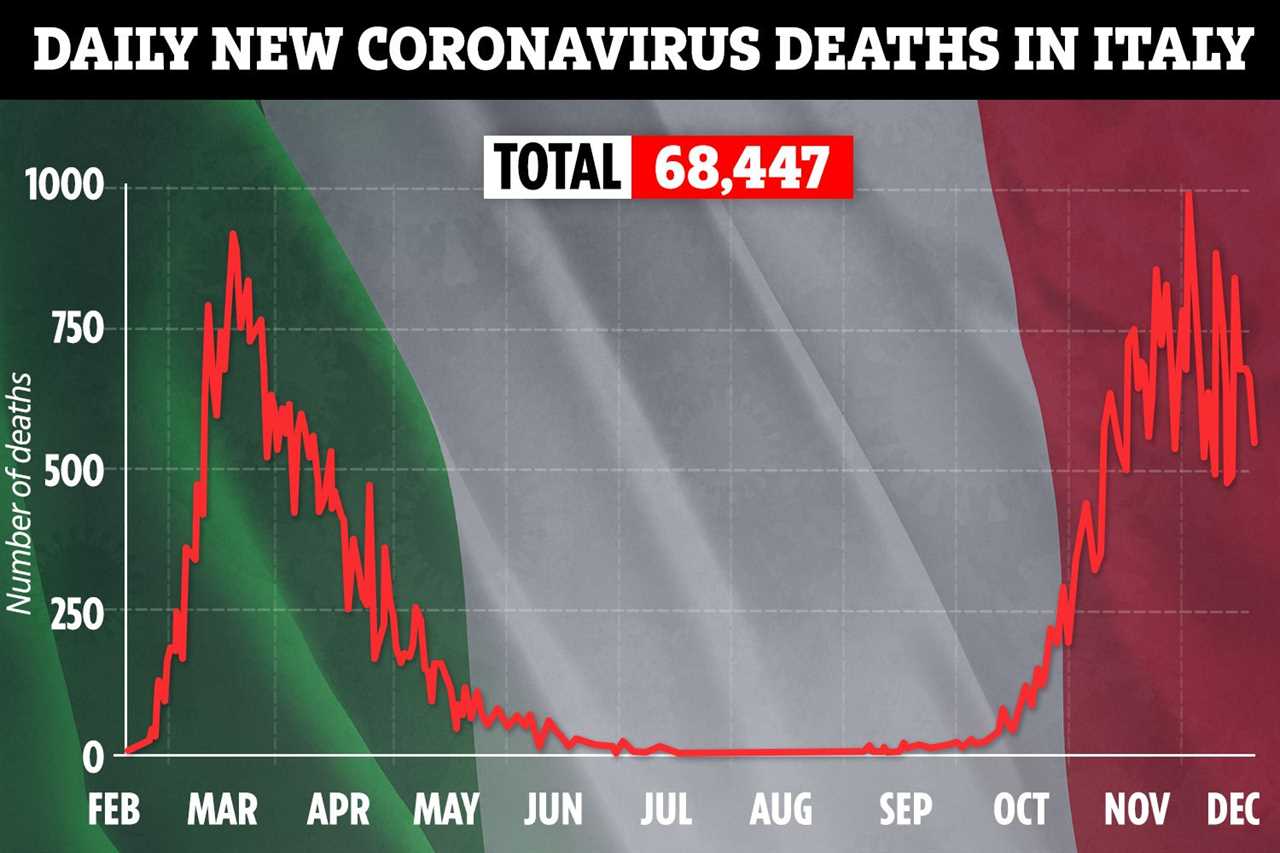 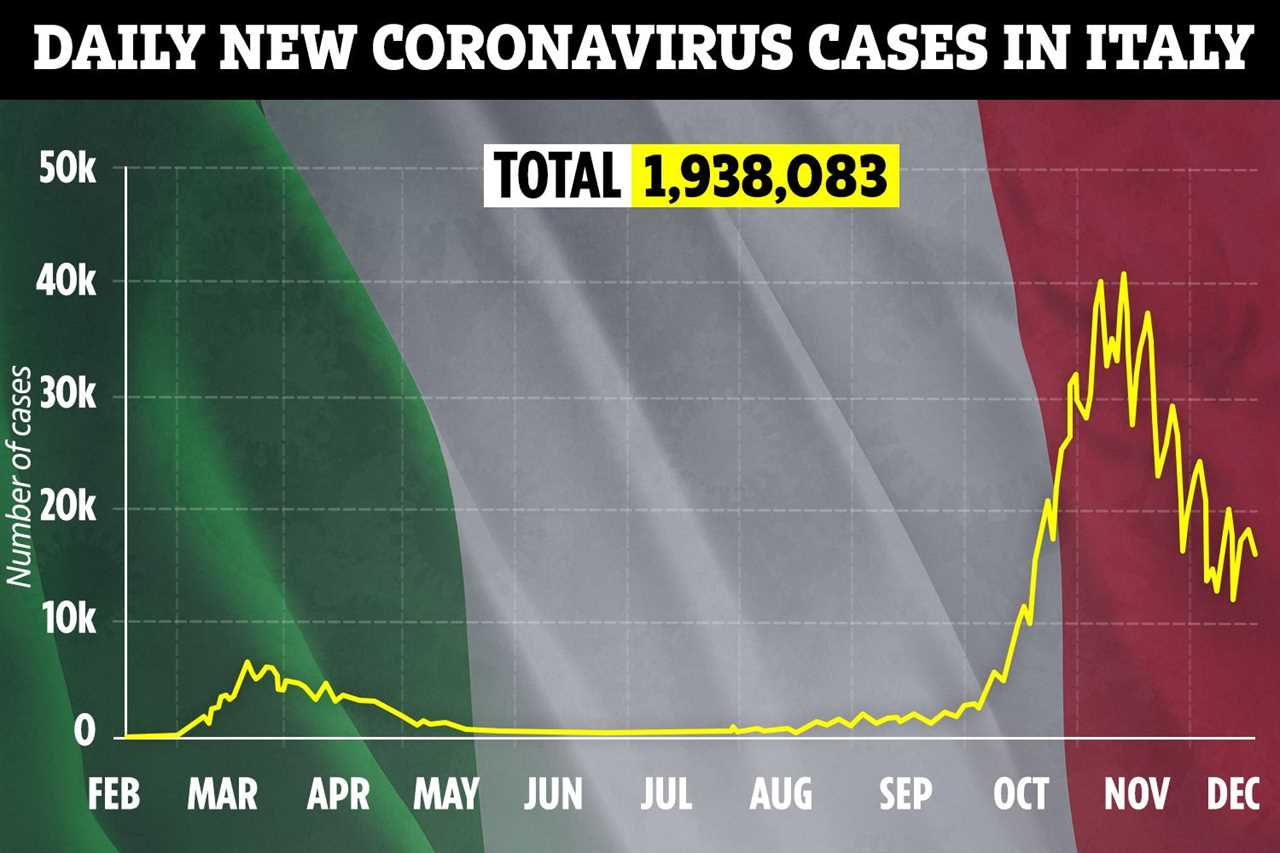 “If anyone is planning parties, big dinners or gatherings they are making a big mistake,” added Francesco Boccia, the regional affairs minister.

Food shops, hairdressing salons, pharmacies, tobacconists, laundries and bookstores will, however, be allowed to remain open.

Conte specified that the confinement would be relaxed on December 28, 29, 30, as well as on January 4, when shops would be able to remain open until 9pm and people would be allowed to move about freely.

As Italy prepares to vaccinate the country from next month, nowhere is suffering more than the region of Veneto, reports The Times.

On Thursday almost 100 people died there while 4,400 new daily cases, by far the highest of any region, were recorded.

Plans have now been made to store coffins in churches as the mortuary at the hospital in Montebelluna overflows.

And in Legnano a refrigerated container was set up in the hospital car park to handle the dead.

Surgeon Ivano Dal Dosso said: “In Legnano we recently had 20 Covid sufferers waiting in A&E for a bed and had to hook some up to ventilators right there and then while ambulances were queueing outside with more cases.”

News of the latest crackdown has been accepted by most Italians, say reports.

“It’s right that they prohibit departures after 20 December if it means travelling in safety,” Claudia Patrone, a 33-year-old lawyer, told AFP as she got off a train in Milan’s Central Station, one of Italy’s busiest.

“I took the test before leaving, I stayed locked in my house, I didn’t see anyone. The measure is right if everyone respects the rules and guarantees safety,”

Michele Lettini, a 64-year-old pensioner living in Milan, said: “The new decree is fine, but I would have been even more restrictive, I would have extended the red zone to all holidays to avoid contagions.”