THIS is not Freedom Day as such, but it certainly starts with a capital “F”.Boris has totally screwed up the liberation he’s been promising for 16..

THIS is not Freedom Day as such, but it certainly starts with a capital “F”.

Boris has totally screwed up the liberation he’s been promising for 16 miserable months. 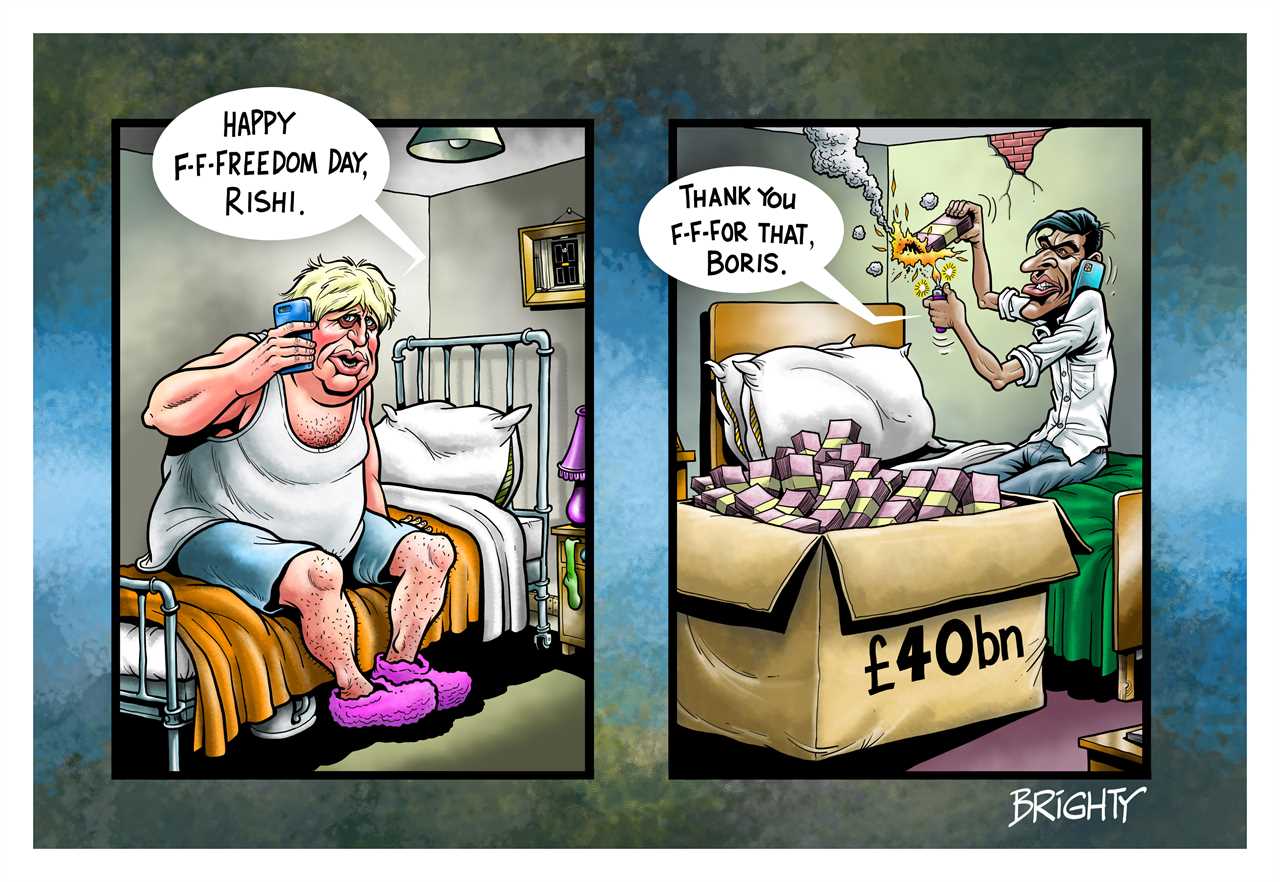 His vision of a life near-normal has been reduced in a flash to panic, pandemonium and a pingdemic shambles plunging many of us back into lockdown.

The monstrous £40billion Track And Trace failure was exposed yesterday, as the PM and Chancellor Rishi Sunak were pinged and put on special measures to avoid self-isolation.

Two hours later, in the fastest U-turn on record, both men opted to stay home and avoid a display of Hancock-sized hypocrisy.

The absence of a PM and his Chancellor from front-line duty is a shocking admission of policy failure.

For the rest of us, thanks to pingmania holidays are in chaos.

Trains have stopped running. Shops and pubs have closed. Nissan and Rolls-Royce are at a standstill.

Our crippled economy is sputtering just as it was about to take off.

This is not how it was meant to be.

At the height of the second wave in December, Downing Street gleefully trumpeted its vaccine roll-out as the arrival of the cavalry.

“It’s not how we go into this pandemic, it’s how we come out of it,” crowed ministers.

Well, on that basis, Boris Johnson should be a worried man.

And it’s entirely his own fault.

He has snatched failure from the jaws of his own ­dithering success.

To his credit, everyone over 18 has been offered at least one jab — and 35million have had both doses.

Two doses are barriers against every mutation so far identified.

If not totally immune, we are safer today than we could possibly have imagined last December. 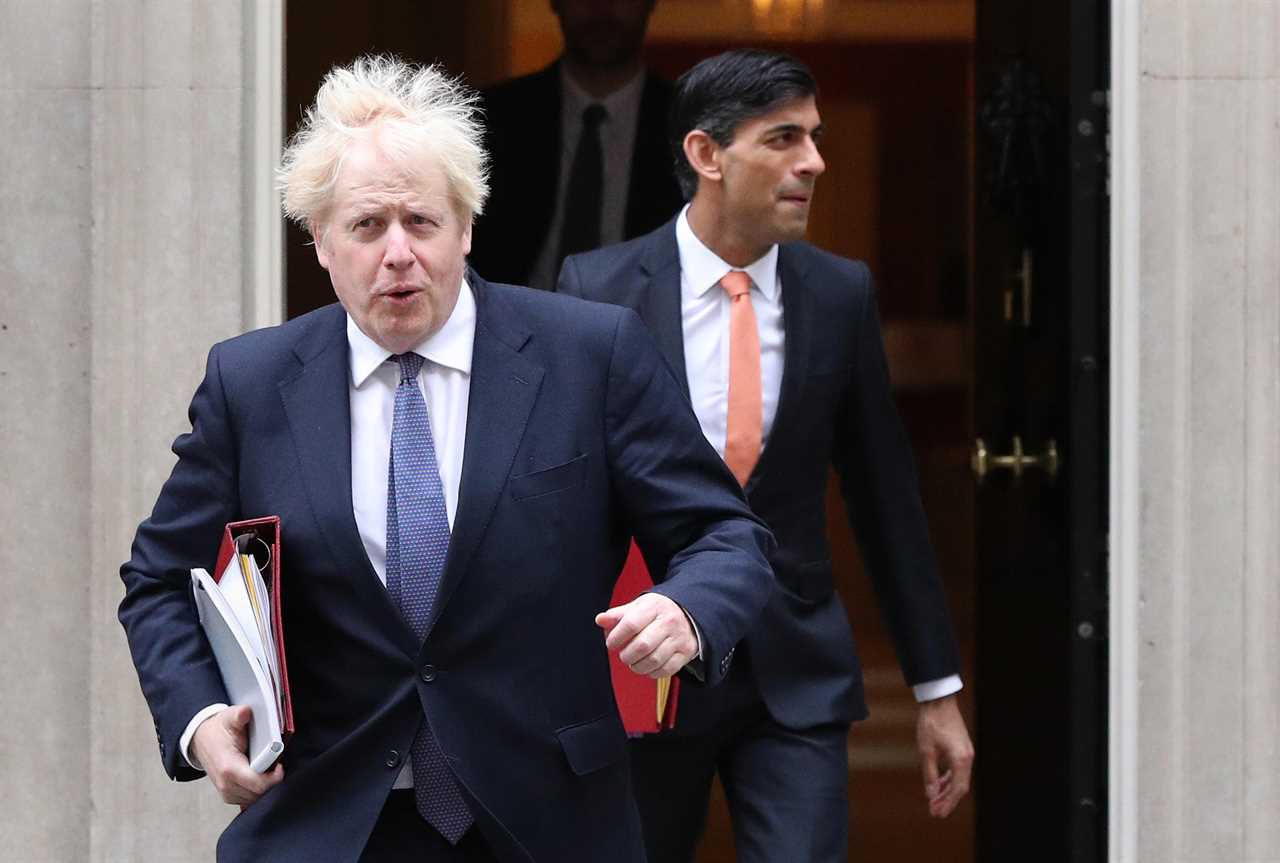 For all the efforts of the Left to stoke terror and alarm, the number of UK deaths from all causes has been running below the five-year average.

Yet astonishingly, a recent US study found 99 in 100 of all those in hospital with Covid were not fully unvaccinated.

For one reason or another, millions here have chosen not to have the jabs or are exempt.

It is not selfish to say the entire country is paying a very high price as a result.

News that Sajid Javid has been laid low was greeted with “I told you so” alarm.

Yet the double-jabbed new Health Secretary proved ­vaccinations work, reporting only mild symptoms from what six months ago was a potential killer.

He is living proof the ­vaccines reduce the impact of the virus — and the risk of spreading it.

Almost certainly, double-jabbed ministers like Boris and Rishi will prove to be ­infection-free.

The Saj probably did not pass it on.

The travesty is that 35million who have also had both jabs will have to self-isolate if pinged.

It must be galling for Boris to see ex-PM Tony Blair hitting the right note yesterday, calling for everyone with two vaccinations to be exempt.

Otherwise, what on earth is the point of being fully jabbed?

For small firms already struggling to find enough workers, even on higher pay, to stay open, Track And Trace is worse than total lockdown.

In high summer, with demand soaring, restaurants, bars and cafes are having to close on Mondays and ­Tuesdays because they cannot hire workers.

GIFT OF THE JABS

Now those sudden and unwelcome phone alerts are closing doors just as the empty tills were beginning to ring again.

Children are being kept back from school in the final days of term, afraid of being pinged at the last moment before their longed-for family flight to Spain or Greece.

It seems only yesterday Boris was insisting we must all learn to live with this virus.

He has dished out the medicine, given us the gift of the jabs, reduced death rates and provided almost total immunity from this ghastly pandemic.

Instead of screwing up ­Freedom Day, he needs to screw up his courage, make up his mind and un-ping us all before this newly glorious ­summer is just another bitter Covid ­memory.