Seven in 10 men are clueless when it comes to signs of deadly cancer – are you?

IT kills more than 11,500 men every year.And yet, despite being the most common type of cancer in men, hardly any of them know the signs of prostate..

And yet, despite being the most common type of cancer in men, hardly any of them know the signs of prostate cancer. 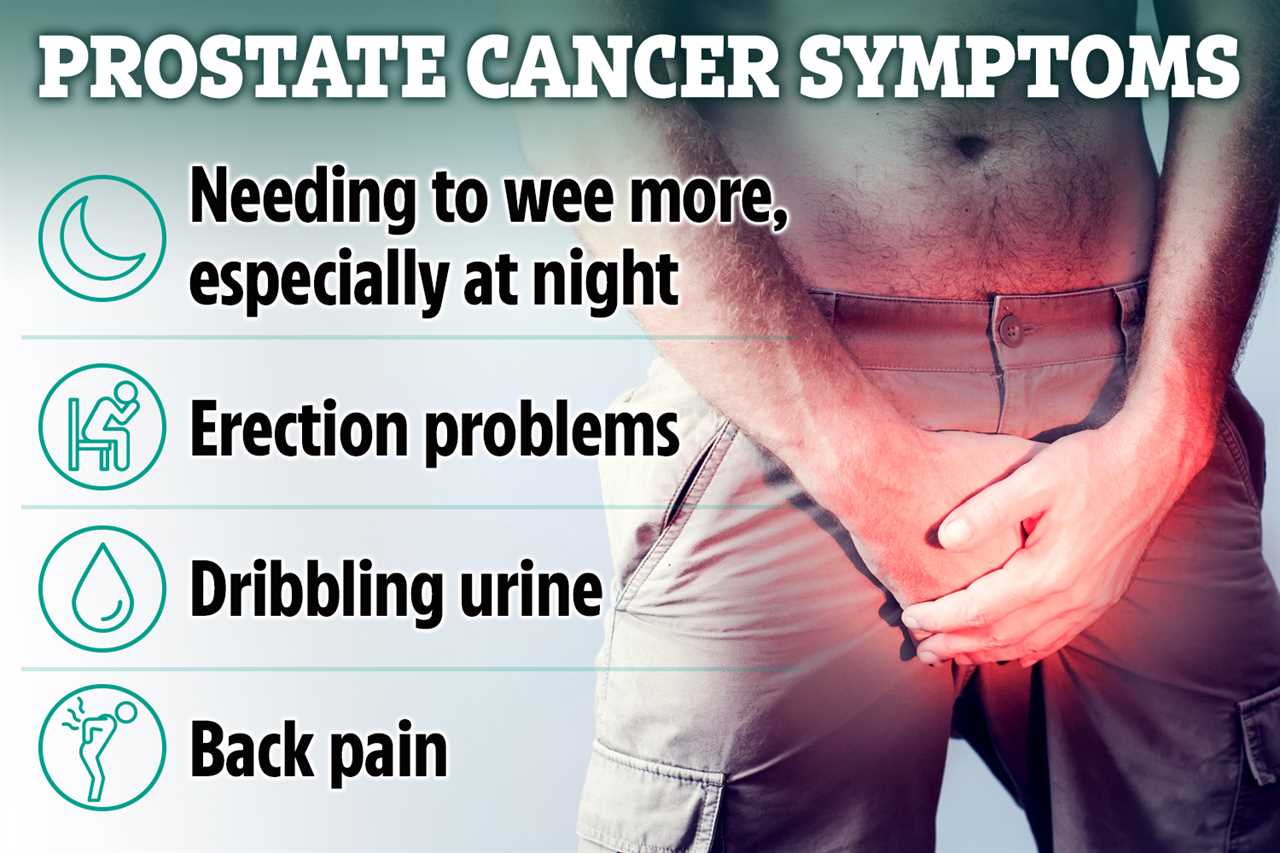 A staggering one in eight men will get prostate cancer in their lifetime.

Most men with early prostate cancer don’t have any symptoms and there is no free NHS screening test like there are for other types of the disease.

But there are some signs that should never be ignored and could mean the difference between getting early treatment or not.

Because they don’t always appear, it’s also important to be aware of who is most at risk.

The prostate is a walnut-sized gland that sits underneath the bladder, with the role of carrying urine out the body and making semen.

A survey carried out for YouGov showed that a shocking seven in 10 men (68 per cent) are clueless about the symptoms of prostate cancer.

Only one in eight men spotted the most recognised symptom, which is having to – or feeling the need to – urinate more frequently.

Possible changes men see, according to Prostate Cancer UK, include:

If prostate cancer has spread, it may cause:

Amy Rylance, head of improving care at Prostate Cancer UK, said: “Prostate cancer is the most common cancer in men, which makes it especially concerning that most men aren’t aware of some basic facts about the disease.

“However, it’s important to note that prostate cancer doesn’t usually have symptoms until it’s already spread. This means men can’t afford to wait for symptoms before they act and should consider their risk instead.”

Older age is a key risk factor for prostate cancer, with very few men under the age of 50 diagnosed.

But the survey found even among men in their 50s, 62 per cent did not know the signs of the disease.

The other two main risk factors for prostate cancer are a family history and being black – with black men more likely to be diagnosed at a younger age.

The survey found that although one in five men have had a prostate check with a medic, many are reluctant to get checked out.

One in five (18 per cent) of all men saying they are “not very” or “not at all” willing to take such a test, including the six per cent who said they definitely would not have one.

Men with higher odds of a diagnosis are urged to talk to their GP. They may be given the option to get tests, but the decision can be difficult to make.

A PSA test (blood test) signals whether there may be prostate cancer by looking at the levels of a protein called PSA that is produced by both normal and cancerous cells.

But many factors can change PSA levels, including exercise, ejaculation and medicines. Therefore, it may lead to more, unnecessary tests, such as invasive biopsies.

The benefits of getting the PSA test, of course, is that it picks up prostate cancer before symptoms are there.

However, assuming prostate cancer is caught in its early stages, treatment is not normally immediately necessary.

In these cases, doctors have a policy of “watchful waiting”.

Because the benefits of the PSA test don’t overwhelmingly outweigh the disadvantages, men are not screened for prostate cancer regularly on the NHS.

Some 47,500 people get diagnosed with prostate cancer every year.

Healthy diet can reduce the risk of prostate cancer – but 60 per cent of men surveyed did not know this.

A high-calcium diet is also thought to increase your risk while eating cooked tomatoes and Brazil nuts could lower it, but more research is needed into the effect of diet.