WE’VE all been adjusting to a ‘new normal’ in recent months, but for one family, the new normal they’re grappling with is utterly devastating.“It’s a ..

WE’VE all been adjusting to a ‘new normal’ in recent months, but for one family, the new normal they’re grappling with is utterly devastating.

“It’s a bit hard to take really – we’re 10 weeks in nearly and it’s still very fresh,” says Abigail Solieri, 33, of her daughter Arianna’s shocking cancer diagnosis. “I still don’t quite understand how we got here.” 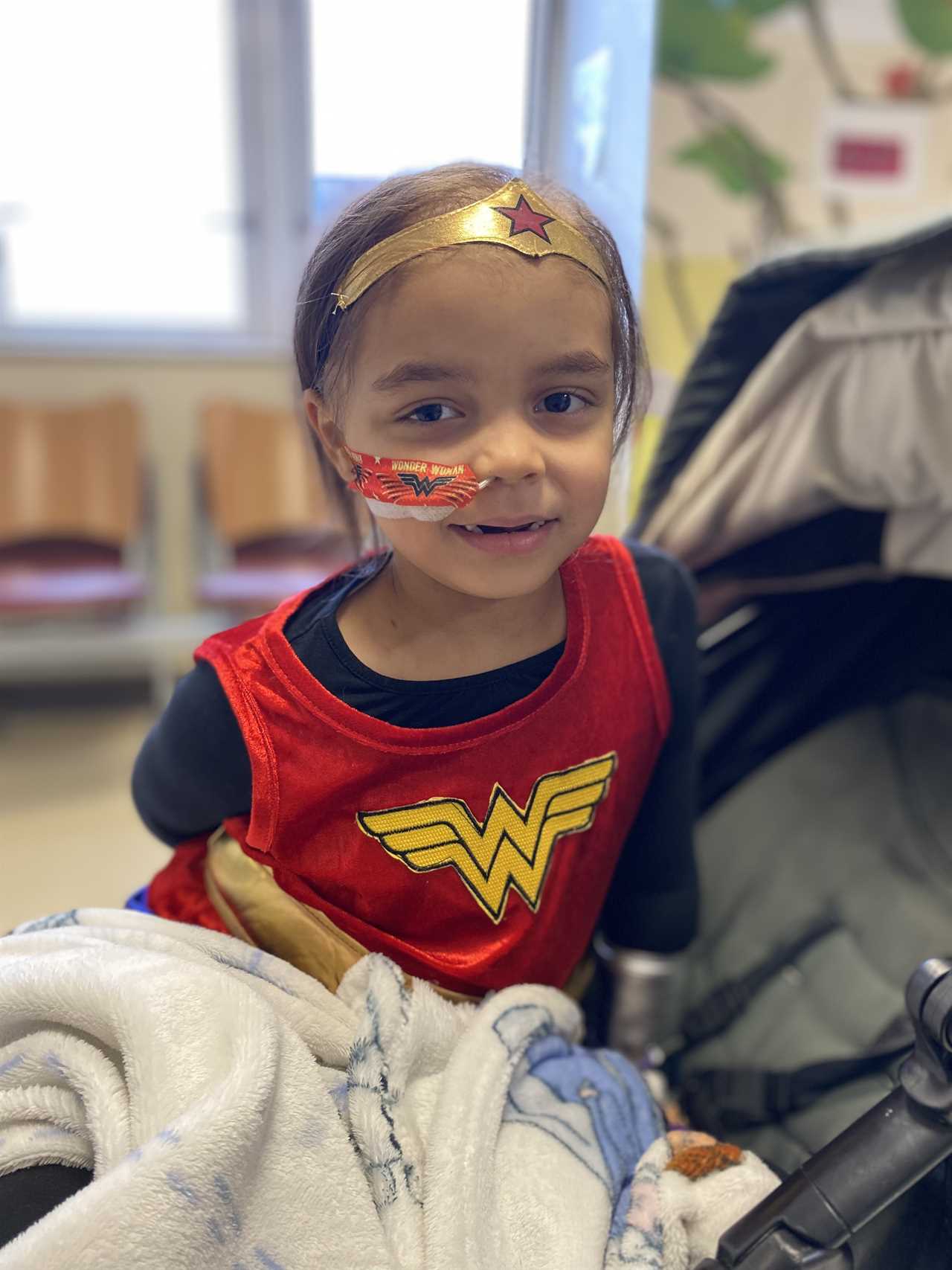 Arianna, 5, wears her Wonder Woman outfit to make her feel “stronger” during procedures and hospital stays 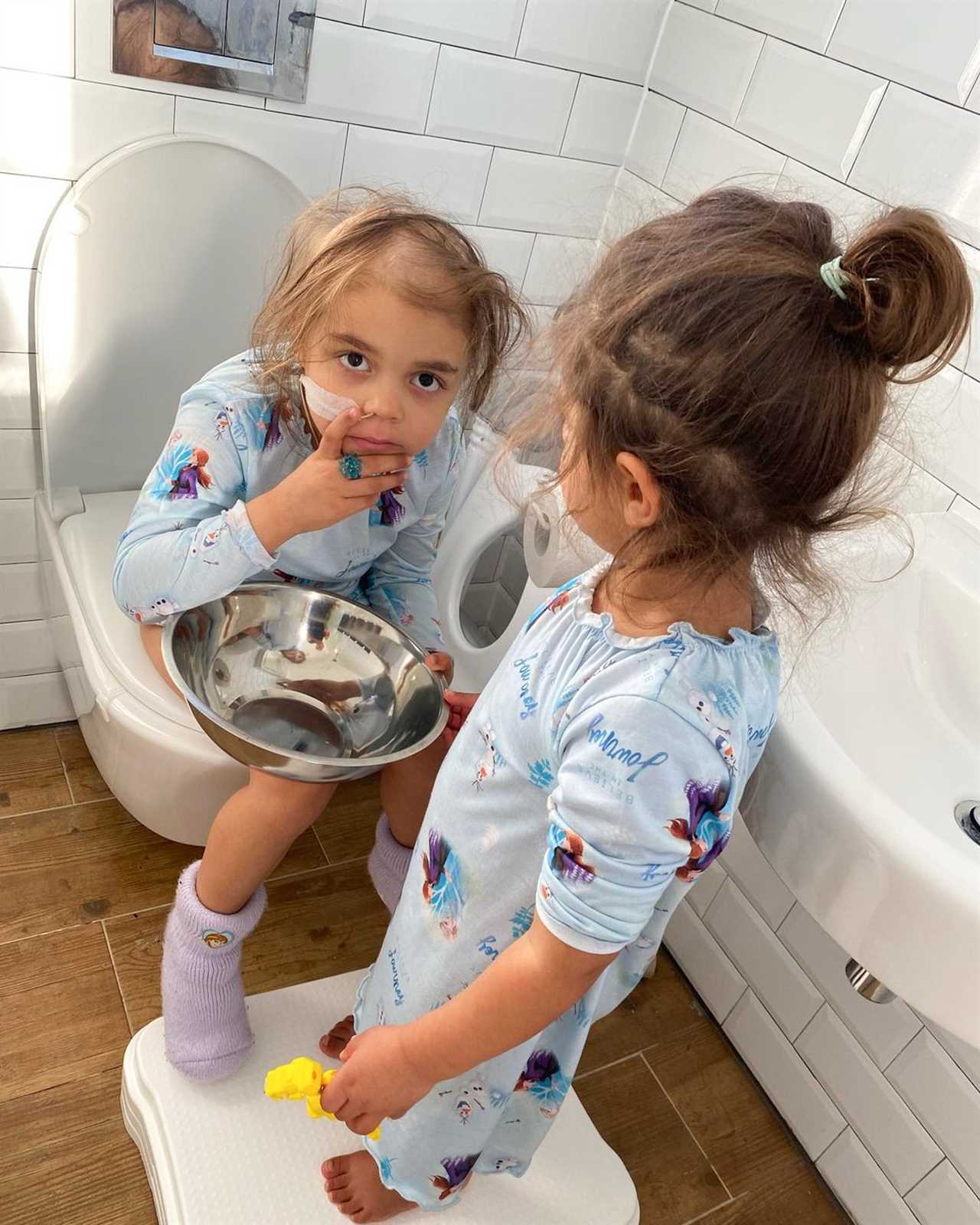 Little Maya, three, jumped to give her sister, Arianna, five, the sick bowl. Arianna is having treatment for a rare and aggressive form of cancer

In November 2021, Abigail and her husband Chris, 34, of Ware, Hertfordshire, were told their eldest daughter, Arianna, 5, has neuroblastoma – a rare type of childhood cancer that affects around 100 children a year.

They thought it was just back pain – and now they’re fundraising for potentially life-saving treatment.

In summer 2021, Arianna started experiencing pain in her upper back but as she’d just gotten a new bed, Abigail and Chris put these twinges down to that.

They took Arianna to an osteopath who clocked a certain amount of muscle tightness and also suspected the new bed was to blame.

“Then it cleared and she was totally fine,” remembers Abigail – who’s also mum to Zara, one, Mya, three, and due with a fourth daughter on Arianna’s 6th birthday, on March 14.

“I did notice her back clicking sometimes if I picked her up or she moved quickly.

“I’d be like, ‘Is that normal?’ And then my dad said to me, ‘You were a very clicky baby actually’. So I didn’t think anything of it at all.”

And then in mid-November, things drastically changed.

Arianna had a playdate with a friend after school and they were running and dancing round the room.

Arianna had eaten three bowls of sausage pasta and seemed totally herself – but then Saturday morning she woke up and said, ‘Oh mummy, my lower back really hurts’.

Abigail was confused: why her lower back? When a few months ago, it was upper back pain?

Arianna ate her breakfast and “seemed a little bit off but not so much that I would be overly concerned,” so Abigail decided to take her to her cousin’s birthday party and see how she got on.

There was a bouncy castle and pizza, but Arianna sat in the corner playing by herself and didn’t join in, “which is really unlike her”.

Then Abigail noticed she was limping.

They left the party and went straight to an urgent care unit, where staff suggested checking Arianna’s temperature – it was slightly raised – and told Abigail to call 111.

Arianna’s pain then “very, very quickly” got a lot worse, so Abigail took her daughter to A&E.

It was to be the first of eight visits in six days, and a week of unimaginable stress and worry, during which doctors thought Arianna had everything from a UTI or kidney infection, to long Covid or sepsis.

Initially she was prescribed antibiotics for a urine infection, but “the next day she was in so much pain. It was waking her up in the middle of the night, and it just was not normal at all,” so they returned to urgent care where they were told to continue with pain relief and antibiotics.

Not happy with the fact Arianna was still not improving, Abigail booked to see their GP, who ordered X-rays and bloods.

“I took a photo of the X-ray because I just knew – you know when you have a gut instinct that something isn’t right? Something wasn’t right,” remembers Abigail.

They were back in A&E that night, where Arianna’s infection levels and inflammation markers were found to be quite high.

“They actually said to me, ‘We suspect something like sepsis or even meningitis,’” Abigail says, but they were sent home, yet again.

This time though a nurse came out to administer intravenous antibiotics and agreed Arianna’s temp was still too high, despite the incredibly strong antibiotics she was on.

Back at A&E the docs suggested Arianna had long Covid, but Abigail was adamant that wasn’t it: “Arianna had Covid about two months prior but she was completely asymptomatic, she had no symptoms whatsoever.”

“I said, ‘That there is something underlying, we just don’t know what it is’.”

Thanks to Abigail’s determination, they gave Arianna a heart and kidney ultrasound – during which the clinician said, alarmingly, ‘I need to get my senior in.’

“Straightaway me and my husband looked at each other and were like, well, this obviously isn’t good.”

Hopes the doctors had discovered signs of a kidney infection quickly faded as Chris and Abigail were told there was a mass – a tumour – above their daughter’s kidney.

“It was just the worst few hours of our lives,” says Abigail.

“It was just horrendous, because it went from literally nothing to nearly a week later, this.”

Following MRI scans, Arianna was diagnosed with neuroblastoma, which had spread to her bones and bone marrow almost overnight – hence why she’d started limping. 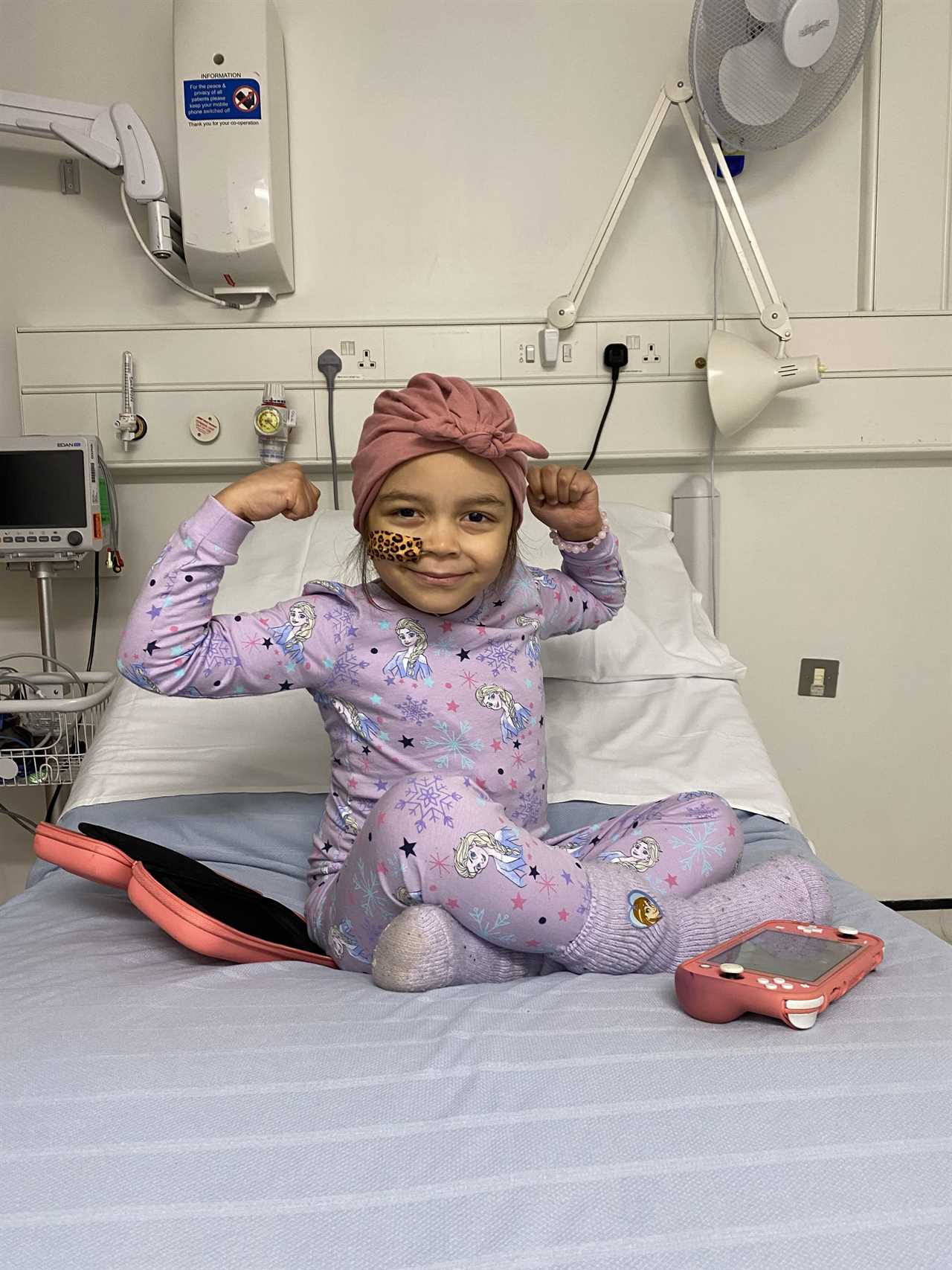 Arianna is spending a lot of time in hospital, hooked up to machines for treatment

Arianna starts her seventh induction chemo cycle on Wednesday (January 26) and after the eighth round, if that goes well and the mass is reduced, the next stage could include surgery, stem cell harvest, and potentially higher dose chemotherapy, as well as immunotherapy and radiotherapy.

Arianna’s surgeons are still debating whether surgery is the best course of action, as the tumour has wrapped around a main artery.

Heartbreakingly, they will also need to operate to preserve Arianna’s ovaries.

“She will pretty much become infertile after all the treatment she’s going through,” says Abigail.

Treatment options are still subject to “the disease getting killed and going to plan, which is what we’re very, very hopeful for,” says Abigail, who radiates extraordinary strength and positivity.

“But naturally, with a neuroblastoma it’s very unpredictable.

“It works very, very differently in every child and sometimes it is more aggressive than others.”

Arianna’s treatment plan could run from 18 to 36 months and another potential side effect is permanent deafness or hearing impairment, a prospect Abigail says is “devastating”.

The survival rate is 40-50%, and of those who survive, there is a 60% chance the cancer will return, dropping survival rate to 5%.

With these terrifying stats to contend with, Arianna’s family are raising funds for further treatment that Arianna is likely to need in the US (https://justgiving.com/campaign/arianna).

The Bivalent vaccine is currently being evaluated in clinical trials in New York and is thought to significantly reduce relapse risk in children with neuroblastoma.

It trains the immune system to identify and destroy neuroblastoma cells lurking in the body after chemotherapy.

Abigail and Chris need $342,000 (£250k) for the procedure, which Arianna would likely need after undergoing immunotherapy.

Despite gruelling treatment every 10 days, constant nausea, having an NG (feeding) tube up her nose and spending around 54 hours hooked up to machines when she’s in hospital – unable to leave her bed except to go to the bathroom –  Abigail says Arianna has been “such a warrior” throughout.

“We call her our little Wonder Woman.

“She loves Wonder Woman and anytime she has procedures or anything like that, she likes to wear her Wonder Woman or Super Woman outfit because she feels stronger.”

That’s not to say Arianna doesn’t get down sometimes.

“Hence why my hair is no longer here anymore,” says Abigail, pointing to her own shorn head.

Arianna’s hair began falling out in hospital, but she didn’t really notice until she got home.

“That was an absolutely devastating time for me and my husband – I just knew it was coming,” says Abigail.

“She was beside herself – I have never ever seen her so upset – and the things she was saying were just awful to hear a five year old say, like, ‘I’m not beautiful anymore.’

Abigail’s sister did the same, showing just how much strength, love and support Arianna is surrounded by, but Abigail admits the diagnosis “has hit our family like a tonne of bricks – and that’s an understatement.”

Abigail wants other parents to know the signs of neuroblastoma and be vigilant, so if their child does have symptoms, they can catch it early enough.

She says she was “oblivious” to childhood cancer in general and wishes she’d known slight back pain could be a symptom: “I’m the most panicked mum ever; honestly, with Covid, I was wanting to wrap everyone up in bubble wrap.

“I was the first one to be like, ‘We’re not leaving the house. We have to stay indoors.

“And maybe we would have caught it before it spread to her bones and her bone marrow – I don’t know.”

According to Cancer Research UK, five children are diagnosed with cancer every day and “it doesn’t matter who you are” says Abigail, who is still reeling from the fact her family is going through this. “It can come out of nowhere.”

Right now, she and Chris are focussed on supporting their “kind, innocent little girl” through treatment and then on to New York.

“We are really hopeful, we’re really positive and we know that Arianna’s going to get through this, but we also know it’s going to be such a difficult time.”

To make a donation to support Arianna’s care and treatment plan, visit https://justgiving.com/campaign/arianna. 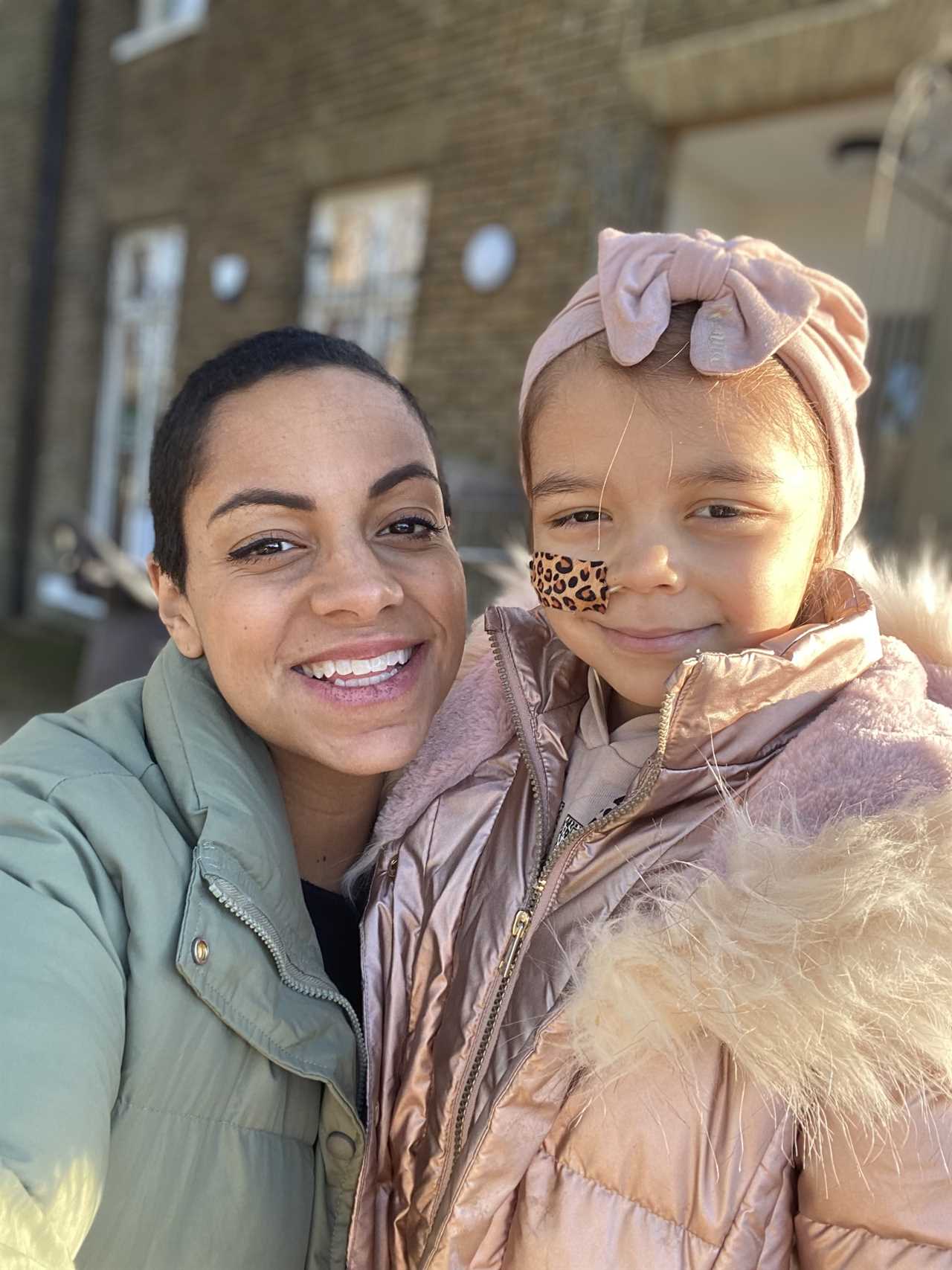 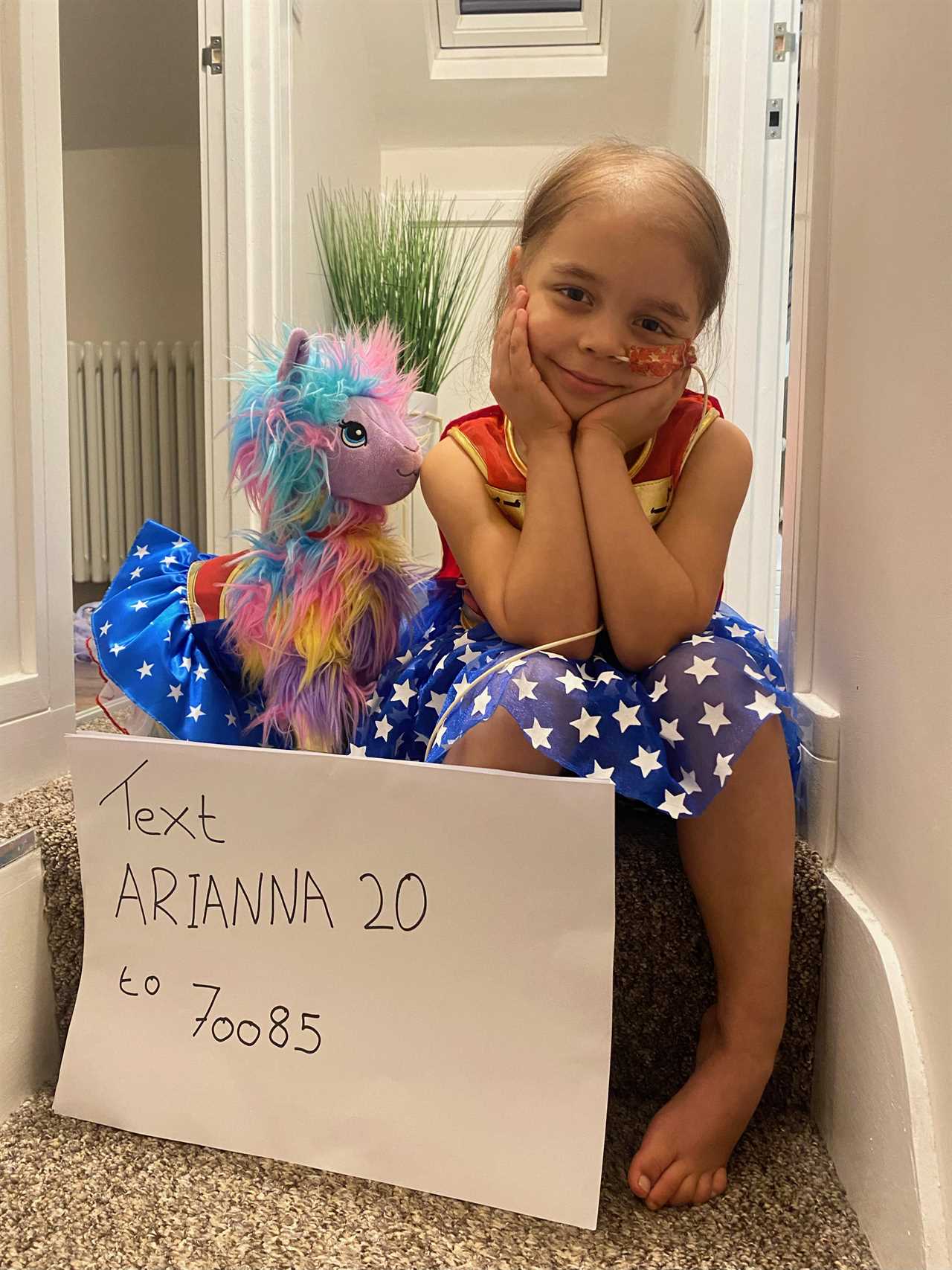