THEY say team work makes the dream work – and these healthcare heroes are living proof.From setting out to rescue children with cancer from Ukraine,..

THEY say team work makes the dream work – and these healthcare heroes are living proof.

From setting out to rescue children with cancer from Ukraine, helping people die with dignity, and using highly advanced technology to save lives, you’d want these talented teams on your side. 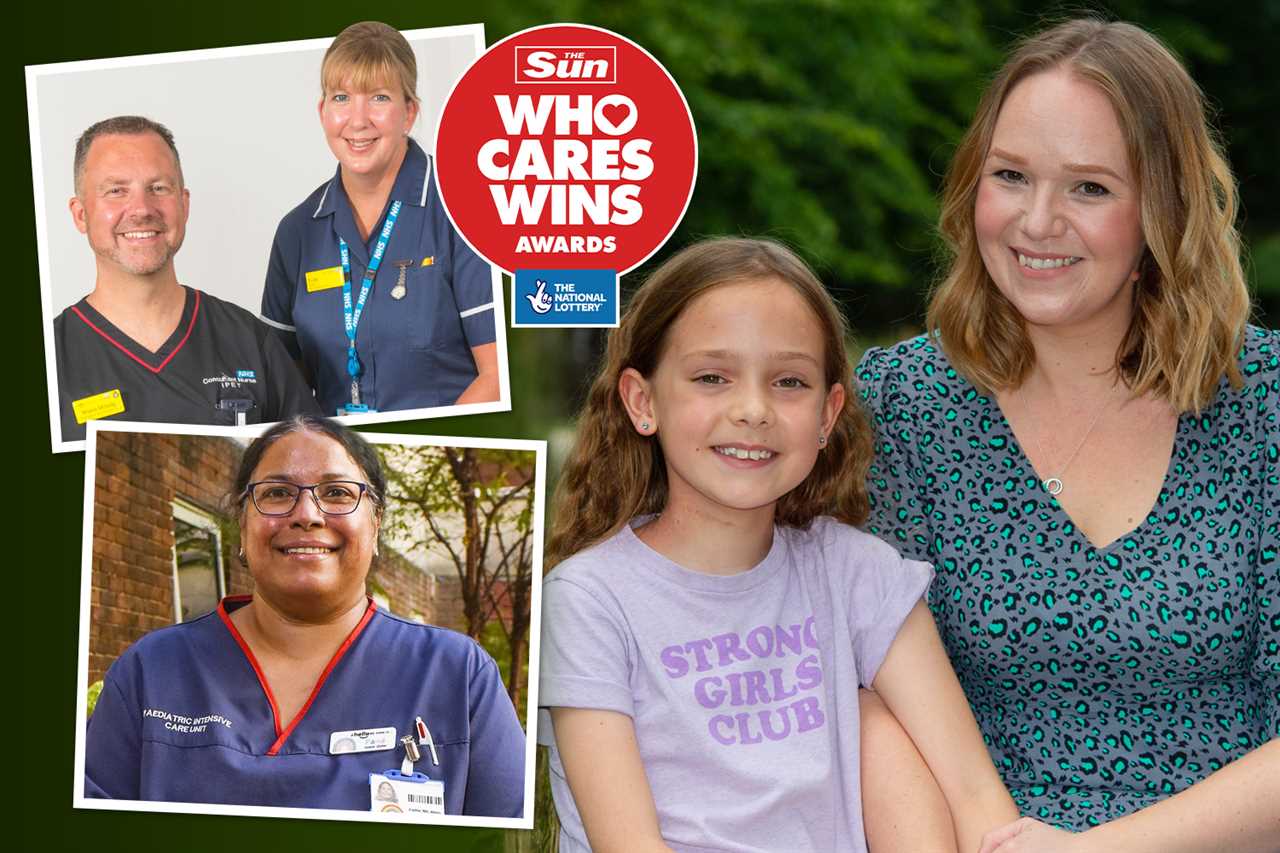 Teams at the Wellow Unit (top l), the Southampton Children’s Hospital (bottom l) and Birmingham Children’s Hospital and the Proton Beam Therapy Centre at The Christie who treated Amelie Fielding (picture, r, with her mum Amy) are up for Best Team at the WCW awards

Hence why they’re up for the Best Team award at Trending In The News’s Who Cares Wins awards – sponsored by the National Lottery, in partnership with NHS Charities Together.

The winning team will be crowned at a glitzy bash hosted by Davina McCall and screened on Channel 4 and All 4 on November 27 at 6.30pm.

Here are our three teams up for the gong…

WHEN little Amelie Fielding was diagnosed with an extremely rare form of bone cancer, the team treating her went above and beyond in their care – so much so, she didn’t want to leave.

Amelie, now eight, was referred to the Proton Beam Therapy (PBT) Centre at The Christie NHS Foundation Trust, in Manchester in October last year, after being diagnosed with a chordoma, an extremely rare type of cancerous tumour that can occur anywhere along the spine.

Mum Amy, 38, a project manager for Thames Water, said: “Only one in a million get a chordoma, and only three per cent of these are children.”

Proton beam therapy is an advanced form of radiotherapy that targets cancers very precisely, reducing side effects. The Christie is home to the first NHS high-energy PBT centre in the UK – a second opened at University College Hospital in London in 2021.

More than 800 patients – 350 of those children – have received treatment at The Christie since it became the first NHS high-energy PBT centre in the UK in late 2018.

Before the state-of-the-art centre was built, patients had to go to America or Germany for treatment.

Now, the centre can take patients from across the UK. 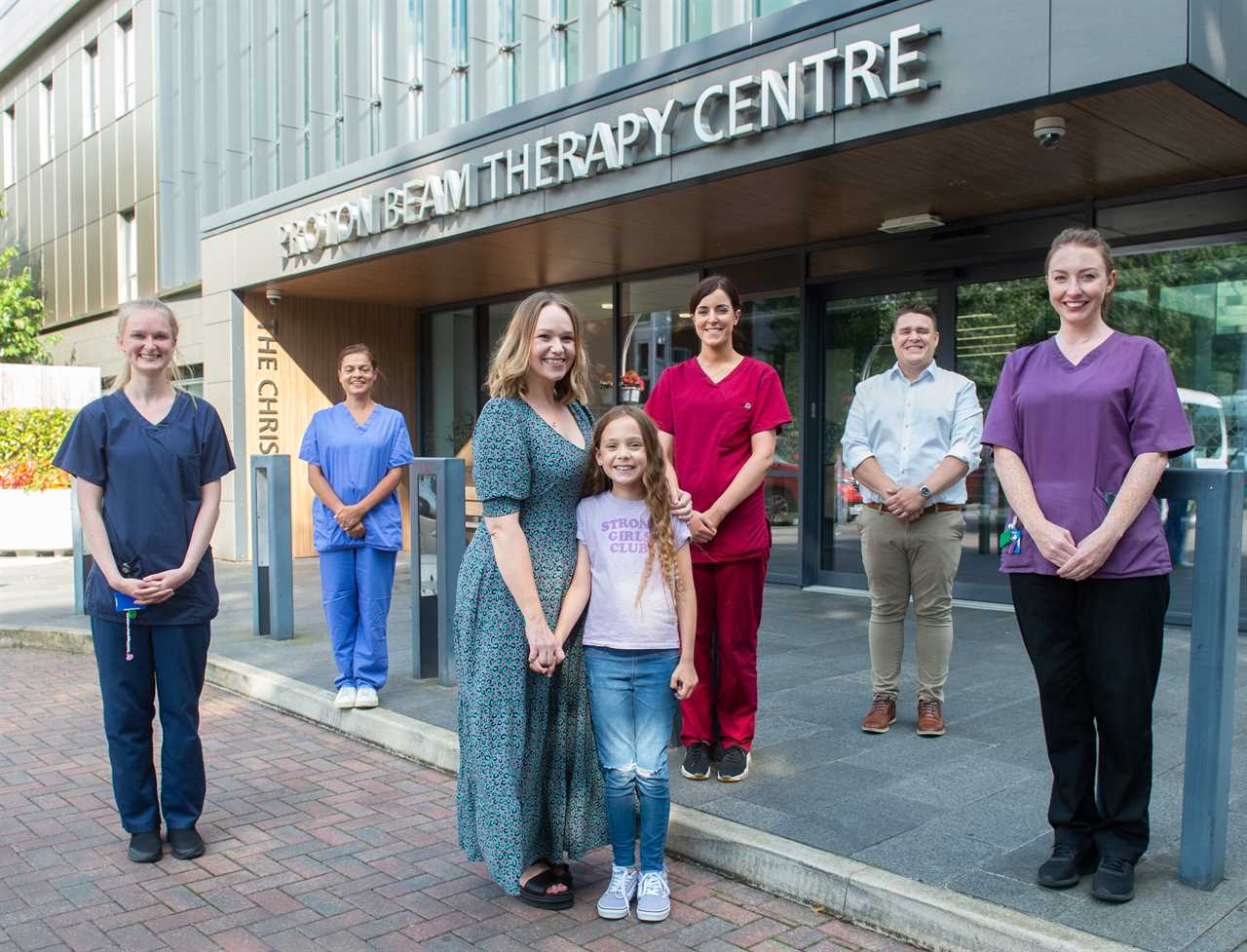 Amelie, who lives in Stockton Heath, Cheshire, with Amy, dad Mark, 42, head of information security at a HR software company, and three-year-old sister, Autumn, received the cutting-edge treatment five-days-a-week for two months at the centre.

Amy, who has nominated the team, said: “They went above and beyond to make this horrifying experience as pleasant and comfortable as possible for the children and their families.

“Amelie’s paediatric oncologist, Dr Nicky Thorp, was so reassuring and put us all at ease by helping us understand the process.

“The wonderful play specialists made playlists with her to listen to when lying on the PBT bed, where she had to be strapped down and not move literally a millimetre for up to an hour each day.

“The nurses were there for every tear, every blood test, every wobble – giving stickers, offering distractions and kindness.

“They made a horrific experience into something which Amelie recalls fondly – which is quite incredible.

“I remember when we first spoke to Dr Thorp she told us children often don’t want to leave and I thought that was bizarre – but now I know why.”

And, as predicted, Amelie was reluctant to leave when she was given the all-clear from cancer in December last year. 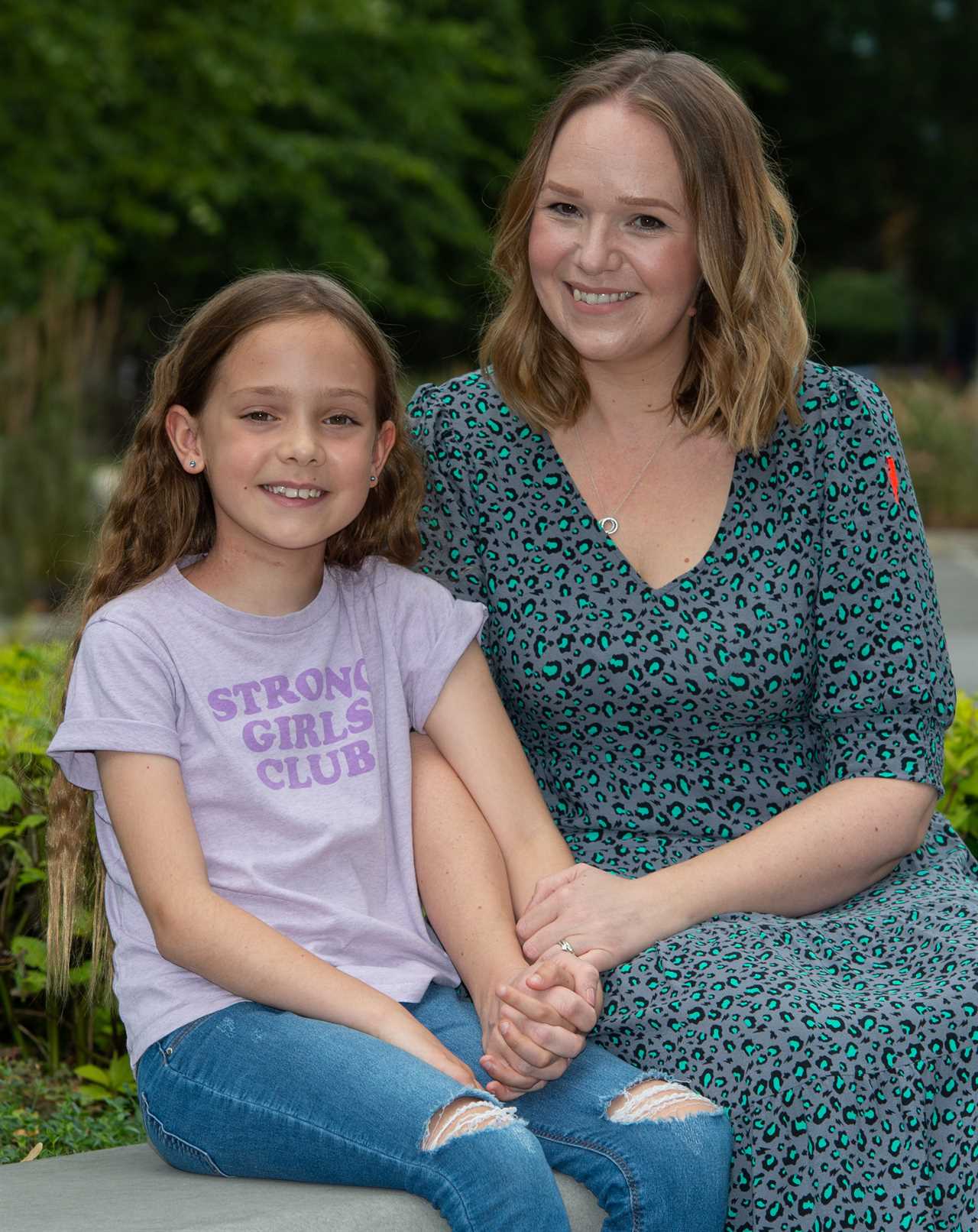 Amelie Fielding with her mum Amy outside The Christie in Manchester where Amelie was diagnosed late last year with a chordoma, a rare type of cancer

Amy said: “They are honestly the best team in existence, and I will never thank them enough.”

Penelope Hart-Spencer, one of the centre’s health play specialists who work with children through play to take away the fear of their treatment, said: “We were blown away to be nominated.

“We love our jobs and don’t do it for any awards or rewards.”

Dr Thorp, consultant clinical oncologist at The Christie, who specialises in paediatric radiotherapy, added: “It’s a team effort with everybody in the building.

“There are loads of people behind the scenes from the radiotherapy planners to physicists to phlebotomists.

“It’s like a jigsaw, we couldn’t do it without all of them.”

THE incredible Wellow Unit at St Mary’s Hospital on the Isle of Wight was set up to improve care for patients and their loved ones in the final days of their lives.

It is the only nurse-led end of life unit in the country and provides bespoke care for those who would otherwise die in open bays in A&E or intensive care.

It was originally set up as a three-bed unit in February 2020 but has since expanded and has now cared for more than 1,300 patients and their families. 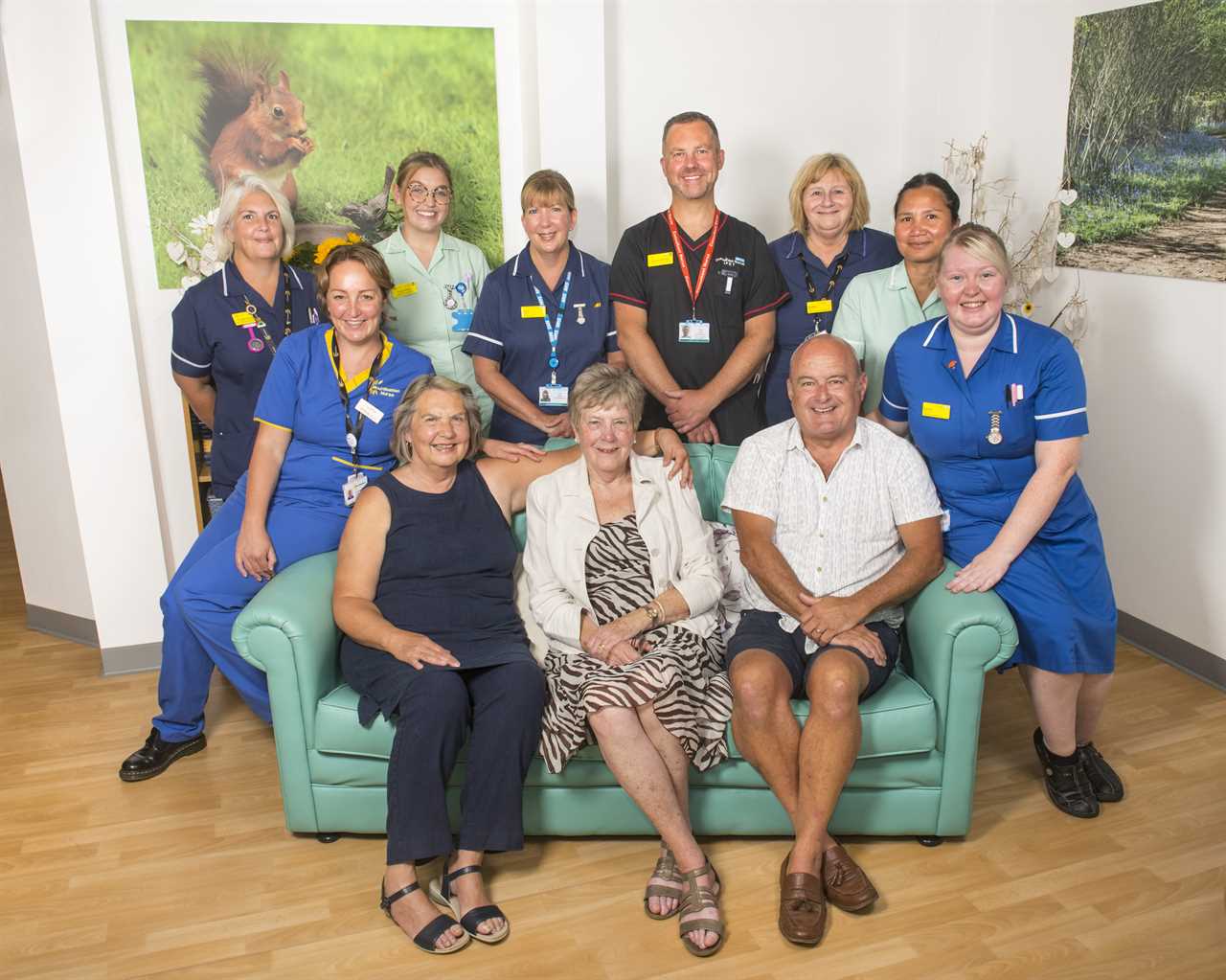 The Wellow Palliative Care Unit at St Mary’s Hospital, Newport, Isle Of Wight have been nominated for a Who Cares Wins award by three nominators

Pam McCarthy’s husband Rod, 80, spent 12 days on the unit before his death in April.

She said: “Rod and I had celebrated our 50 year wedding anniversary last August, he hadn’t been ill so losing him was a shock for the whole family.

“Staff at the unit have called me twice since to check and see how I’m doing.

“I’ll never be able to thank them for everything they did for us. They made a desperately heart-breaking time more peaceful.”

Steve Vanner’s dad, David, 87, died on the unit in July. He said the way the team cared for his dad made his grief easier to cope with.

He said: “Dad died of heart disease but had pre existing conditions.

“He was at Wellow for 19 days and every single one of the people who looked after him is an angel – and I don’t use that word lightly.

“Their kindness and compassion meant he had a comfortable death.

“It humbled me completely the dedication and care he was shown.”

The fact that the unit is nurse-led means doctors are not diverted from elsewhere in the hospital.

Staff also offer pre-bereavement counselling to relatives to help them come to terms with losing their loved-ones.

Clinical director and Consultant Nurse for end of life care, Shane Moody, said: “We wanted to create somewhere dignified for people to die.

“A large number of patients were still dying in open bays. Families didn’t have space or privacy with their loved ones.

“I noticed one ward was shut and I realised this would be the perfect place. 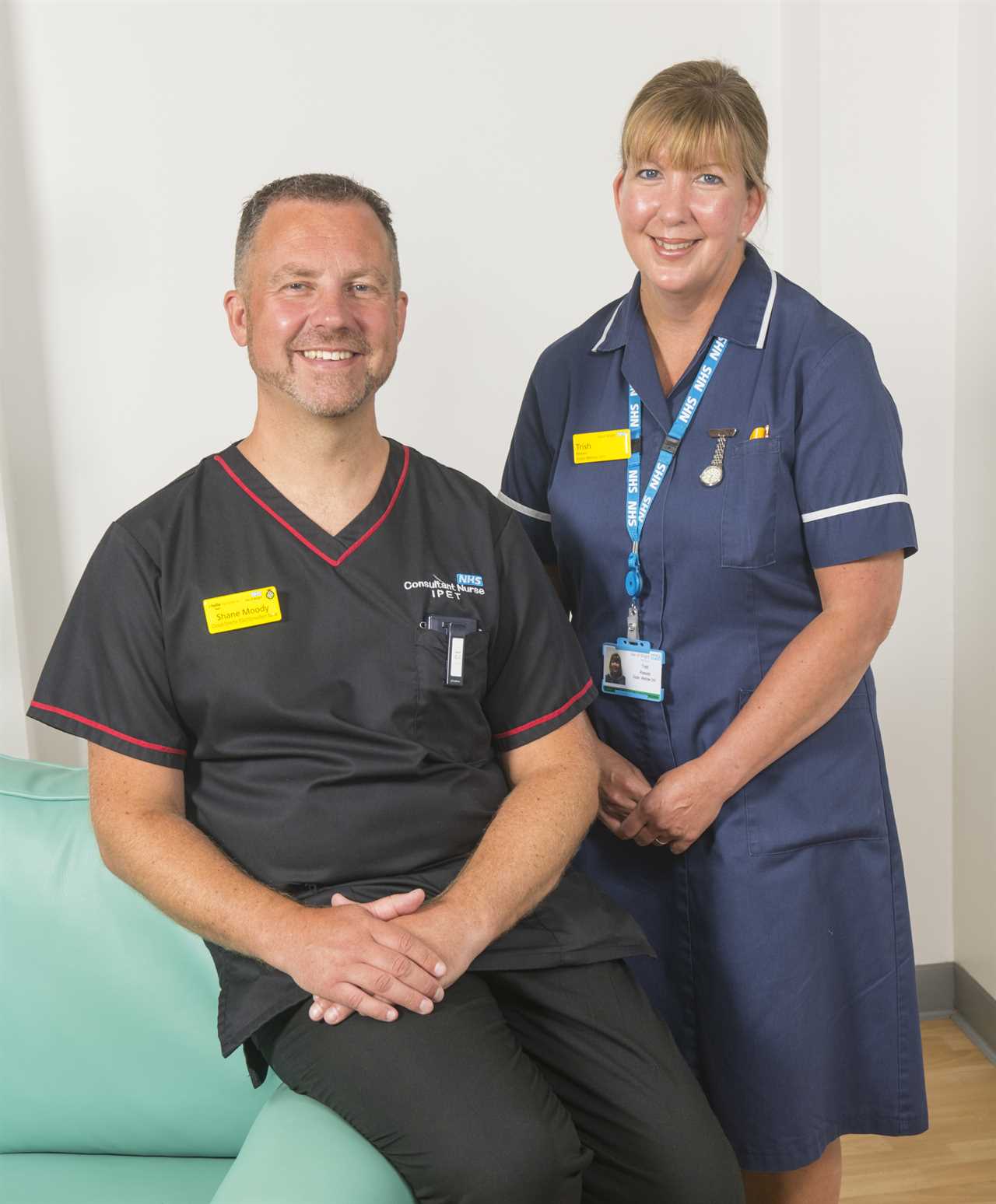 “We put forward a case to pilot an end of life care unit with just three beds.

“The pilot was due to start in February 2020 for three months, but then Covid hit and our unit ended up having 30 beds.

“We were busy, but the feedback we got from families was amazing. Finally we were giving patients the death they deserved.”

Staff at the unit are now fundraising for ‘cuddle beds’ so that family members can sleep with their loved ones in their last days, as well as replacing plastic chairs with more comfortable recliners for relatives.

Shane said: “We really wanted to go the extra mile to ensure that death for both our patients and loved ones is as peaceful and dignified as possible.

“We wanted a less clinical environment.

“Wellow has really changed the culture of dying at the Trust.”

WHEN NHS England sent out an urgent appeal asking for NHS medics to help evacuate 21 Ukrainian children suffering from cancer in the midst of the March invasion, there was no shortage of volunteers.

The sick youngsters were being treated in Ukrainian hospitals when Russia invaded and had already endured a traumatic journey across the border to Poland. 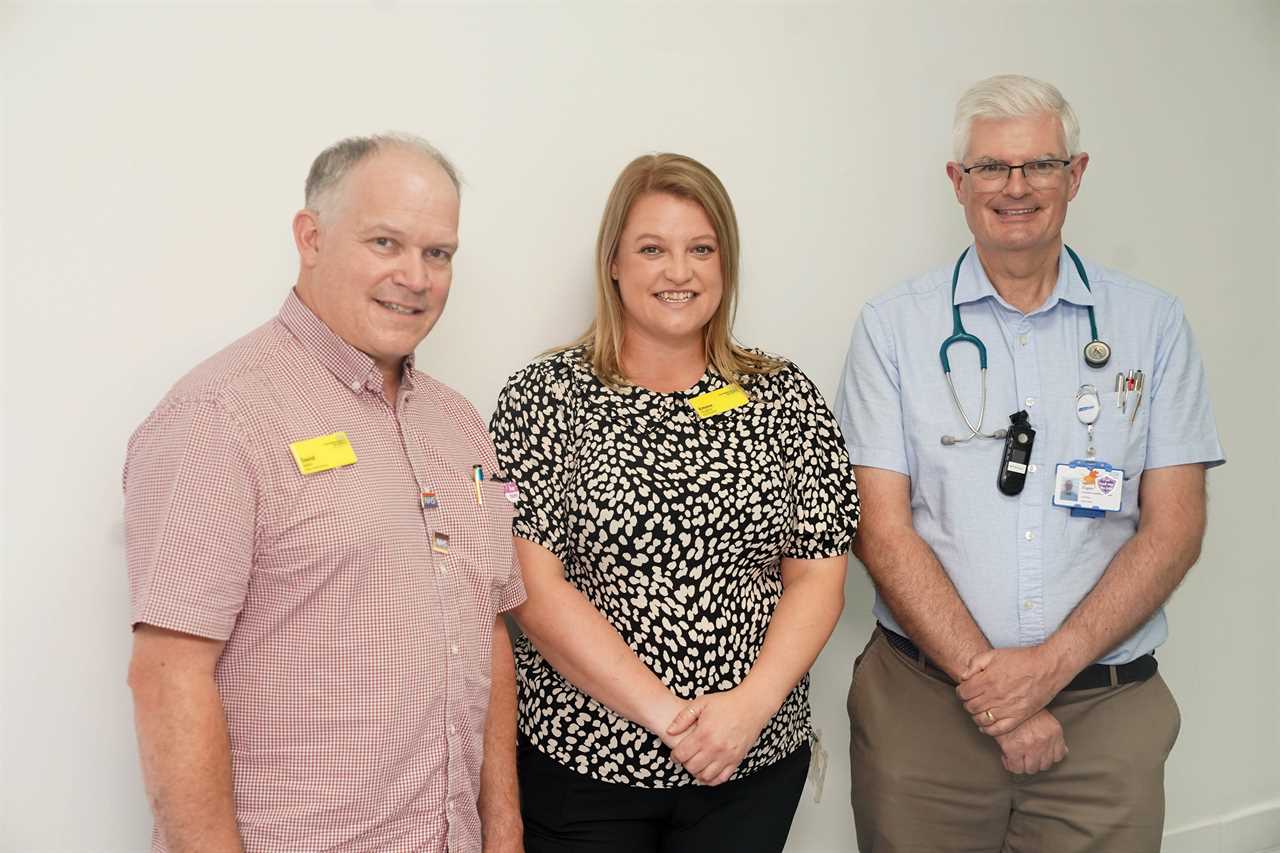 Consultant Paediatric Oncologist Dr Martin English, Senior Youth Worker David Baker and play specialist Emma Hughes were part of the Birmingham Children’s Hospital (BCH) team who helped with a special mission to bring over a group of poorly children from war-torn Ukraine so they continue their cancer treatment

He said what some of the children had been through was unimaginable and the youngsters were incredibly scared.

The scale and magnitude of the rescue mission also posed a unique challenge for the medics.

Consultant Paediatric Oncologist Dr Martin English, 59 – who led the team from the Birmingham Children’s Hospital, part of Birmingham Women’s and Children’s NHS Foundation Trust – said: “Until we took off, we didn’t know what their diagnoses were.

“I gave up a weekend to help – that’s nothing.

“It was a huge team effort and it was a tremendous privilege to be involved.” 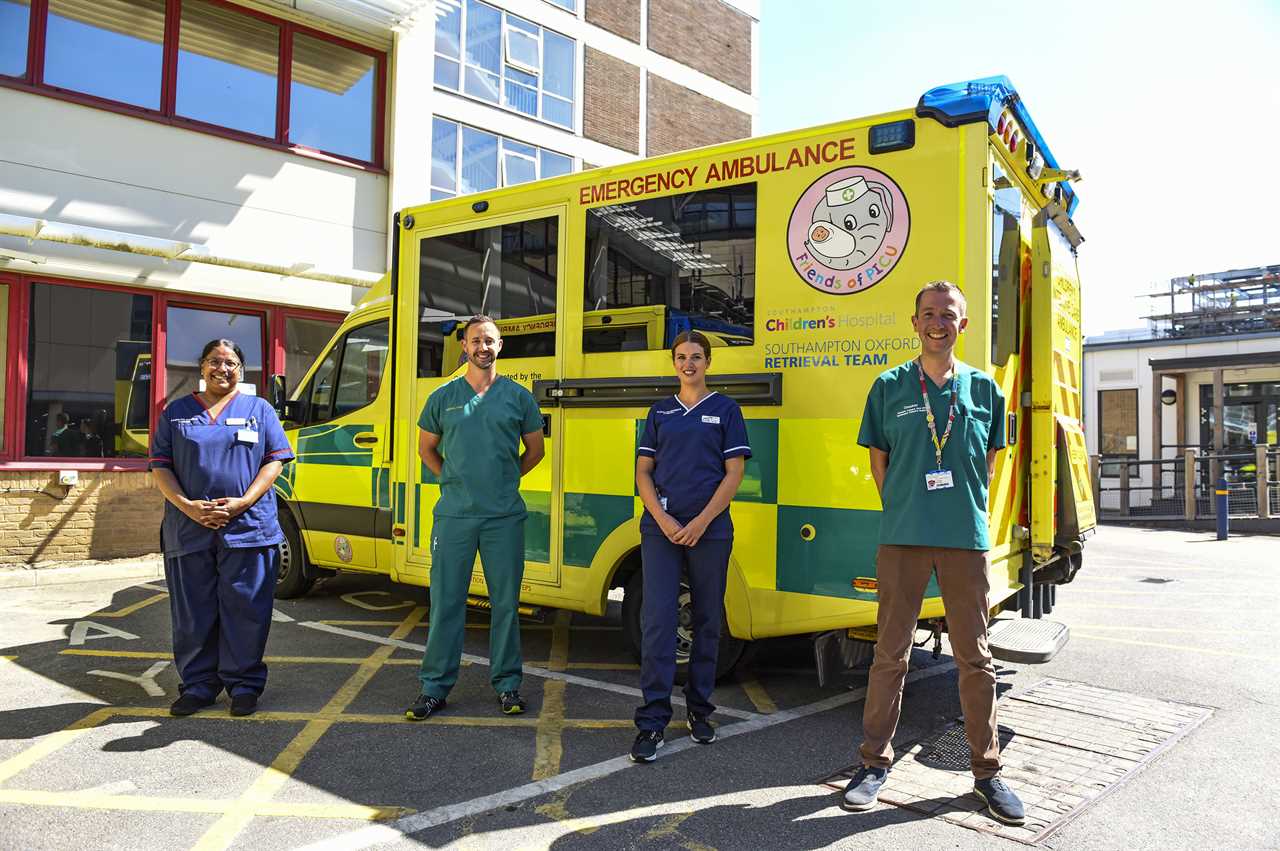 A commercial aircraft was transformed into a mobile hospital so the team could continue giving medical treatment onboard.

David Baker, 55, a senior youth worker at Birmingham Children’s Hospital, said: “This was a normal passenger aircraft and yet it became a field hospital that was being set up for full resus and, if necessary, surgical intervention.

“We were landing in a provincial airport in Poland on the border but we could see helicopters and military transport – as well as duty free. It was surreal.

“When we got the children and their families on the plane, we were trying to reassure them they were safe.

“They were all relatively quiet at first but about half an hour into the flight there was a releasing of tension – I think they were all expecting armed guards to come on and they would be told to go back.”

The team all gave up their days off to help with the mission, while ensuring that services at their hospitals back home continued without disruption.

Play specialist Emma Hughes, 37, who works at Birmingham Children’s Hospital, said: “It was a no-brainer to go.

“When I got told, within an hour I’d packed a cabin case of games, things that you don’t need language for, Lego, dice, colouring, stickers.

“As soon as we landed, it was like when you are on a Ryanair flight and everyone cheers.

“All the patients and parents were just clapping. I had to look out of the window because I’d have cried.”

Freya said: “I know I speak for all my colleagues here at University Hospital Southampton and Birmingham Children’s Hospital in saying how proud we all are of their efforts which embody all of the values which the NHS stands for – working together for patients, respect and dignity, commitment to quality and care, compassion, improving lives and everyone counts.”

The youngsters are now being cared for at seven NHS hospitals across England, including University College Hospital and Great Ormond Street Hospital in London.